Henry Burris is taking the Ottawa Redblacks back to the Grey Cup. Burris threw two TD passes as Ottawa held on for a wild 35-23 win over the Edmonton Eskimos in a snowy East Division final Sunday. 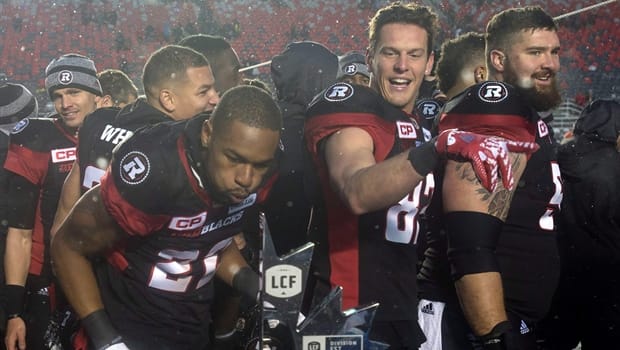 Kienen Lafrance put the Ottawa Redblacks on his shoulders Sunday.

The sophomore running back came off the bench to run for 157 yards and a key touchdown to give Ottawa an exciting 35-23 win over Edmonton in a snowy, windy East Division final. The Redblacks, who lost the 2015 Grey Cup 26-20 to the Eskimos, will face the Calgary Stampeders in this year's game on Sunday at BMO Field in Toronto.

Ottawa seemed headed to a comfortable win after surging to a 25-3 lead in the third quarter on Tristan Jackson's 75-yard punt return TD and Patrick Lavoie's two-point convert. But Mike Reilly, who threw for 340 yards, rallied the Eskimos with three TD strikes, including a 57-yard pass to Adarius Bowman that cut the Redblacks' lead to 28-23 with 3:15 remaining.

That put the onus on Ottawa's offence to try and run out the clock. But Lafrance, who replaced injured starter Moses Madu (upper-body injury) in the first half, took it a step further, scoring on a 20-yard run with 45 seconds left that capped an eight-play, 70-yard drive and cemented the win.

"Before our final drive, [offensive co-ordinator Jamie Elizondo] got the offence together and said, 'If we call ourselves the best offence, which I know we are, we will run this clock down and we will take a knee and finish this game out,"' said Ottawa quarterback Henry Burris. "And then Kienen stepped in and said, 'Guys, give me the hole. This is why I'm here, I'm here to get us to the Cup and win the Cup."'

"He's a Manitoba Bison so if there's anybody used to running in these conditions, it's a guy from Manitoba. I'm pretty sure a lot of fantasy football owners are upset they didn't have Kienen Lafrance this week because he did a heck of a job."

Lafrance, a 2015 sixth-round draft pick who'd run for 163 career yards before Sunday, only smiled when told of Burris's comments.

"That's what he said," a beaming Lafrance said. "Well, it was mid-game so I can't confirm it.

"But of course, I want the ball every play."

Weather was the major storyline in a contest played on a wet, snow-covered field courtesy of the city's first winter storm. While the white stuff fell throughout the contest, the biggest challenge was the wind, which blew at about 37 kilometres per hour, gusting at times to 49 km/h.

The start of the second half was delayed briefly as stadium officials worked to repair lines on the field. They had been scrapped away while crews shovelled the snow off the turf.

A paint machine was brought out to make the repairs but it ceased working, forcing one crewman to re-paint the lines by hand. The nasty conditions were no deterrent to the hearty TD Place sellout crowd of 24,248, many wildly ringing cowbells throughout the game.

Edmonton gambled to open the second half by taking the ball and wind after winning the toss and deferring its choice. After the two teams traded TDs, the Eskimos faced having to erase a 15-point deficit going into the wind in the fourth.

"We got down points but with the type of locker-room and team we have you're never going to be down too many to come back from but obviously it didn't help matters," said Edmonton coach Jason Maas, who served as Ottawa's offensive co-ordinator last year. "We felt we'd have to play 60 minutes of great football to beat them and obviously we came up short in doing that.

"I didn't think the weather played a huge factor, to be quite honest with you. If anything, it was kind of a cool thing to play in."

'We all remember the feeling last year'

"The ball was like a slippery noodle unless you had the laces," Burris said. "It was tough sledding out there."

Added Campbell: "The snow and wind weren't crazy . . . it was how much snow had accumulated on the field and that definitely made a difference. But [Saturday] I told [Redblacks players] the CFL stands for Canadian and when it's late November none of us should be surprised when weather hits. We talked about not letting weather get between us and our goal and our guys just rolled with the punches and did what they had to do."

Afterwards, the Redblacks accepted the East Division trophy from CFL commissioner Jeffrey Orridge but refused to touch it. Last year, the club was just happy to be in the Grey Cup game but now has its sights firmly on winning it.

"We're thrilled and excited to win this thing because it's a big deal," Campbell said. "We all remember the feeling last year standing in the locker-room not finishing the task.

"We'll celebrate this for a few hours but [Monday] we meet and make sure we move on to the next thing because there's one more to go."

Bowman finished with two TDs for Edmonton while Whyte kicked a field goal and two converts.