Andrew Harris rushed for one touchdown and caught another as the Winnipeg Blue Bombers ended a 29-year championship drought by beating the Hamilton Tiger-Cats 33-12 in the 107th Grey Cup in Calgary.

Harris scored rushing and receiving TDs as Winnipeg stunned the Hamilton Tiger-Cats 33-12 before 35,439 spectators at McMahon Stadium for its first Grey Cup victory since 1990. Harris put an exclamation mark on his stellar performance (134 yards rushing, five receptions for 35 yards) by becoming the first player ever to be named the game's top player and Canadian.

Harris, 32, of Winnipeg, is the first Canadian to capture Grey Cup MVP honours since legendary Ottawa quarterback Russ Jackson in 1969.

"That sounds good but the only trophy I want is the big silver one," said Harris, who upon signing with Winnipeg in 2016 made ending the city's Grey Cup drought his top priority. "It's surreal, it's amazing, it's a dream come true. 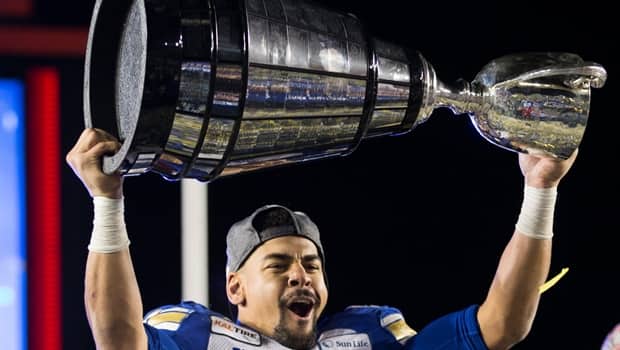 1 year agoVideo
2:37
Andrew Harris became the first player to win both Most Outstanding Player and Most Outstanding Canadian.  The defence also came up big in Winnipeg's 33-12 win over Hamilton. 2:37

"I'm so proud to be a Winnipegger. I can't wait to get back and share this with all of them."

The Bombers earned $16,000 apiece for the victory while Ticats players — who wore their home black uniforms and were 10-0 this season at Tim Hortons Field — received $8,000 each. More importantly, Winnipeg ended its 29-year championship drought.

Harris, who earned his first Grey Cup in 2011 with B.C., served a two-game suspension this season following a positive drug test. That led to his being snubbed for the league's individual honours despite leading the CFL in rushing for a third straight season (1,380 yards).

"I just wanted to prove it to my teammates and deliver for my teammates," Harris said. "Everything else is whatever.

"We just wanted to win this game. We've been underdogs (and) counted out all year and even for myself I've been counted out and disrespected. It was a Blue Bomber-style game and that's how we wanted to do it."

Collaros had spent time this season with Saskatchewan and Toronto — he was traded by both teams — before landing with Winnipeg in October. He'd missed significant time recovering from a season-opening concussion suffered against Hamilton, which earned Ticats linebacker Simoni Lawrence a two-game suspension.

"Collaros has been great," said Harris. "Hopefully we can see him around our locker room."

Collaros, 31, completed 17-of-23 pass attempts for 170 yards. The six-foot, 219-pound American, who won a Grey Cup with Toronto in 2012 before guiding Hamilton to the '14 title game, is scheduled to become a free agent in February.

Streveler completed all three of his passes for 39 yards and a TD. Despite being plagued by a foot injury, he also ran nine times for 30 yards as 186 of the Bombers' 408 offensive yards in the game came on the ground.

Winnipeg also held the ball for 35 minutes in the game.

"We did get the running game going," said Blue Bombers head coach Mike O'Shea. "I thought Andrew had great vision . . . the offensive line was just pushing guys around.

"And then you throw in Strev, he ran really hard. Man, he's as tough as they come."

Hamilton came in as the solid favourite after a dominant '19 season. The Ticats posted a CFL-best 15-3 regular-season mark, a single-season franchise record.

But the Ticats had no answer for a tenacious Winnipeg defence that forced seven turnovers — three coming on Ticats' first four possessions — and six sacks. The Bombers had a plus-12 turnover ratio in the playoffs and over three games allowed 39 total points.

"They're a very special group and they made their special moments today," said Bombers defensive co-ordinator Richie Hall after winning his fourth career Grey Cup."The ball is most important.

"All three phases played well through the playoffs," he said. "But the defence today, boy, did they shine."

The Bombers' tough, rugged style of play on defence was very reminiscent of how O'Shea — a three-time Grey Cup champion as a player with Toronto — patrolled his area as a middle linebacker.

"I wouldn't make this team," he said.

Hamilton starter Dane Evans, who was pressured by Winnipeg's defence all game, finished 16-of-27 passing for 203 yards with a TD and two interceptions. He also fumbled three times.

Steinauer tipped his cap to the Bombers following the contest.

"We just couldn't grab momentum and credit them," he said. "Hats off to Winnipeg, Mike O'Shea and his staff.

Winnipeg (11-7, third in West Division) became the first third-place finisher to win the Grey Cup since the '05 Edmonton Eskimos. And after going 3-6 during the season on the road, the Bombers ended their dubious streak with a third straight road victory and fourth overall under Collaros.

"I've packed too many garbage bags," said an emotional Adam Bill, the Bombers middle linebacker who earned his second Grey Cup title. "I only play this game to win championships.

"We're bringing it home to Winnipeg, it doesn't get any better than that."

Hamilton pulled to within 24-12 with Evans' four-yard TD strike to Addison at 11:43 of the third but the two-point convert was unsuccessful. Banks suffered a lower-body injury in the drive and didn't return. Justin Medlock booted a 41-yard field goal with three seconds left in the third and a 17 yarder with 6:33 left in the fourth to stretch Winnipeg's lead to 30-12.

The combination of Harris and an aggressive defence staked Winnipeg to an emphatic 21-6 half-time lead. Harris ran five times for 53 yards and a TD while registering four catches for 35 yards and a touchdown.