The issue of concussions in football, specifically in the CFL, is once again in the spotlight after Montreal quarterback Johnny Manziel took a hellacious hit during last Saturday's game against Ottawa.

League has not admitted link between football and brain disease

The issue of concussions in football, specifically in the CFL, is once again in the spotlight after Montreal quarterback Johnny Manziel took a hellacious hit in the third quarter of last Saturday's game against Ottawa.

Manziel was rocked by the Redblacks' Jonathan Rose at the goal line, fumbled the football on the hit and crumpled to the turf. As he ran to the sidelines after the play, he was seen shaking his head and appeared woozy. Manziel was back on the field for the next offensive series and finished the game, prompting some to question why he was allowed back in the game so quickly. 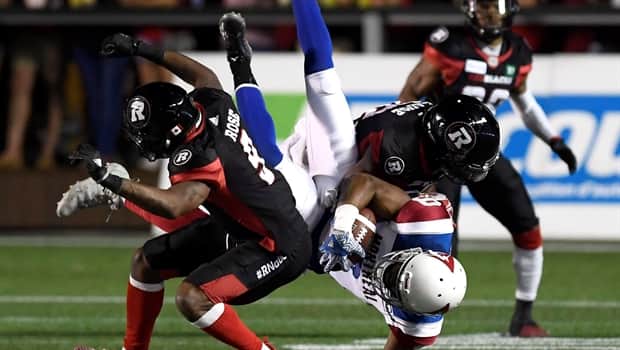 In an email to CBC Sports, the CFL said that "after speaking to the Montreal Alouettes' medical staff, Johnny Manziel did go through the concussion protocol and received the necessary treatment following the play in the third quarter."

However, the quarterback was not at Montreal's practices on Tuesday or Wednesday, fuelling more speculation that he suffered a concussion on the play and was still feeling the effects.

On Wednesday, the Alouettes released another statement: "On Tuesday morning, Johnny Manziel mentioned to our medical staff that he felt symptoms that could be associated with the prescribed medication he uses for a previously diagnosed medical condition. He then missed practice in order to have some blood work done. In view of the hit he received on Saturday and the potential mitigating side effects of his prescribed medication, the Alouettes medical staff has placed Manziel under the CFL concussion protocol for further observation and precautionary reasons. Manziel will be closely observed and assessed in the next few days."

The CFL has taken heat over the last few seasons for continuing to deny a link between football-related brain injuries and degenerative brain disease. The NFL has conceded such a link, but the CFL has not followed suit.

Former CFL commissioner Jeffrey Orridge was the first to deny it and current commissioner Randy Ambrosie has followed in his predecessor's footsteps.

"I can simply say this," Ambrosie said during Grey Cup week last November. "We're continuing to look at all of it but right now I think the answer is we don't know yet. There is not conclusive evidence. The science is still unclear."

Player safety has been a stated priority for Ambrosie since he took over in July 2017. The 2018 season is the first full campaign since the league banned padded practices, and each team now has an extra bye week. There is also a heavy emphasis on player discipline within the game itself, with the league saying it is handing out more fines and suspensions to players who use their own helmet to deliver a direct blow to the head of an opponent.

"The CFL and CFLPA continue to take part in world-class research to ensure protocols remain up to date as well educating players and creating a safer game by altering rules like banning of a blindside block or making it illegal to deliver a low block to the player outside the 'tackle box,'" the league said.

But while the CFL takes steps to make the game safer for its players, the league is facing a $200-million class-action lawsuit brought by former players over concussions and brain trauma.

Eric Macramalla is a partner at the law firm Gowling WLG and a professor of sports law at the University of Ottawa. He's been paying close attention to how leagues are changing their rules with the intent of diminishing the likelihood of injuries — especially brain injuries.

"The NFL is the only league to concede a link," he says. "That means the CFL has not acknowledged a link between repeated head shots [taken while playing football] and long-term brain damage."

In May 2016, Jeff Miller, then the NFL's senior vice president for health and safety, acknowledged a link between football-related brain trauma and the neurodegenerative disease known as chronic traumatic encephalopathy (CTE). Macramalla says one possible reason for the NFL admitting the link was to draw a line in the sand so that players from that point on could not say they were not aware that football may cause longterm damage to their brains.

"By extension, that would make a tough lawsuit all the more difficult since players consented or willingly played football knowing the risk," he says. "At law, if you know of the risk but still proceed, then it becomes very difficult to succeed in a lawsuit."

Macramalla says concussion litigation is not straightforward and poses a number of different challenges for athletes as plaintiffs.

"For example, the CFL collective bargaining agreement provides that issues of player health and safety go to arbitration and not to court," he says. "This argument was successful in the Arland Bruce case, where the case was dismissed as the court ruled it did not belong in court but rather should head to arbitration."

The Supreme Court of Canada ruled last May it wouldn't hear Bruce's concussion lawsuit against the CFL and former commissioner Mark Cohon, saying the Supreme Court previously ruled that unionized employees must use labour arbitration and not the courts to resolve disputes that arise under their collective agreement.

"The CFL is very pleased with the Supreme Court of Canada's decision," the league said in a statement. "We hope that this decision brings finality to any proceedings in the courts with respect to concussion litigation against the CFL."

Macramalla says the biggest challenge facing athletes today is that they need to establish causation.

"The players will need to show that their brain damage was the result of playing in the league," he explains. "So what caused the damage and when it was caused become critically important issues. Before playing in the CFL, players played in high school, college/university and elsewhere, like the NFL. They could have sustained brain damage before joining the CFL."

Watch a CBC Sports panel tackle the topic of concussions: 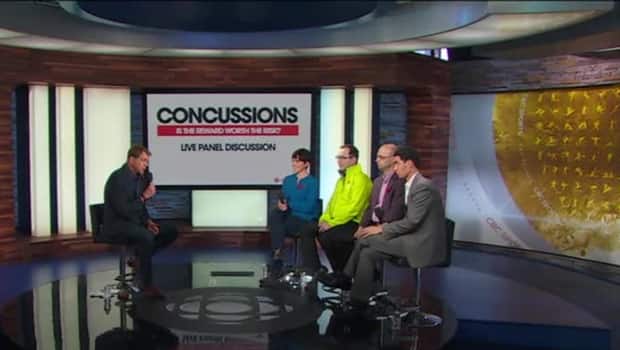 Concussions: Is the Reward Worth the Risk?

Macramalla adds that the CFL can also argue there wasn't conclusive science at the time and they had the same information the players had.

"Basically, they will say 'we knew what you knew.'"

Basically what this all means, according to Macramalla, is that players looking to sue the league face a tough legal battle. Along with having to successfully show causation, they may need to show compelling evidence that the league concealed the potential impact of repeated shots to the head.

"If they don't have that evidence," he says. "They will have a very difficult time."