Quarterback Mike Reilly passed for three touchdowns and took one in himself as the Edmonton Eskimos overcame a sloppy start to record a 41-22 victory over the B.C. Lions on Friday.

The Edmonton Eskimos recovered before it was too late on Friday.

Quarterback Mike Reilly passed for three touchdowns and took one in himself as Edmonton overcame an extremely sloppy start to record a 41-22 victory over the B.C. Lions.

Reilly completed 22-of-30 passes for 326 yards and the Eskimos turned a 14-2 second-quarter deficit into a 17-14 lead at the break that they never gave up.

"We dug ourselves a hole," said Eskimos head coach Jason Maas. "Our defence stood tall when it mattered most and it allowed us to get back into the game. 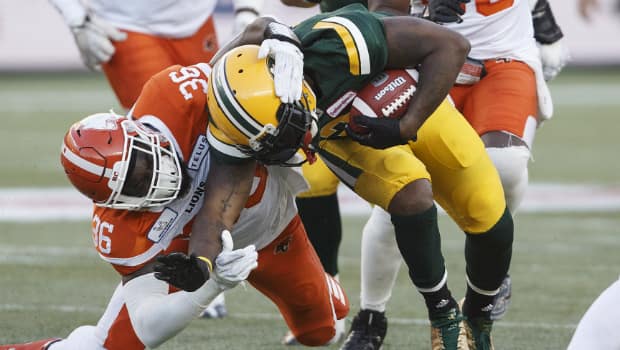 "Finally we got some momentum going and all three phases of the game started to click. When we do that, you can see the result."

"He had a phenomenal night," Maas said. "Guys were opening holes for him, but even when they weren't, he was still bouncing off people and making something happen."

Lions quarterback Jonathan Jennings said it was a tough loss to take.

"We just let it slip away, it was unfortunate," he said. "With a good team like Edmonton and a quarterback like they have, you have to keep them off the field and make more plays. We just didn't do that.

"Momentum is a big thing in this league. We had it a couple of times and lost it."

The Lions (1-1) started the game with a single on a 37-yard missed field-goal attempt by Tyler Long.

B.C. got the ball back when Reilly was picked off by T.J. Lee, eventually leading to a one-yard touchdown plunge by Jeremiah Johnson.

Edmonton continued to implode, fumbling the ball away to Dyshawn Davis on its own 23-yard line on the ensuing kick-off. Long kicked a 14-yard field goal to put the Lions up 11-0 midway through the first.

The Eskimos got on the board when B.C. conceded a safety.

Long started the second with 39-yard field goal, but then hit the uprights on his next attempt.

Edmonton finally got its offence going late in the second, when Reilly found Natey Adjei for a 14-yard TD. Then he hit Kenny Stafford for a 13-yard strike through the air with just 30 seconds left and added a two-point convert pass to Duke Williams to take a 17-14 lead into the half.

The Eskimos picked up where they left off in the third, with a three-yard TD run by Gable, although the convert kick failed.

Edmonton's momentum remained late in the third when Reilly completed a 64-yard pass-and-run into the end zone to Williams, who also caught another two-point convert.

The Lions finally ended Edmonton's run of 29 straight points with a one-yard TD by backup QB Cody Fajardo to start the fourth.

Edmonton bounced back with a one-yard rushing major of its own by Reilly.

Sean Whyte added a late field goal for the Eskimos.

Both teams are back in action again next Saturday, as the Lions head to Winnipeg and the Eskimos are in Toronto.