David Lee sacked Darian Durant to prevent a game-tying two-point convert with 14 seconds on the clock and John Chiles caught for a game-high 104 yards as the Toronto Argonauts beat the reeling Saskatchewan Roughriders 31-29 Saturday in a battle of CFL division leaders. 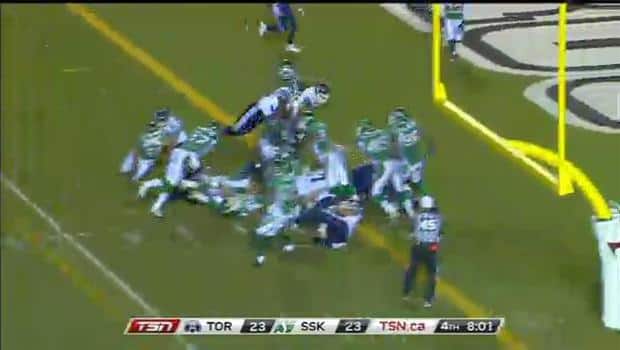 On Saturday he repaid them with a gift of his own, intercepting Saskatchewan Roughriders quarterback Darian Durant in the first quarter to set up a touchdown that gave the Argos an 8-0 lead en route to a 31-29 win.

Morley's pick was the first of three the Argos caught off of Durant, who still threw for 381 yards on 25-of-50 passing despite the turnovers.

"I was fired up," said Morley, who was cut Sept. 5 by the Calgary Stampeders and signed with Toronto the next day. "It's a business so I didn't take it to heart, but I know I'm a good player deep down and I know a lot of people know that I have it in me to be a good player so I just went out there and gave it my all."

It was an emotional rollercoaster and we just happened to make more mistakes than they did.- Roughriders fullback Neal Hughes

David Lee sacked Durant to prevent a game-tying two-point convert with 14 seconds on the clock and John Chiles caught for a game-high 104 yards as the Argos sent the reeling Roughriders (8-3) to their second straight loss while Toronto (7-4) won its second in a row to extend its lead atop the East Division.

Argonauts quarterback Zach Collaros finished 18-for-29 passing for 225 yards after accumulating only 56 yards in the first half.

"That's why you've got to let a young quarterback work through all the ups and downs of being a starter," said Toronto head coach Scott Milanovich. "And once again I was proud of the way he had enough mental toughness to stay in there and find a way to get us the win."

The game was a back-and-forth affair with Saskatchewan scoring 20 straight points to erase an 11-0 deficit and the Argonauts adding 19 straight of their own in the fourth quarter.

Chiles caught a 15-yard touchdown pass from Collaros as well as the two-point convert to tie the game at 23 after Swayze Waters broke the Argos' scoring drought with a 33-yard field goal to open the fourth quarter.

Toronto got the ball back immediately when Alonzo Lawrence caught Durant's third interception of the game.

Jerious Norwood capitalized on a two-yard touchdown run that put the Argonauts ahead for good.

Saskatchewan got the ball back with 53 seconds left and Durant hit Chris Getzlaf on back-to-back throws of 45-yards and an 18-yard TD to make it 31-29.

But Durant's protection broke down on the two-point attempt to give the Argos the win.

"It was an emotional rollercoaster and we just happened to make more mistakes than they did," said Roughriders fullback Neal Hughes, who had 72 yards receiving and 14 yards rushing in relief of Kory Sheets, who left the game in the first quarter with a right-knee injury. "At the end of the game all the penalties add up and the turnovers and you can't win football games like that."

After a week in which Saskatchewan lost to the Winnipeg Blue Bombers, lost middle linebacker Rey Williams to a season-ending knee injury and had three players charged with aggravated assault, the Roughriders opened Saturday very much like a team on the ropes.

Morley's pick set up a one-yard touchdown run by Collaros, who made his third straight start in place of the injured Ricky Ray.

Later in the quarter the Argos fumbled on a punt return, giving Saskatchewan the ball at Toronto's 22-yard line. But a 15-yard unnecessary roughness penalty to Dominic Picard forced the Riders into second-and-long, and Cory Huclack's snap on the ensuing punt went over punter Ricky Schmitt's head.

That gave the Argonauts the ball at Saskatchewan's 34-yard line and set up a 48-yard field goal from Waters, who also opened the scoring on a punt single.

Still in the first, Sheets, the league's leading rusher, left the game after getting rocked by Toronto's Jonathan Williams.

Chris Milo got the Riders on the board before the end of the quarter with a 33-yard field goal, tying Dave Ridgway's club record with his 28th straight.

But Saskatchewan's woes continued in the second quarter when they couldn't capitalize after Weldon Brown intercepted Collaros near midfield.

"When I look at football you definitely want to win them all there's no doubt about that," said Roughriders head coach Corey Chamblin. "But like I said, we're still in the correction phase and we've got to find a way to get out of that.

"It's still correcting itself. When you start off 5-0 with no losses and not learning some lessons early, we're learning those lessons now."

The Roughriders' turnaround came after defensive end Ricky Foley's fourth sack of the season and the team's third of the game.

Durant hit Chris Getzlaf with a 31-yard touchdown pass and the Riders got the ball right back when Prince Miller recovered a Jason Barnes fumble deep in Toronto territory.

Milo made amends for his earlier gaffe with a 19-yard field goal to give Saskatchewan its first lead of the game, 13-10.

The Argonauts fumbled on their next possession as well when Riders safety Tyron Brackenridge hit Chad Kackert near midfield.

Durant extended the lead a few plays later with a 47-yard TD strike to Rob Bagg.

Milo added a nine-yard field goal to give the Riders a 23-12 lead going into the fourth quarter.

Notes: Attendance for the game was 36,703. ... In addition to Williams and Sheets, the Riders also played the game without all-star slotback Weston Dressler who was given the game off to rest some nagging injuries. ... Two of the three Riders charged last week — defensive back Dwight Anderson and wide receiver Taj Smith — were in the starting lineup for Saskatchewan. The third, receiver Eron Riley, was not on the 46-man roster.