Canada's Minister of Science and Sport Kirsty Duncan and the Coaching Association of Canada announced two initiatives on Thursday in Ottawa to address abuse and harassment in sport.

Minister of Science and Sport Kirsty Duncan and the Coaching Association of Canada announced two initiatives on Thursday in Ottawa to address abuse and harassment in sport.

Calls for action followed an investigation by CBC News and Sports that revealed at least 222 coaches involved in amateur sports over 20 years have been convicted of sex offences involving over 600 victims under age 18.

Duncan reiterated Thursday that the CBC News and Sports investigation "broke her heart."

In March, a series of regional workshops will be held across Canada that will include:

​A national Safe Summit in Ottawa will be held in the spring. 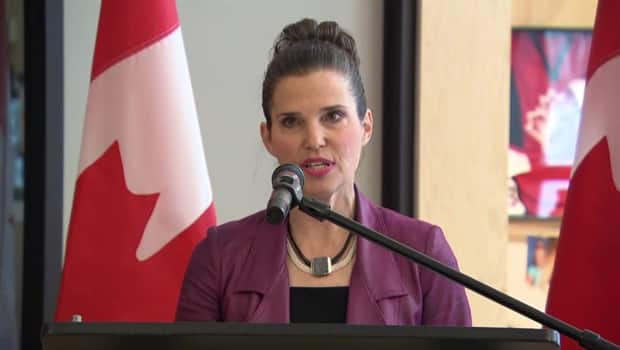 2 years ago
2:57
Minister of Science and Sport Kirsty Duncan announced funding for a Safe Sport Summit Series aimed at helping develop a national code of conduct, and the creation of a Gender Equity Secretariat with the goal of achieving gender equity in sport by 2035. 2:57

"Since being appointed minister of sport a year ago, I've worked hard to put athletes and children at the centre of everything we do from the playground to the podium," Duncan said. "This includes first and foremost keeping them safe from abuse, discrimination and harassment. Nothing is more important to me. No athlete or child should ever experience abuse and my heart breaks for those that have suffered."

The hope is that a greater participation of women in leadership roles, coaching and officiating would contribute to greater safety in sport.

"We need everybody on board for this," Duncan said. "This is the next important step and it's working with [Coaching Association of Canada chief executive officer Lorraine Lafreniere], who has the mandate to work with sport across the country at all levels."

The CAC said "this is huge and monumental" and initial reaction from the various governing sport bodies and its coaches has been positive.

"This is the opportunity to hear from them, get into what a code might look like, see what the issues are for capacity for some of our smaller jurisdictions ... and find those solutions so parents and participants understand there's one code that people are held accountable to — coaches, officials and administrators," Lafreniere said. "We're starting and we hope to succeed."

The government said in a release that the code of conduct will serve as a model that can be used in all sports at all levels, from national sports organizations to community teams. This code will serve as a basis for the management of abuse, discrimination and harassment cases and as a model for consistent sanctioning for those who breach the code.

Lafreniere said the code's success will be dependent on its implementation by the individuals involved, including participants.

"Parents need to not ask just what equipment to buy, but ask what their safe sport policy is, what's the rule of two, which is the biggest deterrent so that no one adult is left alone with one child, what are your training, what are your screening policies," said Lafreniere. "Parents are part of the solution, in fact they are the solution because the more they ask for it the more we will do it."

Lafreniere acknowledged change won't take place overnight, but there has been success with various governing bodies of sport working together towards a common goal.

"Concussion is a great example of how all governments came together to create change and we see that model in this as well," Lafreniere said.

Lafreniere said the focus needs to be placed on "the most threatening, high risk and egregious behaviours to take that protection as the first step, along with the future steps of maltreatment and other changes that are needed to keep our young participants safe and striving."

The CBC News and Sports investigation involved searching through thousands of court records and media articles, and visiting courthouses across Canada. What emerged, for the first time, was a detailed database of sexual offences committed by amateur athletic coaches.

The charges include offences such as sexual assault, sexual exploitation, child luring, and making or possessing child pornography. Most but not all the victims were athletes training with a coach; in all cases, the accused was charged between 1998 and 2018, but the offences may have occurred earlier.

Beginning in 2020, sport organizations that receive federal funding must have a policy to address abuse and provide mandatory training to their members.

They must also report incidents of abuse directly to the minister and will be required to make an independent third party available to hear athlete-abuse allegations — something athletes from a number of national teams have been pushing to get put in place.

Experts say these ideas will help athletes competing at a national level, but question what they will do for the hundreds of thousands of Canadian athletes who aren't at the elite level.