The credo of next-man-up has the Dallas Stars one game up in the 2020 Stanley Cup final.

Joel Hanley and Joel Kiviranta scored and goalie Anton Khudobin made 35 saves as the Stars beat the Tampa Bay Lightning 4-1 Saturday in the opening game of the NHL Stanley Cup final, at Rogers Place.

Hanley, Kiviranta, and Khudobin have all stepped up due to injuries to other players as part of the next-man-up whatever-it-takes mantra of playoff hockey, putting the Stars three games away from their first Stanley Cup in 20 years.

Hanley, an undrafted free-agent signee from Keswick, Ont., scored his first ever NHL goal while playing in his seventh consecutive playoff game, replacing an injured Taylor Fedun in the lineup after Fedun replaced an injured Stephen Johns.

"It's something you dream about when you're young," said Hanley.

"Just cool to be able to contribute with a goal like that (and) pretty cool to be in the finals, too."

WATCH | Oleksiak buries his own rebound: 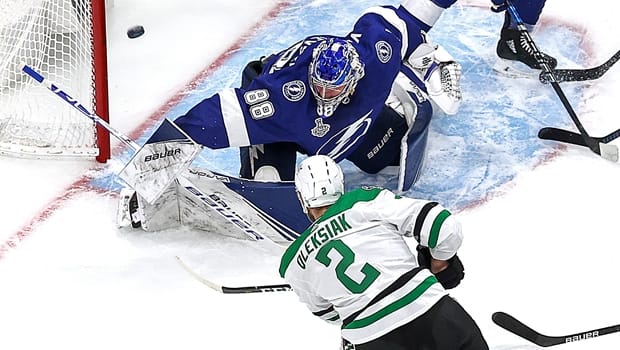 1 month ago
1:02
Jamie Oleksiak's tally in the opening game of the Stanley Cup Final was enough for Dallas in their 4-1 victory over Tampa. 1:02

Tampa defenceman Zach Bogosian flew over to hit Kiviranta in retaliation, allowing Star forward Roope Hintz to gobble up the loose puck, swoop around untouched behind the net and feed Hanley in front for a shot blocker-side high past Vasilevskiy.

"I saw Roope go behind the net and then I saw an opening in the middle. So when Roope passed it, I don't know if I lifted my head up or not, I don't know what it looks like on camera, but I just tried to pick a corner and shoot as hard as I could and it was lucky enough to go in," said Hanley.

Tampa Bay then got a break on a bounce to tie the game before the period was out. Blake Coleman blasted a low slapshot from the point that Khudobin deflected with his pad right to Yanni Gourde's skate, then to Hintz's skate and into the back of the net.

Gourde got credit for the goal, his sixth of the post-season.

Dallas grabbed the lead back with less than eight minutes to go in the second period. Oleksiak took an Alexander Radulov pass, walked in untouched in the slot and fired a wrist shot. Tampa goalie Andrei Vasilevskiy stopped it, but Oleksiak got his own rebound and zipped it under the crossbar and in.

Then Kiviranta, in the dying seconds of the second frame, got a similar bounce. Racing in at high speed his first shot was blocked by Mikhail Sergachev, but the puck caromed right back to Kiviranta, who shot again for his fifth goal of the post-season.

Kiviranta joined the lineup for an injured Andrew Cogliano in Game 7 of round 2, scoring a hat trick, including the overtime winner, to knock out the Colorado Avalanche out of the playoffs.

He then scored a late goal in the final game against Vegas to tie the score, allowing Dallas to go on and win in overtime and bounce the Golden Knights out of the bubble.

The 24-year-old Finn was signed as an undrafted free agent by Dallas in the spring of 2019 and was playing Saturday in just his 20th NHL game. 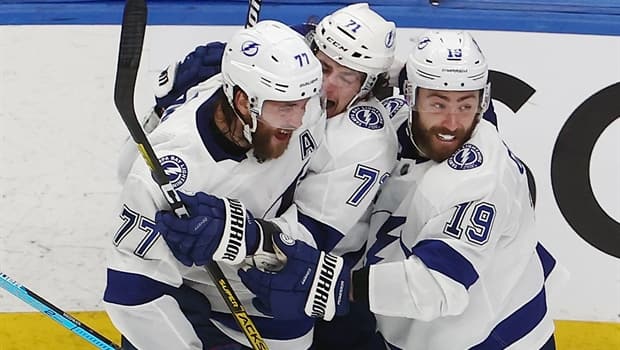 1 month ago
3:40
In his daily recap, Rob Pizzo break down an event-filled Game 6 in the East, and previews the Dallas-Tampa Cup final. 3:40

Tampa Bay put the Stars on their heels in the third period, dominating play in the Dallas end of the rink, but Khudobin turned aside 22 shots in the final 20 minutes to preserve the win.

Jason Dickinson added an empty-netter with just over a minute to go for the final goal of the game.

It was Khudobin's 13th win of the post-season, writing another chapter in the storybook by this journeyman backup goalie from Kazakhstan who got his chance to start in this post-season after Dallas starter Ben Bishop was injured.

"He's been a rock for us all playoffs. It was no different tonight," said Dallas forward Blake Comeau of Khudobin.

"Every time we've need a big save at timely points in the game, he's been there for us."

Dallas had not played since finishing off the Vegas Golden Knights Monday night, while Tampa Bay wrapped up its series with the New York Islanders Thursday. The last two games of that series went into overtime.

The Lightning are now 0-3 in Stanley Cup final opening games.

"The Islanders they kind of sat back. Dallas was in our face on the blue-lines," said Johnson.

"I think in the first two periods we we're kind of forcing a little bit too much, trying to make those entry passes where I think our recipe is getting (the puck) deep and working.

"We just gotta keep doing that, grinding and playing our game."

This is the final round of the so-called bubble playoffs. All post-season games have been played in front of no fans in Edmonton and Toronto, with players isolating between games to prevent contracting the coronavirus.

For the first period Saturday the players squared off literally in the shadow of the Stanley Cup. As there are no fans, the silver mug was placed on a draped stand on a platform erected above the players' benches. Stanley had the best seat in the house.

Both franchises are seeking their second Cup. Dallas won in 1999 and Tampa Bay in 2004.

The Bolts are the first of the 10 NHL franchises that began play in the 1990s or later to reach the final three times. The Lightning lost to the Chicago Blackhawks in 2015.

This was not the first time the cup final has been contested at a neutral site.

The league reports it has happened nine times in its history, the last time prior to Saturday being games 2 and 3 between the Detroit Red Wings and New York Rangers. The games were played in Toronto because the circus was booked in for those dates at New York's Madison Square Garden.