Erica Wiebe has come — and gone — a long way in the last four years, but the Canadian wrestling star was happy to return to the Commonwealth Games to defend her title and take another step towards repeating as Olympic champion.

"My goal was to pet a koala, get a tan and get a gold medal."

Wiebe completed the third on the mat Thursday at the Carrara Sports and Leisure Centre — with authority.

The Stittsville, Ont., native began her Commonwealth title defence in the women's 76-kilogram category with a speedy victory, pinning Hajaratu Kamara of Sierra Leone a little more than a minute into their quarter-final match.

Next up was a semifinal against England's Georgina Nelthorpe, who the Canadian handled in a time not much longer than her first match, via technical superiority, by a score of 11-0.

The final saw Wiebe give up her first and only points of the tourney before she pinned Blessing Onyebuchi of Nigeria to claim gold and repeat as Commonwealth champion. 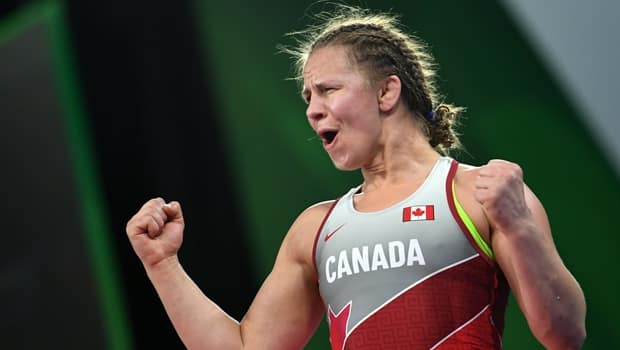 The last time she won this title, in 2014 in Glasgow, Wiebe spun it into Olympic gold two years later. That's the aim once again for Wiebe, who says she takes a lot of confidence from her Commonwealth Games victories.

"In 2014 when I came here it was really my first big multi-sport Games, my first big event — bright lights in a big stadium," she says. "Competing on a big major stage like that gave me the confidence and experience that when it came time for the finals in Rio, I knew what to expect, I knew what I was capable of and had confidence in myself." 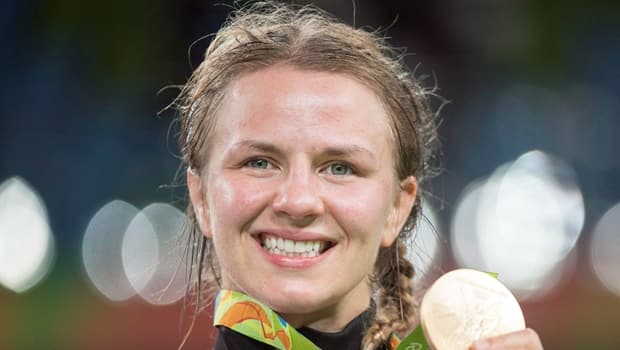 3 years ago
3:28
The Olympic champion wrestler is competing for Canada in Gold Coast, Australia. 3:28

To say it's been a busy few years for Wiebe would be an understatement of global proportions.

After winning Olympic gold in Rio in 2016, the Canadian has been on a whirlwind tour, the latest stop of which has her in Australia to defend her Commonwealth Games title.

So, in a way, the 28-year-old is back where her wild ride began.

"It's so crazy being back here four years later," she says. "Everything has changed, but in some ways it's still a wrestling match and anything can happen. I still love this sport, I'm still growing and learning so much. I just hope to be there for the ride and be there in Tokyo."

Wiebe's road to Rio went through Glasgow, but she got to the Gold Coast via... well, let's just say her passport is full of stamps.

"I always have a lot going on in my life, she says. "I've always loved having balance with my personal goals, academic goals and having sport goals. After Rio, it got super crazy.

"I love adventures, so I went on quite the adventure."

Her Olympic success landed her a huge gig in the India's Pro Wrestling League, where she was team captain of the Mumbai Maharathi. Wiebe's participation fee was 4.3 million Indian rupees, which equates to more than $80,000 Canadian, making her one of the highest-paid wrestlers out of many world-class women and men.

Wrestling-related adventures have also had Wiebe globe-hopping to Sweden, Ukraine, Iceland and across Canada. She also received an invite from WWE.

The sports-entertainment behemoth offered Wiebe a chance to visit and watch the Mae Young Classic finale in Las Vegas, with a follow up-stop at the WWE's Performance Center in Orlando, Fla.

Becoming an Olympic champion also means increased demands on her time. However, if her results here in the Gold Coast are any indication, she's well equipped to deal with the growing attention and has found her balance.

"I took a look at what I wanted to accomplish in Tokyo in 2020, so I'm really focused on what I want my schedule to look like," Wiebe says. "I'm actually working in a flexible work role at Deloitte in Calgary, so that's keeping me focused and grounded. It gives me so much balance outside of the wrestling world [and] the padded wrestling room that we train in every single day.

"I'm really intentional about what I do every day."

Helping to keep her on track is coach Paul Ragusa, himself a silver medallist in wrestling at the 1994 Commonwealth Games. He says Wiebe's work ethic is second to none, and it's helped her cope with being a hot commodity.

"She's a Commonwealth Games champion and an Olympic champion. There's a lot of expectations on her," he says. "She always feels a lot of pressure but she's managing it well.

"She's a great champion and a great role model. She's someone you can really get behind because she works so hard."

The relationship with her coach is a special, and emotional, one for Wiebe.

"In [Glasgow] we won that gold medal together and he started really focusing on me and being that mentor for me. He pushes me and challenges me. He's the best technical coach in the world and I know that he supports me, no matter what," Wiebe says, tears running down her cheek.

Now that she's taken care of her three goals here in Australia, Wiebe will stick around to cheer on her teammates who are looking to check off their own podium finishes. Her gold was one of four medals won by Canadians on the night, with Diana Weickel, Steven Takahashi and Jevon Balfour also hitting the podium.

"I love the Wrestling Canada team. I think we're going to have a really strong performance," Wiebe says. "Tonight was just the beginning."