Teenage swimmer Taylor Ruck won Canada's first gold medal of the 2018 Commonwealth Games on Thursday in Australia, setting a new Games record in the women's 200-metre freestyle, before adding a silver in a relay event.

Teenage swimmer Taylor Ruck won Canada's first gold medal of the 2018 Commonwealth Games on Thursday in Australia, setting a new Games record in the women's 200-metre freestyle, before adding a silver in a relay event. 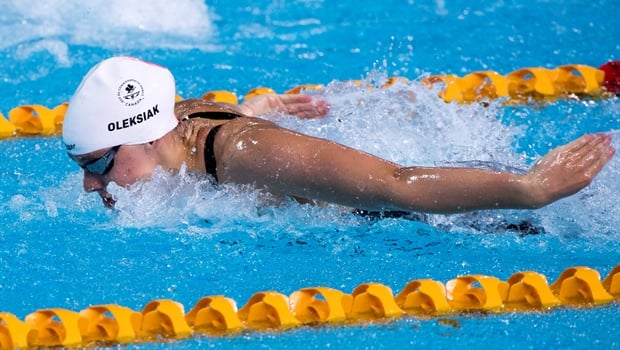 2 years ago
1:36
Taylor Ruck and Penny Oleksiak helped Canada to a total of 3 medals in the pool on opening day of the 2018 Commonwealth Games on the Gold Coast in Australia. 1:36

"In the last 25 metres I took two breaths," Ruck said. "I thought I just had to keep my head down and try not to breathe because I thought I saw Ariarne coming up really fast and I was thinking, just go as fast as I can." 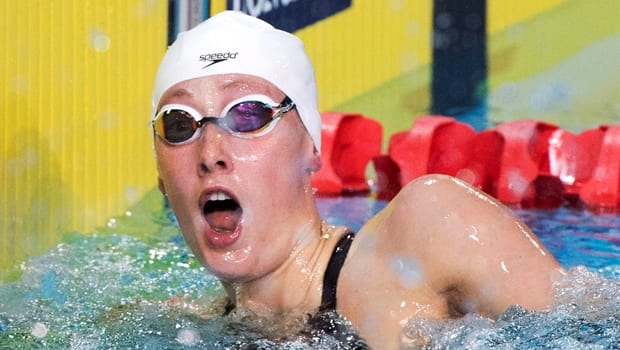 Canada's Penny Oleksiak finished seventh in 1:59.55. Oleksiak, who's also 17, revealed on Wednesday that her grandmother died before the start of the Commonwealth Games.

"[The Commonwealth Games are] just kind of a viewpoint of where I am right now going into the next Olympics," said Oleksiak, who stunned the swimming world by winning gold in the 100 freestyle and finishing with four medals at the 2016 Rio Games. "I'm not expecting to be my next Olympic level right now. [I'll] just see where I am, see what I can fix, and then build from there."

A short time after the 200 final, Ruck and Oleksiak led Canada's women's 4x100 freestyle relay team to a silver medal. With Ruck swimming the anchor leg, Canada clocked in a 3:33.92, comfortably ahead of England but well behind the Australian team that set a new world record of 3:30.05. 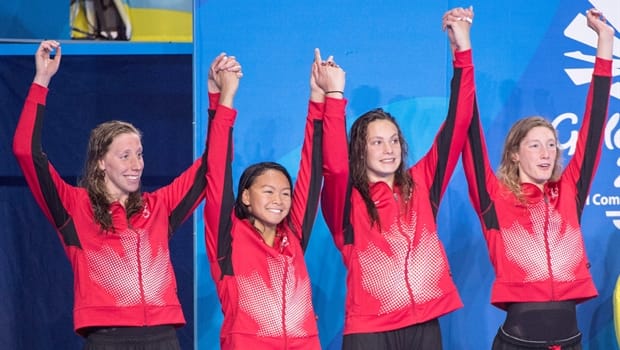 2 years ago
1:16
Canada earned a silver medal in the women's 4x100 metre relay event, finishing behind host country Australia at the 2018 Commonwealth Games. 1:16

Ruck and OIeksiak were both on the Canadian team that won bronze in this event in Rio. Alexia Zevnik and Kayla Sanchez, who were not on that Olympic team, were the other members of the squad on Thursday.

''It was a special race because I got to share it with my best friends," Ruck said.

Para swimmer Sarah Mehain rounded out a three-medal day for Canada in the pool by taking bronze in the women's 50-metre butterfly in the S7 disability category.

''It was a really solid race for me,'' said Mehain. ''I've made some adjustments to my stroke and it seems to be working out really good.''

Earlier Thursday in Australia, Joanna Brown won Canada's first medal of the Games by taking bronze in the women's triathlon.

Canada is aiming for 100 medals at the Games, which are being hosted by the city of Gold Coast and include events for both able-bodied and para athletes.

Here's a breakdown of Canada's podium finishes on Thursday, the first day of competition:

Ruck on the rise

Ruck, who has verbally committed to attend Stanford University, has been serving notice recently that she is something very special.

She had set the Canadian record of 1:56.85 in the 200 freestyle in March in Atlanta with a sizzling swim in the final TYR Pro Swim Series stop in her final tune-up before the games. Ruck won three other events at the Atlanta meet including the 100 free where she beat world record-holder Sarah Sjostrom.

Ruck, who was born in Kelowna but moved to Scottsdale, Ariz., with her family when she was young, switched things up last year after failing in April to qualify for the world championships. She moved to Toronto in May to train with coach Ben Titley at the High Performance Centre-Ontario.

At the Swim England National Winter Championships in December, she tied the 200 freestyle Canadian record and trimmed her 100 free and 200 backstroke times, setting a Canadian national age group record (15-17) in the 200.

Ruck came to the Commonwealth Games with four times in the top eight in the world (in the 100 and 200 backstroke and 100 and 200 freestyle).

Atkinson calls it a "breakout meet" for Ruck, a six-footer with an equally big smile. Unlike Rio where she competed only in the relays, she has three more individual events here plus relays.

"The work that she's been doing in a lot of these swim meets over the last year is preparing her to come here, be busy, work on recovery strategies between heats, finals, semifinals," said Atkinson. "And we want her to be swimming just as fast on Day 6 as she is on Day 1."