Tears flowed from Lysanne Richard as the Canadian national anthem was played in her honor on Sunday after she collected her third career victory on the Red Bull Cliff Diving World Series circuit.

It was the Montreal native's first victory in her comeback season. Last year, the 36-year-old mother of three missed the entire season due to a neck injury. She ranked second overall on the circuit in 2016. 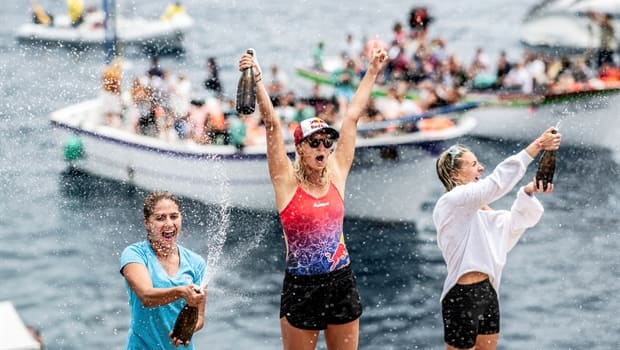 2 years agoVideo
0:49
The 36-year-old mother of three from Montreal missed all of last season due to a neck injury, but returned to win Red Bull Cliff Diving World Series gold in Sisikon, Switzerland on Saturday. 0:49

"It was so emotional to win here today," said Richard. "I couldn't stop crying. I'm really emotional because of everyone who helped me come back. Just being back was already a big win, not even winning. I was lucky today, had a good competition and I'm really grateful for all the help that I got and all the love I receive."

Richard placed first with 313.45 points followed by Rhiannan Iffland of Australia in second at 307.35 and Jessica Macaulay of Britain at 297.00.

Richard was the second to last diver in the fourth and final round. She launched herself from the 21-metre high board and executed a flawless front dive with three somersaults and one and half twists.

Richard was awarded two 8.5's, two 8.0's and a 7.5 to take the lead. Iffland followed with a more difficult backward dive with three somersaults and two twists but averaged 6.0's and could not catch the Canadian.