A mix of amateur and professional athletes headline this year's class of nine inductees to Canada's Sports Hall of Fame, announced Wednesday morning in Toronto.

"You never dream of ever being honoured or asked to go into Canada's Sports Hall of Fame," said McDonald. "I thought it was one of the guys pranking me when this came about but all of a sudden today happens and you realize, 'Oh my gosh.'

"It's so cool. I'm so honoured and thrilled. What a great class to go in with."

"It's very very special," added Carol Huynh, the first Canadian to win Olympic gold in women's wrestling in Beijing in 2008. "I don't think I'm finished yet but for sure, this is a huge honour and an achievement I'm super surprised about and happy to accept."

Also named were the Edmonton Grads women's basketball team, while Dr. Robert W. Jackson and Dr. Charles Tator will be inducted in the builders' category on Nov. 9 in Toronto.

Induction into Canada's Sports Hall of Fame is considered one of the country's highest sporting honours.

Founded in 1955, the new Canada's Sports Hall of Fame building opened July 1, 2011. The 40,000-square-foot facility, open to visitors, is on the west side of Canada Olympic Park in Calgary.

Best known for his giant, walrus-style moustache, McDonald also became an iconic figure in the NHL. He capped a 47-goal season in 1978 with the Game 7 overtime winner to help the Toronto Maple Leafs beat the New York Islanders and advance to the semifinals. Ranking 13th all time in franchise history in points, he was traded to Colorado two seasons later and went on to score 500 goals and 1,006 points in a Hall of Fame career that ended in a Stanley Cup title with Calgary in 1989. 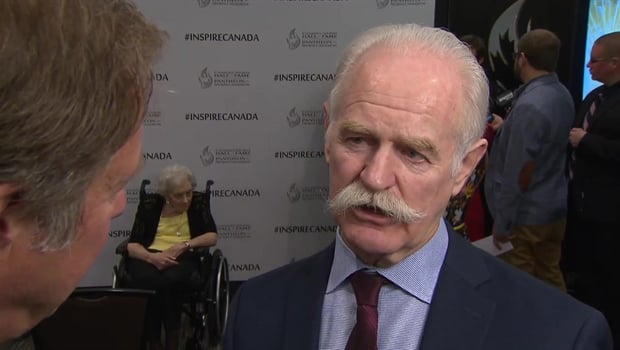 4 years ago
2:14
The former NHLer spoke with CBC Sports' Scott Russell after it was announced that he would be inducted into Canada's Sports Hall of Fame. 2:14

A speed skating legend, she became the only Canadian athlete to win five medals in a single Olympics, winning one gold, two silver and two bronze in 2006 in Turin, Italy. Klassen, who later received the Lou Marsh Award as Canadian athlete of the year, first came to world prominence in 2002 when she won Olympic bronze in the 3,000 metres at the Salt Lake City Games. She retired in 2015 at age 35.

Weir became a national hero in 2003 with his improbable and magical Masters victory, the first-ever win by a Canadian man at a major golf tournament. Weir topped the field two more times that season and again in 2004 and 2007 to give him eight wins overall. While he hasn't won since, the 46-year-old from Brights Grove, Ont., has pocketed nearly $28 million US in career earnings and was the first Canadian to play in the Presidents Cup.

One of the most successful athletes in triathlon history, Whitfield won a gold medal at the 2000 Sydney Olympics and added a silver eight years later in Beijing. In his 16 years racing for Canada, the native of Kingston, Ont., also won gold at the 2002 Commonwealth Games and recorded 14 World Cup victories and eight top-10 finishes at the world championships. A ferocious competitor, Whitfield retired in 2014 at age 38.

"To be recognized as an Olympian and Canadian [Sports] Hall of Fame member and to know the legacy of the great Canadian athletes that have come before and will come in the future, I'm proud to be part of that legacy," said Whitfield. 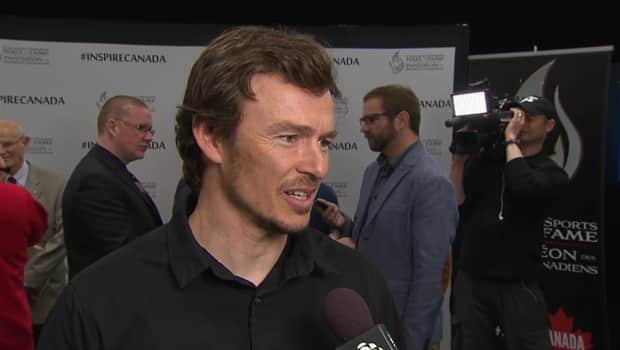 Simon Whitfield: 'I was able to express myself through sport'

4 years ago
2:46
The Olympic triathlete spoke with CBC Sports' Scott Russell after it was announced that he would be inducted into Canada's Sports Hall of Fame. 2:46

The Hazelton, B.C., wrestler became the first Canadian woman in her sport to earn an Olympic title in 2008 at Beijing and added a bronze in 2012 in London. Huynh was an 11-time Canadian champion, two-time Pan American champion, Commonwealth champion and four-time medallist at the world championships. Last summer, she served as Canada's assistant chef de mission for the 2016 Rio Olympics. 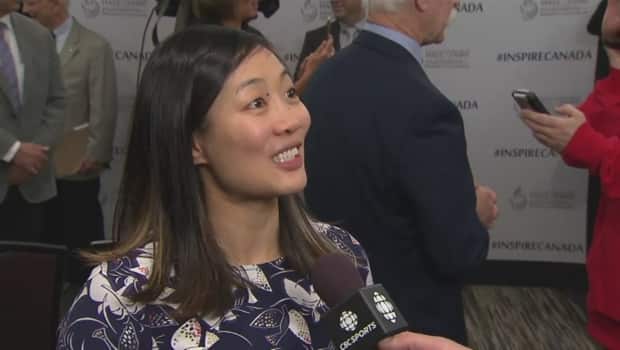 Carol Huynh: 'You can come to this country and have a dream'

4 years ago
2:28
The Olympic wrestler spoke with CBC Sports' Scott Russell after it was announced that she would be inducted into Canada's Sports Hall of Fame. 2:28

The "Marvellous Mohawk" from Ohsweken, Ont., was a star in both the junior and professional levels of lacrosse. Powless led the Oshawa Green Gaels to four Minto Cup championships from 1964 to 1967 and twice was selected most valuable player.

Named the top Native athlete in Canada at age 17, Powless and his father Ross are members of the Canadian Lacrosse Hall of Fame and the only father-son tandem to be inducted in the players' category. Gaylord Powless died from cancer on July 28, 2001 at age 54.

Long before the Edmonton Oilers dynasty years in the 1980s, the Grads women's basketball team dominated the competition. A remarkable 25-year run that began in 1915 saw the team become Canadian, North American and world champions while changing the attitude of those who viewed women competing in sports as unhealthy. The Grads won 16 straight world titles and posted a 502-20 record, once beating a French squad 109-20, before disbanding in 1940 because of travel restrictions resulting from World War II.

A talented surgeon, Dr. Jackson was credited with bringing the practice of arthroscopy to North America from Japan. The Toronto native was also a founding member of the Canadian Paralympic movement in 1967, helping Canada make its debut at the 1968 Paralympic Games in Tel Aviv. In 1976, Dr. Jackson organized the Olympiad for the physically challenged that ran parallel to the Montreal Olympics. He died on Jan. 6, 2010 at age 78.

Dr. Tator, 80, is a world renowned expert on sports concussions and spinal cord injury, prevention and treatment research. The Toronto-based neurosurgeon is an advocate for stronger regulations around head shots in hockey and his laboratory was the first in Canada to study acute spinal cord injury. Dr. Tator founded ThinkFirstCanada in 1992, an organization that educates youngsters about safety, and helped develop the Canadian Brain and Nerve Health Coalition in 2002. Two years earlier, he was appointed a Member of the Order of Canada.