With Zion injured after shoe blows out, No. 8 UNC beats No. 1 Duke

Luke Maye took full advantage of a freak injury to freshman sensation Zion Williamson, finishing with 30 points and 15 rebounds to lead No. 8 North Carolina past No. 1 Duke 88-72 on Wednesday night.

Zion Williamson blew out his shoe, and then No. 8 North Carolina blew out top-ranked Duke.

Luke Maye took full advantage of a freak injury to the freshman sensation, finishing with 30 points and 15 rebounds to help the Tar Heels rout Duke 88-72 on Wednesday night.

"Obviously, you lose a national player of the year candidate," coach Mike Krzyzewski said, "there are going to be gaps of what you have to do."

"It was just a shock for us," Duke forward Cameron Reddish said. "Obviously, we're used to playing with him, so playing without him was very difficult. We missed him today."

Williamson grabbed the knee in pain after slipping awkwardly and falling when his left Nike shoe fell apart as he planted hard while dribbling near the free throw line. The blue rubber sole ripped loose from the white shoe from the heel to the toes along the outside edge, with Williamson's foot coming all the way through the large gap.

Coach Mike Krzyzewski classified the injury as a mild sprain, but didn't know how much time Williamson will miss.

RJ Barrett matched a season best with 33 points and fellow freshman Reddish added a season-high 27 for Duke — but the rest of the team combined to score just 12. 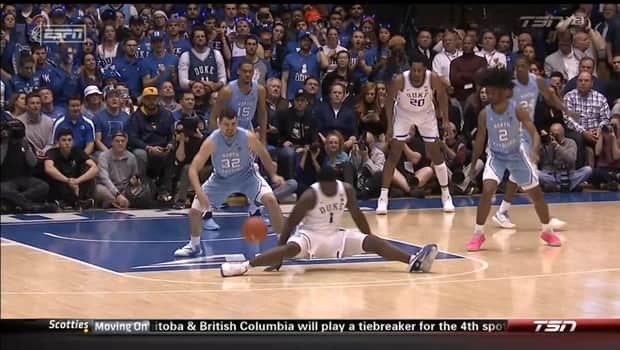 Game Wrap: Zion Williamson blows a Nike, Duke gets blown out by UNC

Duke looked lost without Williamson. Meanwhile, North Carolina took advantage of the Zion-sized hole in the lane, scoring 32 of its first 34 points in the paint and finishing with a 62-28 scoring advantage there. The Tar Heels never trailed, pushed their lead to 22 on Johnson's layup with about 16 minutes left and held on.

"First, I'm thinking if he's OK, man," Maye said. "I don't want to see somebody get hurt, especially a guy of that caliber, and I hope he makes a quick recovery. But when he goes down, I'm obviously trying to attack — and I was going to do that anyway. I was going to try to get inside and work inside out and just play my game and play the way I know I can play."

Eight nights after the Blue Devils rallied from 23 down in the final 10 minutes to win at Louisville, they couldn't come up with another comeback — especially without Williamson.

"You go in with your game plan, get into the game, and then 36 seconds in, one of your key guys goes out," Barrett said. "It was tough for us to bounce back from that, and North Carolina really punched us the whole way through."