Damiris Dantas totaled a career-playoff-high 22 points and eight rebounds, and the fourth-seeded Minnesota Lynx staged a second-half rally to edge the fifth-seeded Phoenix Mercury 80-79 Thursday in the single-elimination second round of the WNBA playoffs in Bradenton, Fla.

7th-seeded Sun crush Sparks to set up showdown against No. 1 Las Vegas

Rookie of the year Crystal Dangerfield scored 15 of her 17 points in the second half and Minnesota beat Phoenix 80-79 on Thursday night to advance to the semifinals of the WNBA playoffs.

Damiris Dantas led Minnesota with 22 points although she missed a pair of free throws with 6.1 seconds left giving Phoenix the chance to pull off another last-second post-season victory. With no timeouts left, the Mercury got the ball up the court bur Skylar Diggins-Smith's shot was off the mark at the buzzer.

Two nights earlier, Shey Peddy made a buzzer-beating 3-pointer in an 85-84 win over Washington in a first-round victory.

The loss was the first in eight career single-elimination playoff games for Diana Taurasi, She had 28 points and nine assists to lead the Mercury. 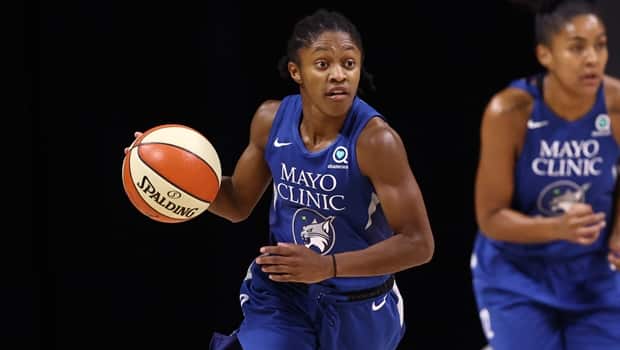 1 month ago
0:43
The Minnesota Lynx held on to a one possession lead late in their single game elimination contest against the Phoenix Mercury to win 80-79. 0:43

Fourth-seeded Minnesota had been eliminated in the first round of the playoffs the previous two seasons.

"When you think about the odds of beating a Diana Taurasi team in single elimination games — you can tell me what her record is — we knew we had our work cut out for us," said Minnesota coach Cheryl Reeve, who earned the league's coach of the year honours earlier in the day. "A lot of effort went into guarding her and she still had 28 points and nine assists. A lot of things need to go your way."

Dangerfield was a big reason why that streak ended. She scored seven points in a 10-3 run to give Minnesota the lead for good, 74-67. Taurasi converted consecutive four-point plays to get the Mercury within one before Odyssey Sims' basket made it 80-77 with 2:31 to go.

Sims finished with 14 points and Rachel Banham 11 for fourth-seeded Minnesota, which will play No. 2 Seattle in a best-of-5 semifinal series that begins Sunday.

Canada's Bridget Carleton was moved to the bench due to Fowles' return, but still played 26 minutes and closed the game for Minnesota guarding Taurasi on defence. The Chatham, Ont., native scored just three points, but notched a team-high plus-15.

The Lynx made up a nine-point halftime deficit to head into the final period tied at 60-all.

Brianna Turner added 13 points and 14 rebounds and Kia Vaughn 10 points for the fifth-seeded Mercury, who have been hampered by injuries and Brittney Griner leaving the bubble for personal reasons for most of the second half of the season..

"It's sport isn't it. It's great when you win and terrible when you lose," Mercury coach Sandy Brondello said. "It's disappointing, rather be looking forward to that next round in the semifinals. I'll be sad in a few days and plan for the future. We got a lot of great pieces and keep adding to it. Put ourselves in a better position to win a championship next year."

WATCH | Peddy's buzzer-beater lifts Mercury over Mystics in 1st round: 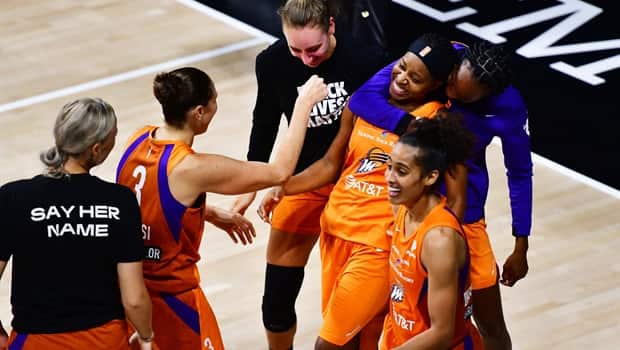 1 month ago
1:11
After being cut by the Mystics earlier in the season, Shey Peddy got her revenge as this game-winning triple sent Washington packing from the WNBA playoffs. 1:11

The Sun, who swept the Sparks in the semifinals last year, take on top-seeded Las Vegas in a best-of-5 semis beginning Sunday. 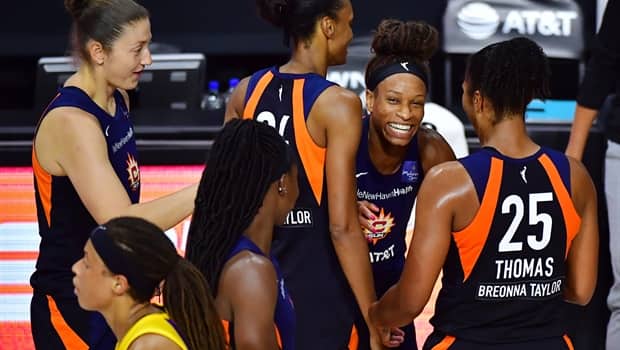 1 month ago
0:20
The Connecticut Sun continued their hot-streak with a tidy 73-59 win to cruise past the LA Sparks into the WNBA semifinals. 0:20

The Sun jumped out to a 22-8 lead and led from there after the Sparks shot just 21 per cent in the opening quarter. The Sparks rallied within six before Connecticut finished the second quarter on a 10-0 run. It would have been 12 straight points except Bonner's layup settled on the back of rim and remained there as the teams headed off the floor.

Briann January hit a 3-pointer early in the fourth quarter to give the Sun their largest lead of 20.

Candace Parker had 22 points and 14 rebounds for the Sparks, who were without third-leading scorer Nneka Ogwumike, sidelined with a migraine.

"Nneka does a lot for us as a team on both ends of the court," Los Angeles coach Derek Fisher said. "(We missed) her efficiency offensively on a night when it was difficult to find some rhythm on that end of the floor. She's a really good defender and rebounder, Most importantly her presence from a leadership stand point helps our team to stay centred some times."

Star guard Chelsea Gray was held to just four points and didn't have an assist for the first time since their loss to Minnesota in the last game of the WNBA Finals in 2016.

The Sparks came into the game as the league's top 3-point shooting team at just under 40 per cent but made only 2 of 18 against the Sun, missing their first 12. The 59 points were the fewest this season for Los Angeles.

The Sun, swept by the Sparks during the regular season, scrambled to reach the playoffs after losing their first five games. They beat Chicago by 14 in their first-round game.