Alysha Clark's putback at the buzzer lifted the Seattle Storm past the Minnesota Lynx 88-86 on Tuesday night in the first game of the semifinal series.

It's been a crazy 48 hours for the Seattle Storm and it was only fitting that their WNBA playoffs series opener had a wild finish.

Alysha Clark's putback at the buzzer lifted the Storm past the Lynx 88-86 on Tuesday night in the first game of the semifinal series.

Seattle inbounded it with 14.8 seconds left after Napheesa Collier tied it on an up-and-under move. Sami Whitcomb got it in the corner and drove the baseline for a layup that missed but it fell to Clark, who corralled it and released it just before the final buzzer.

"The last 48 hours have been pretty stressful and exhausting. not knowing what to expect, confused about everything. How is this happening?" Clark said. "You know you play the waiting game. sitting around waiting for testing results, sitting around waiting to be moved. Honestly, there's no other way this game would have ended after the last 48 hours have been."

WATCH | Clark cleans up miss to give Storm victory at buzzer: 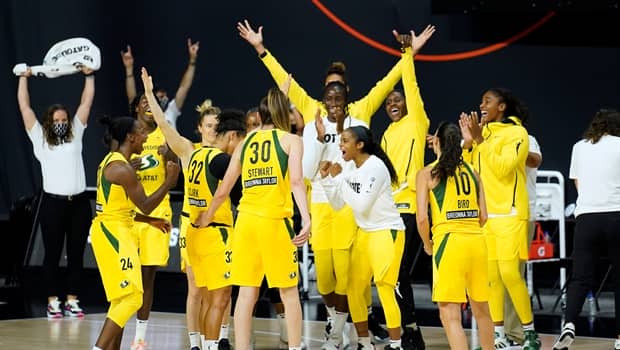 4 months agoVideo
1:16
Alysha Clark got a shot off just in time to give the Storm a win to open the WNBA semifinals. 1:16

Seattle, which has won seven straight games against Minnesota, hadn't played since Sept. 13 after earning a double-bye to the semifinals. The game was originally scheduled for Sunday, but it was postponed because of inconclusive COVID-19 tests with three players on the Storm. Seattle stars Breanna Stewart and Sue Bird had been off since Sept. 9 due to injuries.

Jewell Loyd scored 18 of her 25 points in the first half, and Stewart had 21 points and 10 rebounds for Seattle. Bird had 11 points, including two fourth-quarter 3-pointers, and eight assists.

Collier had 25 points, nine rebounds and six blocks for Minnesota. Odyssey Sims added 19 points and rookie of the year Crystal Dangerfield was held to four points.

Canada's Bridget Carleton had 14 points and four assists for Minnesota, but cooled off down the stretch following a hot start. 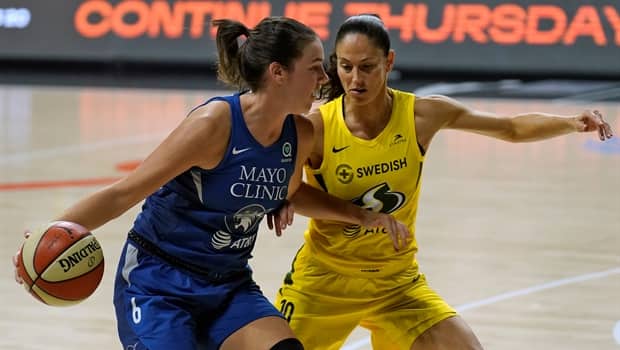 4 months agoVideo
1:01
Carleton made 4 three pointers in the first half of Minnesota's loss to Seattle. 1:01

"It's what we hoped for, put ourselves in position with five minutes to go," Minnesota coach Cheryl Reeve said. "Players from there made plays. Players from both teams had players making plays. I enjoyed watching our team competing, making plays when it was necessary. Seattle made just one more play. We defended pretty well, we just didn't finish the play."

Loyd blocked Sims' layup attempt and Clark made a layup at the other end to give Seattle an 84-81 lead. After Damiris Dantas tied it with a corner 3-pointer, Loyd put Seattle back in front with a driving layup.

Wilson takes charge to help Aces even series with Sun

A'ja Wilson had 29 points, seven rebounds and a career-high seven blocks to lead the top-seeded Las Vegas Aces past the Connecticut Sun 83-75 on Tuesday night to even the best-of-five playoff series at 1-1.

Wilson converted a three-point play with 1:03 remaining to break a tie at 75. After Connecticut's 17th turnover of the game, Wilson drove to the basket again, bobbled it and made the layup while being fouled. She missed the free throw, but Angel McCoughtry grabbed the rebound and Dearica Hamby made 1 of 2 free throws for an eight-point lead.

"We were going to win this game. I didn't want to be down 2-0," Wilson said of her mindset down the stretch. "Got to find ways to make it happen. Tried my best to do it."

DeWanna Bonner led Connecticut with 23 points and seven rebounds, and Briann January added 20 points. Alyssa Thomas, averaging 15.5 points and nine rebounds, left the game in the first quarter after injuring her right shoulder and did not return. 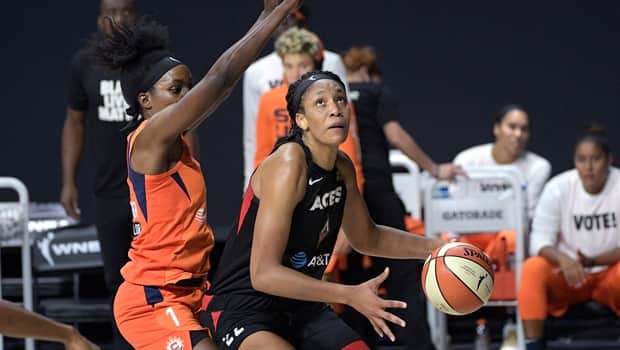 A'ja Wilson is clutch as Aces even series with Connecticut

Connecticut coach Curt Miller said he didn't know what Thomas' status was for the rest of the series.

"I will find out more," he said. "Dislocated shoulder is the rumour that's floating around the bench, but it's not confirmed."

Thomas returned to the bench late in the fourth quarter with her arm in a sling.

Jasmine Thomas, who scored a career-high 31 points in Game 1, was held to 10 points.

Las Vegas coach Bill Laimbeer is 5-1 in his last six playoff series when dropping first game and is now 9-1 in the next playoff game after his team loses by double digits.

McCoughtry, Hamby and Kayla McBride each added 11 points for Las Vegas. It was Wilson's 16th game with 20-plus points this season.