It was a record breaking night for Courtney Vandersloot.

The Chicago guard set the WNBA single-game record with 18 assists, helping the Sky beat the Indiana Fever 100-77 on Monday night.

Vandersloot tied the record, held by Ticha Penicheiro, at 16 on a drive to the basket, drawing two defenders and finding Ruthy Hebard under the hoop for a 89-74 lead with 3:22 remaining.

"I thought this record was untouchable Ticha set the bar very, very high," Vandersloot said. "I don't think this one will be touched very often. It's tough to get 16 assists in a game. This one is really special. My teammates were knocking down shots. They were as happy as I was and it makes it that much enjoyable for me." 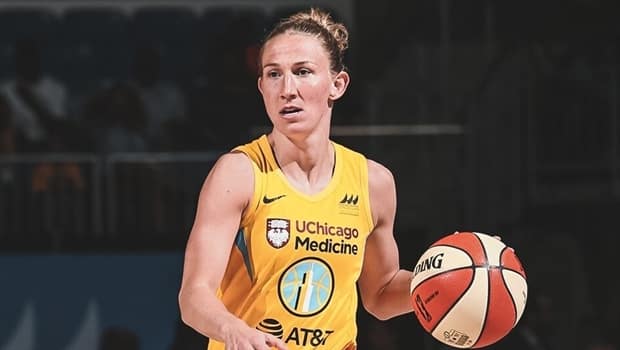 2 months ago
1:04
Courtney Vandersloot of the Chicago Sky set a new WNBA record with 18 assists in a single game. 1:04

Vandersloot had gotten 15 assists 3 teams and looked like she might have to settle for that again as she left the game with a few minutes left.

"It puts a little cherry on top. it's really special. I know she was happy for me," Vandersloot said of her wife hitting the record shot." She wanted to do that for me. It was initially for Ruthy, but the backup plan was always Allie. You can always count on Allie to knock down some late shots."

Penicheiro, who reached 16 assists in 1998 and 2002, tweeted a congratulatory note to Vandersloot after the game. Vandersloot finished with 13 points and is averaging 9.3 assists this season which would also break her own mark of 9.1 set last year.

Gabby Williams and Kahleah Copper each scored 21 points for Chicago (11-6) while Quigley added 19.

Teaira McCowan had 15 points and 11 rebounds for Indiana (5-11). Candice Dupree had 14 points and Canadian Natalie Achonwa 13.

Rachel Banham made all six of her field-goal attempts and scored 18 points off the bench for Minnesota (11-5). Damiris Dantas had 17 points, nine rebounds and four assists.

Minnesota shot 53.6 per cent from the field, including 14 of 27 from 3-point range. Banham made four 3-pointers, and Dantas and Dangerfield had three apiece.

Starting for the Lynx, Canada's Bridget Carleton missed her only shot attempt, but took on the facilitator role by racking up a career-high 10 assists in the victory.

Chelsea Gray scored 18 points for Los Angeles (12-4), which has already clinched a playoff spot. Candace Parker had eight points and nine rebounds, and Nneka Ogwumike, averaging 12.3 points and 4.4 rebounds, did not play due to back soreness.

Both games were originally scheduled for last Wednesday, but were postponed because the WNBA players decided not to play following the police shooting of Jacob Blake.