Sixers push back against Raptors to force deciding Game 7

Jimmy Butler scored 25 points while Ben Simmons had 21 and the Philadelphia 76ers rolled over the Raptors 112-101 on Thursday.

The Raptors arrived in Philly on the heels of their biggest playoff victory in franchise history. A spot in the Eastern Conference finals was just 48 minutes away. It almost felt like a sure thing.

But that confidence evaporated with a sluggish start and poor shooting. And now Toronto's big dreams of a long playoff run have come down to just one game.

And moments after a 112-101 blowout loss to the Philadelphia 76ers, Kyle Lowry, his black No. 7 baseball hat pulled low over his forehead, talked about the "big game" they're facing.

"We have to play harder," Lowry said. "We have to do everything we need to do to win the game. It's do or die, win or go home, really."

Jimmy Butler scored 25 points while Ben Simmons had 21, more than his points from Games 4 and 5 combined, and the 76ers rolled over the Raptors to send the series back to Toronto for a do-or-die Game 7 on Sunday.

"It was amazing focus. Everybody was locked in," said Simmons, who'd had a lengthy pre-game chat with Hall of Famer Julius (Dr. J) Erving. "We knew what was at stake."

Kawhi Leonard had 29 points and 12 rebounds to top the Raptors, but went 0-for-4 from the three-point line. Pascal Siakam added 21 points, while Lowry had 13. But reminiscent of Games 2 and 3, no other Raptor scored in double figures. Serge Ibaka had nine points before fouling out with just under four minutes to play. 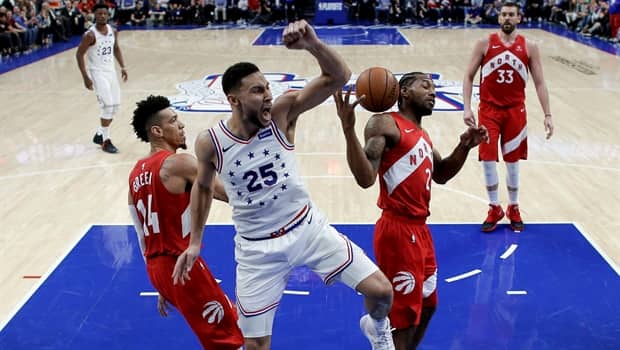 Seemingly recovered from the illness that had plagued him for the previous couple of games, Joel Embiid — announced last in the pre-game introductions while a video of his airplane celebration was shown on the Jumbotron — had 17 points to go with 12 rebounds.

"I knew I had to come in with high spirits," Embiid said. "If I've got to play 45 minutes and push myself out there, that's what I'll do."

When Embiid walked off the Scotiabank Arena court after Tuesday's blowout, he'd told Drake the Sixers would be back in Toronto for a Game 7. Turns out, he was right.

The Raptors had arrived in Philly on the heels of a 125-89 thrashing of the Sixers in Toronto — the largest post-season margin of victory in franchise history, and a win so dominant they'd led by 40 points.

The Raptors knew the Sixers would be hungry, and buoyed by the team's noisy fans back home at an ear-splitting Wells Fargo Arena.

"They'll come out hard," Leonard had said of Philly at the morning shootaround. "Nobody wants to go home, obviously both of us is one game away from winning or losing."

Added Lowry: "They're going to come out swinging and playing hard but we have to play more desperate than them."

The Raptors, who roared past Orlando 4-1 in the first round of the playoffs, couldn't match the ferocity of the Sixers, who dominated most of the night. The Sixers led for all but about a minute of the first quarter, and stretched their advantage to 19 points in a first half that featured wild momentum shifts.

Philly took an 87-67 lead into the fourth quarter and never let up. Trailing by 24 points, a Lowry three-pointer capped a mini Raptors run that pulled Toronto to within 19 points with 6:55 to play, but Toronto couldn't sustain the momentum and a three-pointer by JJ Redick with 4:23 to play had Philly back up by 22. Nurse subbed off his starters with 3:33 to play.

"The mood in the locker room, you could sense the serious side. They got the moment and I think [Butler] got it as much as anybody and led us," said 76ers coach Brett Brown.

The Raptors couldn't buy a basket for most of the night, shooting a horrible 9-for-36 from three-point range, many of them wide open looks.

"We tried to get back into it but we didn't shoot the ball well tonight," Lowry said. "We had a lot of open looks early and we missed them."

The Sixers outhustled Toronto on the boards, grabbing 52 rebounds to the Raptors' 34.

While Wells Fargo was an inhospitable environment, the Raptors had clinched playoff series on the road the past two seasons, in the opening round in Milwaukee in 2017 and in Washington last year.

The Raptors, who rebuilt last summer and at the trade deadline specifically with the goal of an NBA finals appearance, have only once played in the conference finals — in 2016 versus Cleveland. The Sixers kept them from the 2001 conference finals when a Vince Carter jumper at the buzzer in Game 7 bounced off the rim.

In every game of this series, the leader after the first quarter has gone on to win the game. The Sixers raced out to an early eight-point lead, the Raptors responded with an 8-0 run, and Philly replied with a 10-0 to take a 29-21 lead into the second quarter.

The 76ers kept the momentum through the start of the second, using a 19-8 run that straddled both quarters to go up by 19 points. The Raptors responded again, pulling to within seven points on a running dunk by Leonard. But the Sixers outscored Toronto 16-8 to end the half. And when Butler stole the ball from Leonard for an easy layup with 0.4 seconds left, it sent Philly into the halftime break with a 58-43 lead — and prompted chants of "Ji-mmy But-ler!"

The Milwaukee Bucks, who dispatched Boston 4-1 in their semifinal series, await the winner.