How a slowed-down Pascal Siakam could speed up the Raptors

Pascal Siakam's dizzying speed is matched only by his equally dizzying rise. From a tough rookie season to the NBA's most improved player just two years later, the Cameroonian forward has already taken giant leaps on the court. Now, with the departure of Kawhi Leonard, Siakam is primed for more.

Pascal Siakam's dizzying speed is matched only by his equally dizzying rise.

An emergency starter for 38 games of his 2016-17 rookie season, Siakam looked immediately out of place. Sure, he provided energy, but he couldn't really do anything else on the basketball court.

Siakam's sophomore season gave reason to hope. Though predominantly used off the bench, Siakam maintained his rookie energy level while adding touch at the rim and flashing advanced passing ability.

The third year was the come-up for the Cameroonian first rounder. Siakam's spin move consistently befuddled opponents, his shooting stroke emerged and some ball-handling prowess arrived.

Siakam was crowned the NBA's 2018-19 most improved player. He scored 26 points in Game 6 of the NBA Finals as the Raptors won the championship (the Raptors are the reigning NBA champions, in case you forgot).

On Saturday, the Raptors rewarded Siakam with a four-year, $130 million maximum contract extension, before the forward was set to hit restricted free agency in the off-season.

"We've seen his game continue to grow and grow and you have ups and downs," said Raptors president of basketball operations Masai Ujiri, "and this season I think is a good season for him to actually grow as a player to potentially get to where we all feel he can be.

"We think he can be one of the best players in the league." 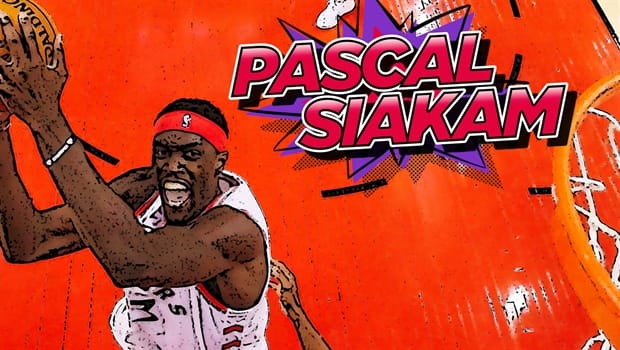 What makes Pascal Siakam so good?

1 year agoVideo
1:21
Pascal Siakam burst onto the scene last year, going from depth player to star. Now, after signing a four-year max deal worth $130M US, he's expected to become a focal point for the Kawhi-less Raptors. Watch the three aspects to his game that make him so good.  1:21

In a Raptors lineup stripped of Kawhi Leonard and Danny Green, the time is now for Siakam to prove Ujiri correct.

At media day earlier in October, head coach Nick Nurse said the chances will be there for the 25-year-old.

"There's opportunities for guys to maybe either take on new identities, certainly expand roles, maybe even take on new roles and I think that's where that sheet of paper is still a blank."

Following his big payday, the key to further progress for Siakam may be to avoid his natural instinct and slow down.

"He's a guy that's had to do everything with speed and fast and I see him maybe slowing down a bit at times — at the right times," Nurse said. "Not everything can be fast or done fast, but let's see."

Picture Siakam, and you probably see him flying up the court after an opponent's missed shot, receiving a touchdown pass from Kyle Lowry and scoring with either a crafty finish or an emphatic dunk.

You may also see Siakam attacking a defender from the wing and hitting him with a spin before finishing with an easy lay-up.

"I think Pascal has had a super focused summer. And again, just continues to look like a more mature player, more well-rounded player. His tempo looks different. He's gonna have a great year," Nurse said.

Those are three of the top ten defenders in the league, pretty easily.

Siakam averaged 19 points and 2.8 assists per game in the playoffs.

Nurse and Siakam both said the forward would spend more time with the ball this upcoming season. That means less catch-and-go, and less catching the opponent by surprise.

"I think the mid-range is probably gonna be something that I'll have to do," Siakam said. "Obviously when you're being guarded by taller players, being able to give what the defence gives you if that's a three or mid-range or be able to drive by anybody."

Siakam shot 37 per cent from three-point range last season before falling to 30 per cent in the playoffs. That's when defences began to zero in on him and the game began to move slower.

Siakam, then, must weigh his options more carefully with the ball in his hands. He has many tricks in his bag at this point, but as Leonard showed, it's knowing when to use those tricks that turns a good player into an all-star, and an all-star into a superstar.

Alas, Siakam is not Leonard. He still needs to find a balance between recklessness and control, lest he lose what elevated his game in the first place.

Lowry said the key for Siakam is a consistent jumper.

"Defenders back off, they're gonna back off him because of his talent and his speed and his feel at the basket … I think that jump shot, taking that mid-range, that three consistently, just taking it and being consistent with it will help him take the next leap."

We know Siakam can play a key role on a championship team. We know he can stare down some of the best defenders in the world and score.

The only question remaining is his ceiling, and there doesn't appear to be a limit. The coming season should provide some answers.