With roster nearly at full strength, Raptors find the juice to bottle up Thunder

Norman Powell scored 23 points, and the Toronto Raptors held off a furious rally and beat the Oklahoma City Thunder 130-121 on Wednesday night.

Norman Powell doesn't need to work his way back into form.

The Toronto guard missed 11 games with a left shoulder injury before returning to action this week. In his second game back, he scored 23 points, and the Raptors held off a furious rally to beat the Oklahoma City Thunder 130-121 on Wednesday night.

Powell scored 20 points on Sunday against the San Antonio Spurs in his first game back, then followed up with another strong performance. He made 9 of 11 shots, including 3 of 4 3-pointers.

"I've just tried to come back and assert myself and be aggressive in the flow of the offence and play my game and continue to take what the defence is giving me," Powell said.

Pascal Siakam and OG Anunoby each added 21 points for the Raptors, who shot a season-high 61.2 per cent from the field. 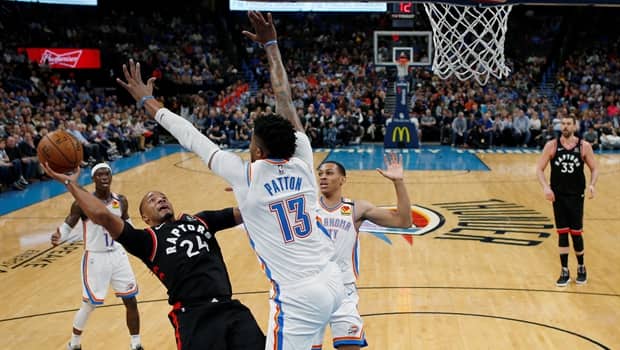 Dennis Schroder scored 25 points, Danilo Gallinari scored 23 and Shai Gilgeous-Alexander added 21 for the Thunder, who cut a 30-point deficit to three before Toronto held on.

"Just calmed down a little bit," Toronto guard Kyle Lowry said. "Just got a little bit more patient. Got the ball in the guy's hands that we need to have the ball in. That's what we need to do. We find a way, but we can't put ourselves in those positions all the time."

Toronto led 73-43 in the second quarter before the Thunder closed the first half on a 12-0 run. Gilgeous-Alexander hit a 3-pointer as time expired in the second quarter to cut Toronto's lead to 73-55. Former Thunder player Serge Ibaka scored 13 points on 6-for-6 shooting before the break. The Raptors led 97-83 heading into the fourth, and had a 21-point lead with 6:39 to play.

Oklahoma City made a huge comeback try late. Gallinari threw down a monster dunk and was fouled with 2:39 to play. The free throw cut Toronto's lead to three, but Toronto closed the game on an 8-2 run.

"You don't want to go outside yourself," Powell said. "When they go on a run like that, you just try to get everybody on the same page."

The Thunder have made several big rallies this season, but like Saturday against the Los Angeles Lakers, a large deficit was too much to overcome.

"I think to start the game, we don't bring it every game," Gilgeous-Alexander said. "When we do bring it, we're tough to beat and can play with anybody. But obviously, you guys see that when we don't, we get down against a lot of teams. That's something we'll fix and we'll get better at. I'm not worried about that."

Watson recently completed a 10-day contract with the Atlanta Hawks and appeared in two games.