Canadian Shai Gilgeous-Alexander tied his career high with 32 points to lift the Oklahoma City Thunder to a 98-97 victory over his hometown Toronto Raptors on Sunday.

1st time ever 4 Canadians scored in a NBA game

When Shai Gilgeous-Alexander drove to the rim to bank in a floater with 36 seconds to play Sunday night, he didn't just clinch Oklahoma City a victory.

In just his second season in the NBA, the 21-year-old Canadian guard made history.

Gilgeous-Alexander matched his career high with 32 points — for the third time in nine days — to lift the Thunder to a 98-97 victory over his hometown Raptors. It was the most points ever scored by a Canadian versus the Raptors, one point more than Rick Fox scored in 1998 and Andrew Wiggins matched in 2016.

"I did not know that," Gilgeous-Alexander said with a grin. "That's cool though."

Kyle Lowry and Fred VanVleet had 20 points apiece for the Raptors (22-11), who were missing Pascal Siakam (groin), Marc Gasol (hamstring), and Norman Powell (shoulder) for the sixth consecutive game. Patrick McCaw added 13 points, while Serge Ibaka had 12, and Terence Davis finished with 11.

Gilgeous-Alexander was the best player on the floor for most of the night. The Toronto native added seven rebounds, three steals, and two assists, and his eight field goals in the first half alone matched the rest of his team's combined. 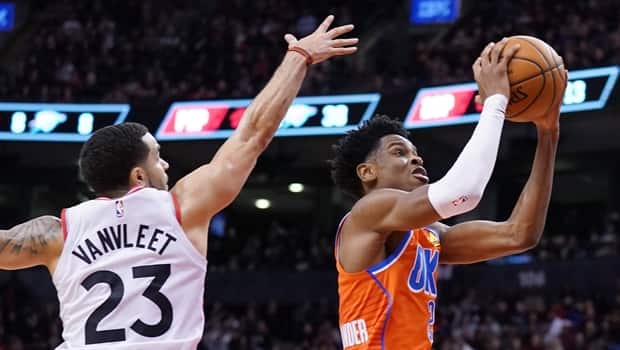 11 months agoVideo
1:25
Shai Gilgeous-Alexander scored a career-high 32 and put up the most points by a Canadian in a game against the Raptors.  1:25

Paul said both Gilgeous-Alexander and Thunder teammate Luguentz Dort of Montreal had this game circled on their calendars since training camp. When told Gilgeous-Alexander's 32 points marked a Canadian record, Paul laughed.

"Did you tell him that? Oh man, we ain't going to hear the end of that," the veteran guard said. "He's been excited to come back. Everybody here in Canada, know you all got a real one. He loves home, he loves home."

His hometown team didn't much love him on Sunday.

Playing for the fifth time in eight days, and 24 hours after an impressive 113-97 win in Boston, the Raptors couldn't put any distance on the Thunder in a game that saw 20 lead changes.

Leading 80-76 to start the fourth, the Raptors saw their lead evaporate, and Paul's basket with 1:01 to play in a nailbiting final frame gave the Thunder a one-point lead. VanVleet's pair of free throws put Toronto back on top. But Gilgeous-Alexander scored with 36 seconds to play, then the lanky six-foot-six guard hauled down a decisive defensive rebound on a VanVleet miss to clinch the victory for his team.

Gilgeous-Alexander, who grew up watching games at Scotiabank Arena, said it felt "good" to win in his home town.

"But all of it, honestly, wouldn't have meant anything if we didn't win, that was the best feeling," he said.

'People around me don't let my head get too big'

The rising star, who scored 19 points in his first visit to Toronto last season with the L.A. Clippers, has been praised by coaches around the NBA for his mix of confidence and humility. He credits his parents, particularly his mom Charmaine, a sprinter who competed in the 1992 Olympics for Antigua and Barbuda.

"I work hard, so I have confidence. And the people around me don't let my head get too big — especially my mom, she tells me I suck every day," Gilgeous-Alexander said with a laugh before the game.

Gilgeous-Alexander has played the best basketball of his career over the past six games, recently joining Wiggins, Steve Nash, and Jamaal Magloire as the only Canadians to average 20-plus points over five games. Sunday's win was his sixth straight game with more than 20 points.

Raptors coach Nick Nurse, who'd love to be coaching Gilgeous-Alexander when Canada plays its last-chance Olympic qualifying tournament this summer in Victoria, had plenty of kind words for the young player prior to tipoff Sunday, saying there might not be a player with a quicker "first step, blow-by move" in the league. He spoke of his strong play down the stretch. He couldn't have been more correct.

"He played just how he's been playing," Nurse said after the game. "What I said was his first step is amazingly quick, and he slows down at the end. He blasts in there and slows down and manoeuvres around whatever's coming at him. I thought he made a good [last basket] there."

Four Canadians on the court at once

The Raptors' win last month over the New York Knicks was the first time four Canadian players have been together on the floor in an NBA game, but Brissett didn't score then.

Neither team led by more than five points in a first quarter that saw the Thunder connect on just one of their eight three-point shots in the frame. Paul's 27-footer with half a second left in the quarter would be the only three of the Thunder's first 12 three-pointers to fall, putting Oklahoma City up 22-20 to start the second.

"That's a good team and on a back-to-back, it's going to be a little sluggish out there," Nurse said. "I thought we played pretty hard, I was proud of how hard we played."

Brissett's alley-oop dunk at 10:15 of the second quarter saw the Raptors go up by five points. VanVleet's three-pointer with 3:44 to play in the half gave Toronto its largest lead of the game to that point — eight points — but the Thunder closed with a 13-5 run to tie the game 47-47 at halftime.

Paul's long jumper early in the third gave OKC an eight-point cushion, but the Raptors rallied, closing the quarter with a 7-1 run to head into the fourth with a four-point lead.

Toronto caps its busiest month of the season — 16 games and three back-to-backs — on New Year's Eve when it hosts the Cleveland Cavaliers.