Brand new Raptors, Kawhi murals to be unveiled ahead of Game 1

Toronto Raptors fans wanted to squeeze a little bit more out of that historic win over the weekend that sent their team to its first NBA finals, so plans are underway to install two new murals along the city's Queen Street West district in time for Game 1 in Toronto against the Golden State Warriors on Thursday.

Toronto Raptors fans wanted to squeeze a little bit more out of that historic Game 6 victory that sent their team to its first-ever NBA Finals — and revel in the celebration before the reality of basketball's biggest event and the Golden State Warriors set in.

On Sunday afternoon in Toronto on Queen Street West, less than 24 hours after the win, fans lined up in front of OD Toronto, the building now famous for the Kawhi Leonard larger-than-life murals.

Many of them basked in the warm glow of the sun in Raps apparel, all waiting to get inside and get a photo with the mural of Kawhi Leonard's buzzer-beater against the Philadelphia 76ers. Groups of people also gathered across the street, stopping cars at times, to get a photo of Leonard on the façade of the store.

Plans are underway to install two new murals, something that will happen before Game 1 in Toronto against the Warriors on Thursday.

The line-up keeps growing outside OD Toronto on Queen West — fans can’t get enough of Kawhi. Getting photos with mural on the wall inside. <br><br>Security at the entrance letting groups in slowly. <a href="https://twitter.com/hashtag/WeTheNorth?src=hash&amp;ref_src=twsrc%5Etfw">#WeTheNorth</a> <a href="https://t.co/NemDHanAgB">pic.twitter.com/NemDHanAgB</a>

The OD Toronto building has become famous during this 2019 playoff run for its massive murals of Leonard gracing the black-bricked exterior. The first one popped up in advance of the second round against Philadelphia.

After Leonard's heroics in Game 7 against the Sixers, the owners took it to a different level. A new one went up — the bounce-around-the-rim winner, with Leonard's tongue sticking out as he arched the now famous shot at the basket. And inside the building, that other famous photo of the same play — Leonard squatted on the baseline watching the ball drop, etched on the wall.

It even drew the attention of legendary California rapper Snoop Dog.

The legend of Leonard continues to grow, and it means new murals are once again on the way.

"I think moving into the [NBA] Finals, it's about the team now. It will be a surprise, but we have to involve the team," Shahin Shamshiri, co-owner of OD Toronto, said.

"Kawhi will still get his shine inside the store. I can't say more than that."

Born in Iran, Shamshiri moved to Toronto at the age of two — this is his home as far as he's concerned. He bursts with pride as he watches droves of people spill into his store, smiling as they take photos with the Leonard.

"I love this energy. It makes me proud to be from here," Shamshiri said. "They all just want to be a part of this moment. This is Toronto history. This will be a moment we never forget."

Shamshiri is staying tight-lipped about what fans can expect ahead of the NBA Finals, but does hint at the Leonard slam over Milwaukee Bucks star Giannis Antetokounmpo in the fourth quarter of Game 6 as having potential. Might that be the next memory etched on the inside wall? Shamshiri won't say just yet. He just wants to revel in this moment a little bit longer.

"It still hasn't fully set in that we're heading to the championship. We already feel like we've won everything," he said. "We feel like we have it all. Toronto deserves this moment. And we appreciate it."

For as many moments as Leonard has provided this playoff run leading the Raptors to victory — and they will live on in Toronto sports history forever — there's also a continued appreciation for how this team is coming together in key moments.

That was evident during the start of the fourth quarter of Game 6 when Kawhi sat on the bench and watched the Raptors claw their way back into the game.

"When I was on the bench to start the fourth quarter, my teammates did a great job to pick up that lead," Leonard said. 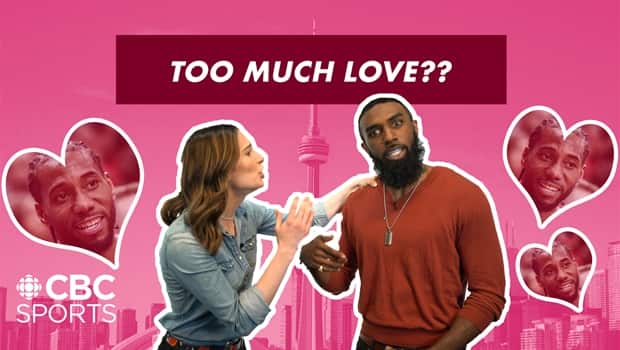 Is Toronto going too far with Kawhi Leonard?

2 years agoVideo
2:41
Toronto fans are throwing a lot of free stuff at Kawhi Leonard. But how much is too much? 2:41

The Toronto faithful adore their King of the North. They want him to stay for at least another season, obviously. That's all for another day.

But for right now, as the NBA Finals near, Leonard is deflecting attention in a city obsessed with their superstar.

"I don't care about being the best player, I want to be the best team," Leonard said.

"We're in the finals and we're not done yet."