The Toronto Raptors have advanced to the second round of the NBA's playoffs. Toronto beat the Milwaukee Bucks 92-89 in Game 6 of their Eastern Conference quarter-final. 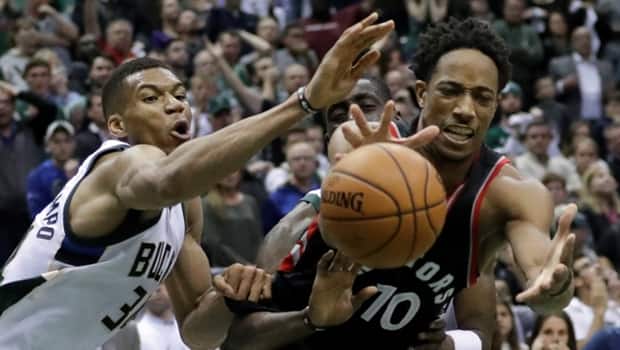 The Toronto Raptors have made a habit out of doing things the difficult way.

So when coach Dwane Casey met with the media after the Raptors' roller-coaster Game 6 victory over Milwaukee that sent them into the Eastern Conference semifinals and a showdown with the Cleveland Cavaliers, all he could do was shake his head.

"To close out on the road is one of the hardest things to do in the NBA. I don't care who you are, what team you are, it's very difficult to do."

No quit from Bucks

DeMar DeRozan scored 32 points as the Raptors held on to beat the Bucks 92-89, but not before watching their 25-point lead obliterated amid a fierce, crowd-fuelled Milwaukee comeback. The Raptors clinched the best-of-seven series 4-2 to advance to the conference semis which begin Monday in Cleveland.

Kyle Lowry added 13 points, while Serge Ibaka had 11 boards but just seven points before fouling out for Toronto.

The Raptors, who had never won a playoff series in less than the maximum number of games, dominated for much of the night and led by as many as 25 points midway through the third quarter. But the Bucks responded with a 15-3 run to cut Toronto's lead to 74-61 heading into a nail-biting final frame.

The Bucks rode their momentum, while the Raptors coughed up one ball after another, and when Jason Terry drilled a three-pointer with 3:06 to play, it gave the Bucks their first lead since the first quarter. The roar in the BMO Harris Bradley Center was deafening.

In the post-game locker-room, the Raptors talked about the ensuing huddle. DeRozan, Lowry and Cory Joseph preached calm to their teammates.

"Them talking, calming us down in the huddle being those leaders and just reassuring us we were fine," Patrick Patterson said. "There was enough time left on the clock. They made their run but we can easily make ours and that is exactly what happened."

Added Joseph: "It's human nature to get a little tense when things aren't going your way. And the whole building is against you on the road. It's human nature. You have to fight against that to calm yourself down and still play the game.

In a fourth quarter that saw Toronto score just five field goals, Patterson and Joseph responded with two of them — Patterson scored on a cutting dunk, then Joseph drilled a three, and Toronto was back up by three. DeRozan's driving dunk with 49 seconds to play gave Toronto a five-point cushion.

Terry gave the Bucks one last gasp, connecting on a three to make it just a two-point game with 16 seconds left. But DeRozan scored two free throws, then Patterson intercepted Tony Snell's inbounds pass to clinch the win, DeRozan spiking the ball victoriously.

Lowry was asked about the big baskets by Joseph and Patterson, and the point guard's trust in his teammates down the stretch.

"[DeRozan and I] talked about it in the locker-room, we both were completely calm," he said. "We knew they were going to make a run, we knew the situation. You've gotta stay calm.

"And for us, we wouldn't be here, we wouldn't do the things we do, without our teammates, simple as that. We are one team, one through 15. We've got a couple of guys in the D League right now, they won a championship (also Thursday night) — congratulations to those guys. We on the same team, same page, we're all in the same locker-room. We're all equal. Without them, we wouldn't be who we are."

All the pre-game talk had been about closing this series in six games, both to avoid the Game 7 pressure the Raptors know way too well, and give themselves a breather before tipping off against the resting Cavaliers in Cleveland.

Toronto lost to Indiana and Miami last year in Game 6 before rallying to win Game 7. Three years ago, the Raptors dropped Game 6 against Brooklyn before being beaten by the Nets in Game 7.

"We talked about it, how beneficial it would be, how important tonight is. But again, if Milwaukee will co-operate that would be great," Casey had joked pre-game.

Milwaukee wasn't in the mood for co-operating, particularly Giannis Antetokounmpo, who played all but 81 seconds, scoring 34 points and nine rebounds. Thon Maker, who played high school basketball in Orangeville, Ont., had five blocks.

"Both teams played their heart out there in that second half," said Bucks coach Jason Kidd.

The Raptors shot 46 per cent on the night, and made nine of their 22 three-point attempts. The Bucks shot 42 per cent.

The second-seeded Cavaliers, meanwhile, have been off since sweeping No. 7 Indiana on Sunday.