Toronto Raptors to face Brooklyn in 1st round of playoffs after clinching No. 2 seed

Pascal Siakam scored 26 points including two big three-pointers down the stretch Sunday and the Toronto Raptors clinched the second seed in the Eastern Conference with a 108-99 victory over Memphis.

After the NBA's four-month break due to COVID-19 — including a two-month stretch where he couldn't practise at all — Pascal Siakam is finally back.

Siakam scored 26 points including two big three-pointers down the stretch Sunday and the Toronto Raptors clinched the second seed in the Eastern Conference with a 108-99 victory over Memphis.

The 26-year-old who's been Toronto's first offensive option this season after losing Kawhi Leonard last summer to free agency, hadn't played up to his potential through the Raptors' first four games of the NBA's restart at Walt Disney World.

"Obviously a couple games there where you feel like you didn't play as well as you could have. . . I had to get a rhythm," Siakam said. "Can't get down on yourself, especially when you've done this. I always feel like there's going to be periods where things aren't going to go the way that you want, but you've got to continue to play, continue to do what you do and figure it out. I've always been able to do that."

For the fifth consecutive season the Raptors (50-19) have won at least 50 games, after going their first 20 seasons falling short of that mark. They improved to 4-1 in the NBA's restart at Walt Disney World.

Meanwhile, the Brooklyn Nets picked up a 129-120 victory over the Los Angeles Clippers Sunday night to clinch the seventh seed in the East and a first-round playoff matchup with the Raptors.

Toronto lost to Brooklyn in seven games in the first round of the 2014 playoffs, the thrilling series that led to the creation of Jurassic Park fan zone outside the then-Air Canada Centre.

The Nets' confidence is high after going 6-2 under interim coach Jacque Vaughn. 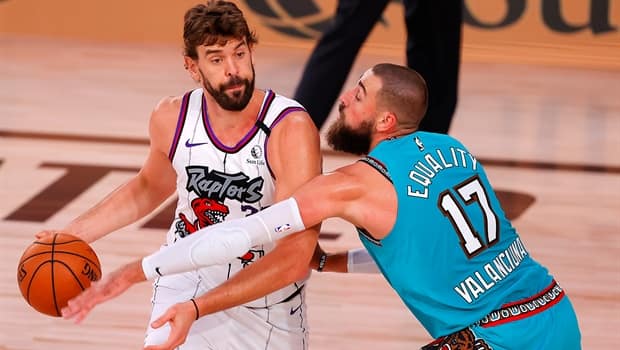 Marc Gasol, Raptors bounce back with win over Memphis Grizzlies

2 months ago
0:42
In his first game against his old team, Marc Gasol nailed a long-range three pointer to help the Raptors to a 108-99 victory over the Memphis Grizzlies. 0:42

"As far as going into Toronto, you know what to expect," Tyler Johnson said after scoring 21 points against the Clippers. "But then again, there's no home-court advantage. You play a basketball team in the same spot for however many games it takes to advance.

"But for us, we feel like it's about us," LeVert said. "If we move the ball well, if we play good defence, if we're locked into the game plan, we can win that series. We truly believe that. So we're going to go into that playoff matchup all the way locked in."

While there is no traditional home-court advantage in the NBA bubble at Walt Disney World, Raptors coach Nick Nurse said recently that he wasn't writing it off entirely. The league has been tinkering with game presentation, Nurse said.

It includes 300 of the team's fans appearing digitally on courtside video screens and manufactured crowd noise piped into the arena. During scrimmages in the Walt Disney World bubble, it had been so quiet Nurse said the opposing teams could hear him calling plays.

"There's crowd noise (now), you can see family members and coaches' family members and players' family members (on the giant video screens), there is a sense of personal touch to it," Nurse said. "It seems like they're tweaking a little bit more and more as they go here in the games, as they're learning things about how to put the game on in this setting.

"We're seeing familiar faces on those screens, and who knows what it'll evolve to here two months from now. So I don't want to discount the home court thing quite yet."

For the Raptors on Sunday, Norman Powell had 16 points, while Kyle Lowry finished with 15 points but nine turnovers.

"It wasn't very pretty tonight, it was hard work, but it was good defence and timely plays when we needed them and it's a 'W' and it's a 4-1 record in the bubble, and a 50-win season," coach Nick Nurse said. "I don't expect Kyle to have nine turnovers very often in a game. I think it's probably just a little bit of an anomaly."

Fred VanVleet chipped in with 14 points, and Serge Ibaka added 12 points and 12 rebounds.

Marc Gasol had 10 points and six boards in his first game against Memphis since the Raptors acquired him in a trade for Jonas Valanciunas in February of 2019. The move paid off as Gasol, who'd spent parts of 11 seasons in Memphis, was a key part of Toronto's NBA championship run.

Siakam shot 9-for-16 and knocked down four three-pointers, and his emergence is good timing for Toronto with three games left before the playoffs. The 26-year-old said he'd been unable to practise for two months during the coronavirus lockdown, the longest break of his career.

"I just felt like my energy was better," Siakam said.

"I thought Pascal had a nice night, obviously a little bit of uptick there," Nurse added.

Dillon Brooks of Mississauga, Ont., had 25 points to top the Grizzlies (33-38), who are trying desperately to hang onto a playoff spot in the jam-packed Western Conference. Vancouver-born Brandon Clarke had 16 points, while Valanciunas, who played nearly seven seasons for Toronto, had zero points but 10 rebounds.

The Raptors face the league-leading Bucks on Monday in their first back-to-back games in the bubble.

But with the second spot locked up and no chance of catching Milwaukee for first, Nurse said he'll likely go deep into his bench over the final three games.

"My gut feeling today is we have played pretty heavy minutes," he said. We have done what we kind of needed to do, I would say you will see a little bit of everything in the last three games as far as lots of guys playing, up and down the roster, some guys not playing, some guys playing limited minutes. I'd like to make a determination but as with everything in this bubble, in this scenario, it seems to be ever-changing for whatever reason.