Raptors rally past Rockets in Japan to open pre-season

Pascal Siakam scored 24 points and grabbed 11 rebounds and the Toronto Raptors, in their first game since winning the NBA Finals, rallied from a 17-point deficit to beat Houston 134-129 in Tokyo on Tuesday to open the NBA Japan Games.

When James Harden's night was over, defence got easier for the Toronto Raptors.

Pascal Siakam scored 24 points and grabbed 11 rebounds and the Raptors — in their first game since winning the NBA Finals — rallied from a 17-point deficit to beat the Houston Rockets 134-129 in Tokyo on Tuesday to open the NBA Japan Games.

The exhibition game at the Saitama Super Arena, a site for basketball at the 2020 Tokyo Olympics, was the NBA's first in Japan since 2003. The Rockets and Raptors return there to conclude the two-game series on Thursday.

Raptors coach Nick Nurse said he liked the arena and felt energy from the Japanese fans.

"We get 'Let's go Raptors' in a lot of cities," Nurse said. "It's nice to see it in Tokyo as well. Lot of Raptors fans around the world. It's great."

There were plenty of Rockets fans as well, for good reason.

Harden put on yet another dazzling offensive show, making his first six shots and finishing 11-for-14 from the field and scoring 34 points in 27 minutes.

His final points were a pair of free throws with 3:40 left in the third quarter that put Houston up 104-87. The star guard checked out shortly afterward, and Toronto outscored Houston 47-25 the rest of the way. 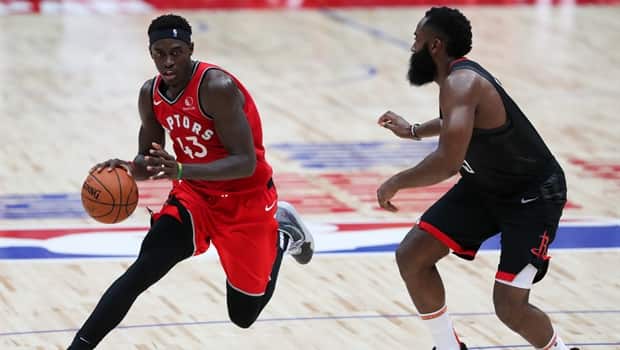 Raptors start pre-season with win in Japan over Rockets

"It was amazing," Harden said. "They got an opportunity to see what NBA basketball is about, what Rockets basketball is about. They brought the energy tonight. They were excited from the beginning of the game. They made us want to go out there and put on a show, so hopefully it can be that same kind of atmosphere on Thursday."

Russell Westbrook played for Houston for the first time, scoring 13 points in 21 minutes in his pre-season debut.

"It wasn't bad," said Westbrook, the longtime Oklahoma City star and former MVP now in his first season with Houston. "Unfortunately, we didn't win. That's the main goal. But it was good to get on the floor for the first time, get up and down, try to find a rhythm. We've got a lot of work to do."

Serge Ibaka scored 18 points and Fred VanVleet scored 16 for the Raptors, who played without Marc Gasol and Kyle Lowry.