Inside the basketball fortress that is Oracle Arena in sunny California, Golden State Warriors fans have become so accustomed to showing up during this time of year and watching their mighty team win. So when they found their team down 17 points with nearly six minutes left in game three Wednesday night against Toronto, some of the fans started heading for the exits — uncharted territory for a franchise basking in greatness.

Inside the basketball fortress that is Oracle Arena in sunny California, Golden State Warriors fans have become accustomed to showing up at this time of year and watching their mighty team win.

So when they found their team down 17 points with nearly six minutes left in Game 3 Wednesday night against Toronto, some of the fans started heading for the exits — uncharted territory for a franchise basking in greatness.

Every time the Warriors punched, the Raptors punched back a little bit harder.

The Raptors roared out of the locker room after halftime and scored 36 points in the third quarter to defeat the Golden State Warriors 123-109 to take a 2-1 series lead in the NBA Finals.

Now the Raptors are two wins away from capturing their first-ever NBA championship.

"I think our team plays hard. And I give our guys a lot of credit. I thought we answered a lot of runs," Raptors coach Nick Nurse said. "Each time they chipped, we kind of answered back. And that's kind of what you got to do if you're going to keep your lead." 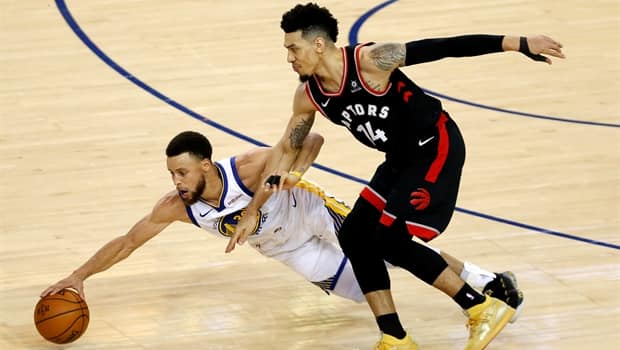 After the game Raptors fans, a large group of them, weren't ready to leave Oracle Arena. They stayed for at least 30 minutes after the game, chanting "Let's go Raptors" over and over.

Security guards tried to clear them out — that's when the fans broke out in a spontaneous and stirring rendition of O Canada. The security guards let them finish the song. The thrilled crowd of Raptors supporters finally headed for the exits.

It was the first loss at home for the Warriors in the NBA Finals since June 19, 2016 – a Game 7 defeat to the Cleveland Cavaliers. Fans watched, stunned, as their team tried to get back into the game.

But every time Steph Curry was able to make a circus three-point play, the Raptors responded.

Curry finished the game with a career-playoff high 47 points, but it wasn't enough.

"Toronto played an excellent game, made big shots every time they needed to," said Warriors coach Steve Kerr. "We never could get over the hump. Every time we fought back and kind of got it to six, seven or eight, whatever it was, they made big shots."

The Warriors are a wounded team right now, playing Game 3 without Klay Thompson, Kevon Looney and Kevin Durant. For five straight years, they've remained relatively healthy to this point in the season. But now, Golden State is facing adversity that it hasn't had to face during its four previous trips to the NBA Finals.

Now how will the Warriors respond? And will Thompson and Durant be ready to play on Friday? They are two key pieces to the Warriors winning.

Asked if the team was sacrificing Game 3 to rest both players, Warriors' Draymond Green offered this response.

"You don't sacrifice a Finals game to be healthy for the next one, because anything can happen. But at the same time you do have to be smart," Green said. "We would much rather have Klay for the rest of the series than putting him out there and losing him and then nothing. So no one sacrificed the game."

The Warriors are now 3-6 without Durant and Thompson in the lineup since 2016-17.

Balanced scoring for the Raptors

Kawhi Leonard led all Raptors with 30 points in the game. He only had nine at halftime, before exploding for 21 in the second half of the game.

But the biggest story for Toronto on Wednesday night was the balanced attack and players stepping up at pivotal moments.

"We all kind of just understand that this is our job and never get too up, never get too down," Lowry said. "Teams are going to make runs, and you're going to not win every game, you're not going to lose every game, but you can continue to grow to the point to play until June, and that was always the goal with this team was to get to June.

"You learn. You move on and you hope to do better the next time you encounter that challenge," said Gasol.

The Raptors did learn from their third-quarter lesson on Sunday. And they didn't let it happen again.