LeBron James sent Toronto into summer vacation for the third straight season as the Cleveland Cavaliers completed a series sweep of the Raptors with a 128-93 win in Game 4 on Monday night to advance to the Eastern Conference finals.

Cleveland will meet winner of Boston-Philadelphia series in conference final

After a season to remember, the Toronto Raptors disappeared Monday in a playoff series to forget — put to the sword yet again by the Cleveland Cavaliers.

In a must-win game with their season on the line, the Raptors were eviscerated. LeBron James and the Cavaliers had their way in a 128-93 blowout win to complete a four-game sweep in the Eastern Conference semifinal. 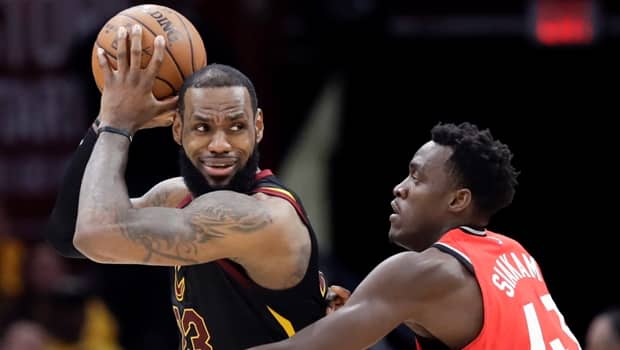 Toronto coach Dwane Casey, who has somehow become both a candidate for coach of the year and one facing the firing line, described his team as drained and "emotionally drunk" after close losses in Games 1 and 3.

When push came to shove Monday, the Cavaliers "played the way a championship team needs to play. And we didn't after the first quarter," he added.

"I thought our guys would come in and compete harder," he said.

"It's disappointing," he added. 'Because you want to go out fighting, scratching, clawing with your best effort ... But you don't want to go down that way, let go of the rope."

It was an embarrassing ending to a series in which Toronto had its chances despite its short time span.

While the Raptors were blown out 128-110 in Game 2, they had plenty of chances to win Game 1 — a 113-12 overtime loss during which the Cavaliers never led in regulation time. And in Game 3, they rallied to tie the game at 103-103 before James' memorable off-balance buzzer-beater.

There was no drama Monday as Cleveland led by four after the first quarter, 16 at the half and 28 after three.

A dour DeMar DeRozan, who had just eight points in Game 3 and was benched in the fourth quarter, took no solace from the slender margins of playoff basketball.

"It's life," said the Raptors guard. "You dwell on what should have happened, what could have happened in life, you'll drive yourself crazy. The fact of the matter is we're out, we're done. We've got to get back to reality, come tomorrow, work our butt off this summer and get ready for the next stage."

DeRozan's miserable series continued Monday as he was ejected for a flagrant foul-2 with 23 seconds left in the third for catching Jordan Clarkson, who was soaring to the basket, on the head with his arm. He finished with 13 points on five-of-11 shooting.

James had 29 points, 11 assists and eight rebounds and showed off more than few party tricks with Cleveland turning the screw on the Raptors as the game wore on. He had 15 points in the third quarter to hammer the nail into the Toronto coffin. Kevin Love added 23.

Jonas Valanciunas led Toronto with 18 points. C.J. Miles had 13 while Lowry had five.

The Raptors defence was shredded with the Cavaliers racking up 100 points in the first three quarters on 63.9 per cent shooting. All five Raptors starters and four of the Cavs starters watched from the bench in the final quarter, the outcome never in doubt. James was the only starter to see action, playing 4:22.

The fans at Quicken Loans Arena celebrated to the sounds of Drake's "God's Plan" during a timeout midway through the fourth.

Cleveland shot 59.5 per cent on the night, tying a franchise post-season record. James was good on 12-of-19 shots while fellow starters Love, J.R. Smith, Kyle Korver and George Hill combined for 66 points on 25-of-35 shooting.

Toronto becomes the first top seed to be swept prior to the conference finals since the NBA switched to a 16-team playoff format in 1984.

The Raptors' so-called culture reset — sharing the ball and firing three-pointers — resulted in a franchise record 59 wins, second only to Houston's 65. But it was the same old story in the post-season with no answers for James and the Cavaliers.

Cleveland swept Toronto in the Eastern semifinals last season and 4-2 in the East final in 2016.

While Cleveland was up by just four after the first quarter, Toronto came back and led 38-36 — only to see the Cavs pull ahead and keep their foot on the accelerator.

For the second game in a row, Casey changed his starting lineup. Serge Ibaka, who gave way to Fred VanVleet in Game 3, returned to start at centre in place of Valanciunas. Miles also slotted into the starting five with VanVleet back on the bench.

While Ibaka had five early points, Cleveland had success going straight through the heart of the Toronto defence — often unimpeded. Two early fouls forced Miles to the bench before the quarter was halfway over.

Cleveland was good on 12 of its first 15 shots, mixing in some good defence to pull ahead as the first quarter wore on.

James did not figure in the Cavs' first 15 points, with his teammates taking up the slack. DeRozan had seven in the first quarter.

Cleveland scored 18 of its first 26 points in the paint, prompting the introduction of Valanciunas, and led 29-19. DeRozan finished the quarter with a dunk to cap a 7-1 Toronto run that cut the Cavs' lead to 30-26.

With Valanciunas acting as enforcer at one end and scoring at the other, Toronto closed the gap and went ahead 38-36 after a 19-7 run. But an 11-2 Cleveland run orchestrated by James and Korver got the crowd back in it and gave the Cavs a seven-point lead.

Ultimate goal out of reach ... again

An Ibaka three-pointer cut the lead to 49-45 only to have the Cavaliers grab the game by the scruff of its neck. James played provider, feeding Love with an audacious behind-the-back pass, as Cleveland went on a 14-2 run to lead 63-47 at the half.

Then it got ugly. Gliding in the air, James increased the lead to 20 at 75-55 early in the third with a double-pump bank shot that had the crowd oohing. There was more to cheer before Cleveland finished with the fourth-highest in points total in franchise playoff history.

History was not on Toronto's side. Teams that trail 3-0 in a best-of-seven series are now 0-130 in the NBA.

Cleveland has won 10 straight playoff games — and 15 of its last 17 games (regular and post-season) — against Toronto. Cleveland is also 12-1 against Toronto at Quicken Loans Arena since December 2014.

"It's gratification but you're not satisfied, that's the way I like to put it," he said when the Raptors clinched first place in the East with three games remaining. "We haven't got to where our ultimate goal is."

They still haven't, which means a harsh spotlight may shine on Casey.

Asked about Casey's job security before the game, Cleveland coach Tyronn Lue said any talk it might be in jeopardy was absurd.

James was also kind in victory, saying the Raptors were "a very well-balanced, put-together team this year."

But not this series.