The Toronto Raptors' season came to end following a 113-87 Game 6 loss to the Cleveland Cavaliers on Friday.

LeBron and Co. prove too much and move on to Final 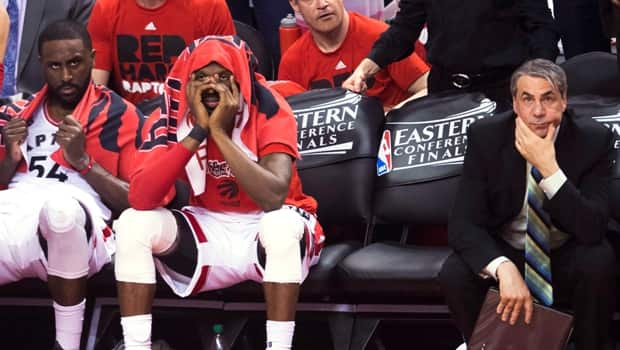 LeBron James scored 33 points, Kevin Love had 20 points and 12 rebounds, and the Cleveland Cavaliers advanced to their second straight NBA Finals by beating the Toronto Raptors 113-87 in Game 6 of the Eastern Conference finals Friday night.

It's the third finals appearance in team history for the Cavaliers. Cleveland lost to Golden State in six games last year and got swept by San Antonio in 2007.

For James, it's his sixth straight trip to the finals, including four with Miami. He broke the 30-point barrier for the first time this postseason and finished with 11 rebounds and six assists.

"We needed LeBron to set the tone for us early and I thought he did that," coach Tyronn Lue said.

James will be the eighth player in NBA history to appear in six consecutive finals and the first who didn't play for the Boston Celtics.

"He's just a great player," Lue said. "He's a proven winner. He's always won over the course of his career. To go to six straight finals is unbelievable."

James got there by taking down a Toronto team that set a franchise record with 56 wins and reached the conference finals for the first time in 21 seasons.

After a second-quarter dunk, James shared some verbal barbs with rapper Drake, the Raptors' global ambassador and the man who popularized the nickname `6ix' for Toronto.

Kyrie Irving had 30 points and J.R. Smith added 15 for the Cavaliers, who will face the winner of the Golden State-Oklahoma City series on Thursday.

Cleveland would open at home against the Thunder but would be on the road against the 73-win Warriors, who trail 3-2 against Oklahoma City heading into Saturday's Game 6.

The Cavs will be seeking to end Cleveland's 52-year championship drought, the longest by any city with at least three professional teams. No Cleveland team has won it all since the Browns blanked Baltimore 27-0 to win the NFL championship in 1964.

Kyle Lowry scored 35 points and DeMar DeRozan had 20 as the deepest playoff run in Raptors team history ended, much to the disappointment of a sellout crowd of 20,605 dressed in red and white T-shirts that formed a maple leaf pattern on either side of the court. Fans stood and cheered "Let's go, Raptors! Let's go, Raptors!" throughout most of the final three minutes.

Raptors coach Dwane Casey said reaching the conference finals was "a tremendous learning experience" for his young team, one that's "a step ahead" in its process of becoming a championship contender.

"We're learning," Casey said. "We're not where [the Cavaliers] are right now. We're going to be."

A dejected Lowry said it was hard to see the positive side of Toronto's best season ever.

Toronto prolonged the series with back-to-back home wins in Games 3 and 4 but never mounted much of a challenge to the conference champions in Game 6, falling behind by 21 in the third quarter.

The Cavaliers came in 0-4 at Air Canada Centre counting the regular season and playoffs, but looked much more like the team that handed the Raptors a trio of lopsided losses in Cleveland this series.

James scored 14 in the first and five of Cleveland's nine field goals were from long range as the Cavaliers led 31-25 after one.

After video review, the officials waved off a basket by Biyombo with 3:18 left in the period and gave him a flagrant foul for knocking down Love.

Tempers flared again early in the second when Richard Jefferson reacted angrily to catching an elbow from Jonas Valanciunas as the two battled for a rebound. Patrick Patterson came over and shoved Jefferson out of the way. Both Patterson and Jefferson were given technical fouls.

Cleveland made five more 3-pointers in the second and outscored Toronto 9-3 over the final 71 seconds to lead 55-41 at halftime. The Cavaliers made 10 of 15 3-point attempts in the first half, while Toronto was 2 of 12.