Raptors' Serge Ibaka could miss Game 6 because of sprained ankle

Toronto Raptors forward Serge Ibaka suffered a sprained left ankle Monday night and is questionable for Game 6 of the team's playoff series against the Boston Celtics on Wednesday.

Facing elimination, the Toronto Raptors have a key player nursing an injury and their top scorer stuck in a serious rut.

Forward Serge Ibaka wore a protective walking boot Tuesday after spraining his left ankle in Monday night's ugly 111-89 loss to Boston that left the Raptors one loss away from leaving the NBA bubble. He's not sure if he'll be good to go Wednesday for Game 6 against the Celtics.

And Pascal Siakam, the team's top scorer before the COVID-19 shutdown, has been MIA since the NBA's restart in Florida.

Ibaka, who's been a key player off the bench averaging 15.1 points and 8.2 rebounds this post-season, rolled his ankle when he fell awkwardly on the defensive end in the second half Monday.

"When it happened [Monday] night, I felt like I could still play. And then today, this morning it changed a little bit," Ibaka said. "So let's see tomorrow when I wake up." 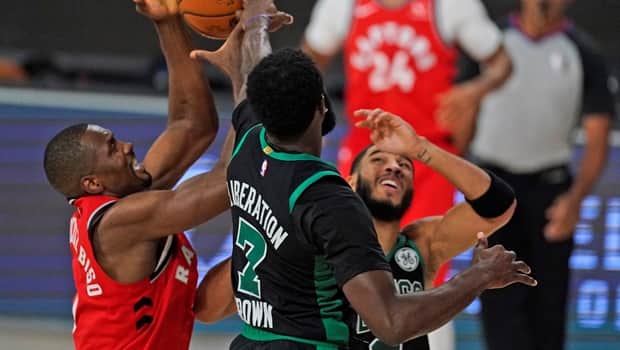 3 months agoVideo
1:27
Serge Ibaka looked to tweak something in the 4th and limped to the locker room. He did not return to the game. 1:27

The Raptors packed for Walt Disney World prepared to be there until the Finals next month. Now, their season is on the line Wednesday, trailing Boston 3-2 in their best-of-seven Eastern Conference semifinal.

But the defending NBA champions need everyone playing well against a Celtics side that is 6-3 against Toronto this season.

Siakam, who stepped up nicely after superstar Kawhi Leonard bolted during the off-season, has been a shadow of himself since arriving at Disney World. While his offence has been glaringly off, his defence at least had been keeping opponents honest — until Game 5, when Brad Wanamaker lumbered past Siakam like he was rooted to the floor.

The 26-year-old, who went without shooting a ball for a couple of months during the COVID-19 lockdown, has seen his scoring drop in the playoffs from an average of 22.9 points per game to 18. His field-goal percentage is 41.1, down from 45.3, and his three-point shooting is a woeful 21.3 per cent, down from 35.9.

Coach Nick Nurse was at a loss to explain Siakam's struggles. It's not inexperience, the coach pointed out.

"He has already kind of been through a deep playoff run and had spectacular games," Nurse said. "I am not sure why he has been so out of rhythm since the re-start in the bubble. He hasn't had a lot of great games.

"I think that is more of it other than here we are in the playoffs and he is supposed to be our leading guy. I'm not sure he's been in great rhythm since the restart and it's too bad because he was spectacular in last year's playoffs and spectacular all season long."

Ibaka, meanwhile, has been one of two players — Norm Powell is the other — to get any significant playing time off the bench this series.

Nurse sounded confident the 30-year-old shot blocker would be good to go Wednesday, saying "I think there's a good chance of that." 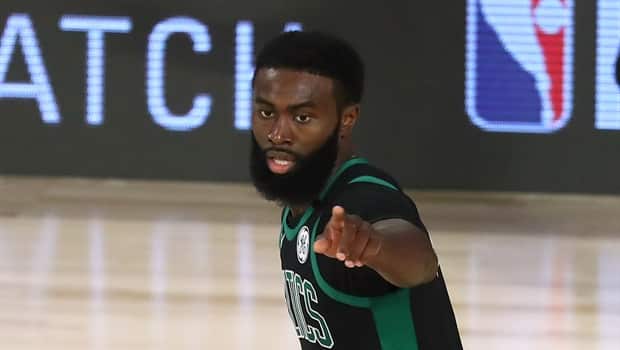 3 months agoVideo
1:00
The Raptors looked out of sync all night in the blowout loss. Jaylen Brown led the way with a game-high 27 including a poster dunk over OG Anunoby. 1:00

"Just like always, we go to the next guy. Don't know who that is yet," Nurse said. "We've obviously played Chris Boucher some in this series. Could be Rondae (Hollis-Jefferson), could be somebody else, but we'll just wait and see on that."

Fred VanVleet hadn't spoken to Ibaka about his ankle on Tuesday, but said he'd be surprised if the big man sat out the biggest game of the season.

"Serge is probably the best I've ever seen at taking care of his body, recovering, following his routine. So hopefully he can get back feeling good today and be ready for us," VanVleet said.

Ibaka said bubble-living isn't easy. He misses his daughter who lives nearby in Orlando.

"[But] I'm here for business and I have to take care of business," he said.

The Raptors looked gassed in Monday's loss. The final score didn't accurately reflect a game that felt more like a 50-point pounding. Nurse said his team didn't come out with any energy, and Kyle Lowry, who set the pace with terrific games in Toronto's two wins to tie the series, had an off night. The Raptors' all-star guard vowed to come out more aggressive in Game 6.

How can the team muster that energy if players aren't feeling it? It's difficult, VanVleet said, if shots aren't falling.

"You can fake it, I guess, but it runs out at some point if it's not organic," VanVleet said. "I don't care how much you cheer and scream and run and play hard, you're not making shots none of that stuff matters.

"So the shot-making kind of builds the energy for you and we've got to continue to step up and be confident and take and make those open looks. I thought we were just a little slow, a little soft early on in that game and they weren't and that was kind of the difference. Then it was just hard to get back from there. So I would be surprised if we came out the same way [Wednesday]."

Nurse was asked if Tuesday's practice was more about strategy or psychology.

"First of all, we gotta look ourselves in the mirror here. We showed the guys the tape, we tell 'em, you gotta look at this, man." he said. "Then soon as you can, you kind of forget about that one and get back to some pleasant thoughts about who you are, who you normally are, who you can be, what you've got to play like as a group or an individual. The kind of spirit we've got to bring.

"Probably leads to the emotional side there, what mindset are we going to bring?"

Nurse pointed out that against Boston, the Raptors tend to sag more quickly when shots aren't going in.

The Raptors have lost seven times this season by 15 or more points, and Boston is responsible for four of those losses.