The Toronto Raptors faced a sizable early deficit. They trailed in the fourth quarter. And again in the first overtime. And again in the second overtime. Exhausted and on the brink, the reigning NBA champions rose to the moment. Next up: Game 7, for a spot in the Eastern Conference finals.

Playing on weary legs and with a gash on his chin that required three post-game stitches to close, Kyle Lowry backed his big behind into Boston's Kemba Walker with 11.7 seconds left to play before turning and hitting a jump shot while crashing to the floor.

Lowry's huge basket all but sealed the game on Wednesday, and he exhaled deeply as he walked back to the bench. His team and Toronto Raptors fans did too.

The six-time all-star had 33 points in 53 minutes, plus eight rebounds and six assists, in another monster performance, and the Raptors beat the Celtics 125-122 in double-overtime to even the series at 3-3, and force a Game 7 in the Eastern Conference semifinal.

"That's what great players do," coach Nick Nurse said. "That's what the tough players do and he is, man. He is a great one. He's fun to watch. He's the ultimate competitor. Toughness and he steps into it. He's not afraid of the moment. He made some big ones for sure. He played great." 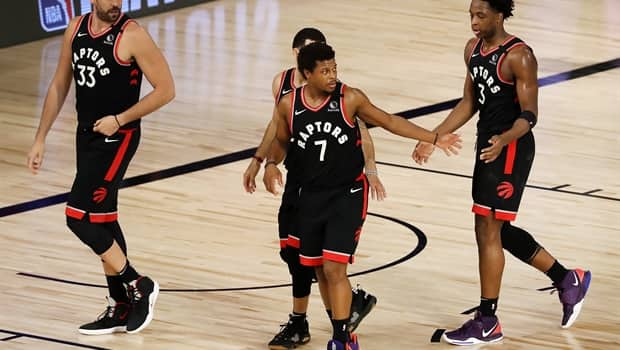 Game 7 is Friday, with the winner facing the Miami Heat in the Eastern Conference final at Walt Disney World. And after a game that took double overtime to decide, it might come down to who has the most left in the tank.

When told by ESPN he'd played 53 minutes, Lowry said laughing: "Damn, that's what it was? Ride 'em like Seabiscuit."

For one of the first times in the series though, Lowry had plenty of help. Norman Powell scored 23 points off the bench for the defending NBA champions and was outstanding in overtime. Fred VanVleet added 21 points, OG Anunoby and Serge Ibaka, who'd been questionable after spraining his ankle in Game 5, each finished with 13 points, while Pascal Siakam chipped in with 12.

The Raptors' cold shooting to end regulation forced the first overtime with the teams tied at 98-98.

Powell had a three-pointer and a pair of free throws in the first overtime, but missed a three attempt at the buzzer, forcing the second extra period with the score 106-106.

Dunks by Tatum and Daniel Theis in the second OT had Boston up by four when Lowry muscled to the basket to slice the difference to two. A crazy sequence that started with a Lowry steal finished with a pair of Powell free throws to even it up with 2:33 to play.

Anunoby connected from three to put the Raptors ahead for good, Powell had a steal and a running layup to give Toronto four points of breathing room.

Tatum then scored, but Lowry replied with the spectacular fadeaway to seal the win.

Tempers flared as the final buzzer sounded, prompting security people for both teams to step in.

"At the start of the playoffs, even before you would have thought if Boston and Toronto got on a collision course it was going to be a hell of a series," Nurse said.

"Game 7 to go to the Eastern Conference finals," VanVleet said. "All you can ask for is a chance." 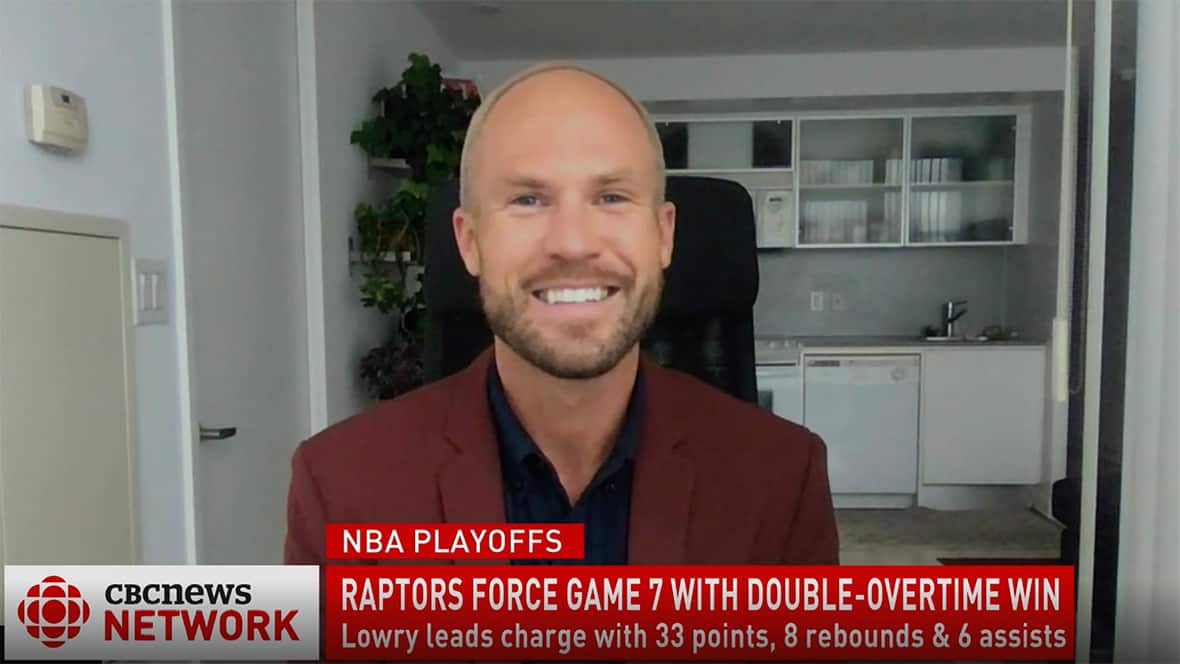 Devin Heroux on Raps: 'Lowry put this team on his back'

Lowry has been outstanding in this series, and his heroics Wednesday earned praise from all corners of social media — from Dwyane Wade to Magic Johnson to Prime Minister Justin Trudeau.

Johnson tweeted: "I love watching Kyle Lowry play! I call him the Little General because of his toughness, leadership, scoring ability, basketball IQ, and will to win."

Trudeau posted "That's what I'm talking about @Raptors. On to Game 7! #We the North"

Even retired Celtics great Paul Pierce, famous for his criticism of the Raptors in the past, posted: "Toronto showing why they were Champs wow Props to Kyle Lowry heart of a champ Boston gonna have to earn this."

The Raptors trailed by double digits in the first half, but their offence finally started rolling in the third quarter, sparked by Marc Gasol. The Spanish big man, who'd shaved his shaggy hair before the game, blocked Tatum, then knocked down consecutive three-pointers — his first points from behind the arc in the series.

"We love Marc and what he brings us. A passing big and a defending big, a tough guy, an IQ guy and he can score man," Nurse said. "He can shoot and he can space the floor for us. He just hasn't . . . nothing good has happened for the guy."

Gasol's long shots had the bench up celebrating.

"You can tell when something like that happens and their reaction, you can tell how much they love him and how much they care about him," Nurse said. "That just gave us all a little boost for the second half."

VanVleet scored nine straight points in the third quarter to give the Raptors their first lead since the 1-0 to start the game. Toronto would lead by as many as eight before taking a 81-77 edge into the fourth quarter.

Boston regained the lead after Tatum made a three with 8:22 to play, but Lowry replied with two buckets from long range and Toronto was back up by five.

The Raptors didn't score over the final 4:24 of regulation, and Theis scored on a layup and dunk to tie the game at 98-98 with two minutes to go. The Raptors' defence held strong over the final two minutes, and Anunoby hauled down a huge defensive rebound with 2.6 seconds left. Siakam's miss at the buzzer sent the game to OT.

Gasol's emergence — finally — was a great sign for Toronto. He and Siakam had struggled during the NBA's restart after the four-month COVID-19 layoff. His frustration was painfully clear early on Wednesday when he missed an easy lay-in. He hollered at himself in anger and tugged hard on his jersey. Subbed off for Ibaka just seven minutes in, he then left the bench area to gather himself.

Boston took Games 1 and 2 of the series, and the Raptors battled back to take the next two, sparked by Anunoby's astonishing buzzer-beater on a long pass from Lowry with 0.5 seconds to play in Game 3.

But the Celtics regained the momentum with a dominant Game 5 victory, pouncing on a Raptors team in one of Toronto's worst games of the season.

The Raptors came out with urgency on Wednesday, but took a while to find their offensive rhythm and the Celtics led just 25-21 to start the second.

Boston stretched its lead to 12 in the second, but Ibaka connected on three consecutive three-pointers to pull the Raptors back to within five. The Celtics led 52-48 at halftime.