Isaiah Thomas scored 19 of his 44 points in the final quarter to lift the Boston Celtics over the Toronto Raptors 109-104 on Wednesday night in a showdown for first place in the Atlantic Division.

Toronto has now lost 7 of past 9 games 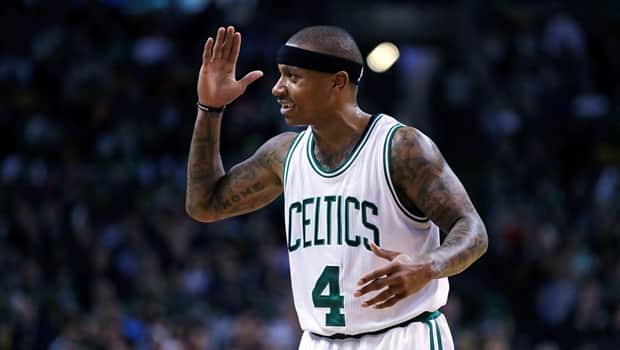 Thomas scored 19 of his 44 points in the final quarter to lift the Boston Celtics over the Toronto Raptors 109-104 on Wednesday night in a showdown for first place in the Atlantic Division.

When Thomas hits a shot in the fourth now, his teammates and many in the stands look down at their wrists, simulating looking at a watch to signal that it's Thomas' time.

"I just did it one game and it kept going," he said. "I've got teammates, the fans, signs, everybody in social media is saying: 'You know what time it is."'

In his last game, Thomas had 24 in the fourth in a victory over Detroit. He's had four games with 20 or more in the fourth. No other player in the league entered Wednesday with more than one.

'You have to trap him'

"You have to trap him and get the ball out of his hands," Toronto guard Kyle Lowry said. "He got three wide-open looks in the fourth. That can't happen."

It was the fifth straight win for Boston, which moved 1 1/2 games ahead of the Raptors in the division and holds the Eastern Conference's No. 2 seed.

Jae Crowder scored 14 points for the Celtics and Al Horford had 11. Thomas had 18 of Boston's final 23 points.

"He's more patient than ever," Sullinger said. "He runs through the offence slowly and finds a way to score."

In a final quarter that rivaled playoff intensity, Celtics forward Jaylen Brown was fouled on a breakaway attempt and walked over and had words with Lowry before a few others player joined in and had to be separated by the officials. Boston's Terry Rozier and the Raptors' DeMarre Carroll were each given a technical foul.