Pascal Siakam had 24 points and nine rebounds, while Kyle Lowry became Toronto's all-time leader in assists as the Raptors stretched their win streak to eight games with a 130-114 win over the Atlanta Hawks on Tuesday.

Vince Carter was there to witness Lowry's historical feat Tuesday night, while Lowry played with Kobe Bryant in his heart.

Lowry doled out 11 assists to pass Jose Calderon as the franchise assists leader and the Raptors beat the beleaguered Atlanta Hawks 130-114 on an emotional night to stretch their win streak to eight games.

"It was awesome to be able to get it here tonight, in front of the home crowd, in front of Vince," Lowry said. "The longevity that I've been here, and to pass a guy like Jose, one of the best point guards in franchise history and one of the greats in European basketball... means a lot."

Serge Ibaka had 24 points and 10 rebounds for the Raptors (33-14), while Pascal Siakam had 24 points and nine boards. Fred VanVleet finished with 19 points, while Terence Davis finished with 15, Lowry had 12, and Marc Gasol had 10 points before leaving the game in the third quarter with tightness in his left hamstring. The Spanish big man missed 12 games with an injury to the same hamstring earlier this season. 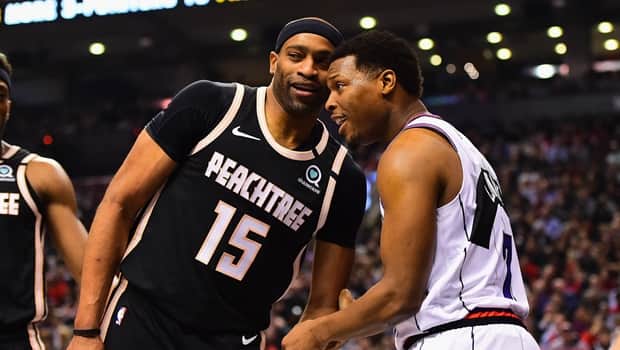 But on a night that marked both the Raptors' first home game since the shocking death of Bryant, and Carter's penultimate game in Toronto before he retires, the story of the game wasn't written in the box score.

The night began with a poignant video tribute to Bryant and his 13-year-old daughter Gianna, herself a blossoming basketball star, who died in a helicopter crash along with seven others. It was followed by 24 seconds of silence — a nod to Bryant's jersey number — and then a Scotiabank Arena crowd dotted with purple and gold Bryant jerseys erupted into chants of "Ko-be! Ko-be!"

"It's been tough man, it's been tough, and whenever you turn the news on, that's how you know the man was a world icon," said Lowry, who was close with Bryant. "It's hard to look at it and it's hard to know what his family is going through. Every time you think about it you get sad." 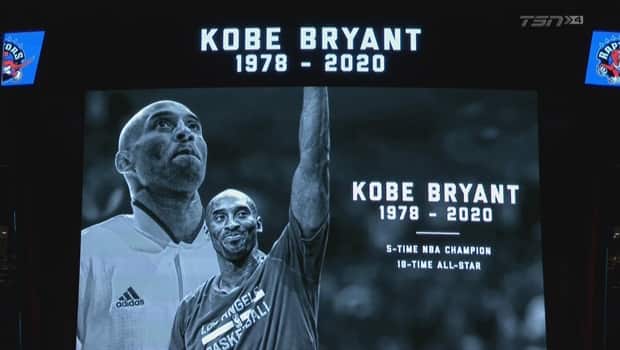 10 months agoVideo
2:45
A video tribute was played for the Lakers' star before fans and players observed a moment of silence. 2:45

Then the Raptors, who moved into second in the Eastern Conference with the win, went to work against a struggling Hawks team that's last in the East. They never trailed and parlayed their early double-digit lead into 18 points by midway through the third quarter. They led 97-83 to start the fourth.

The Raptors stretched the gap to 28 in the final frame, while holding the Hawks scoreless until Kevin Huerter connected on a three-pointer 3:59 into the quarter.

Lowry's dish to Davis on the Raptors' next possession broke Calderon's assist record (3,770), and prompted a bench celebration that included a wildly-dancing Siakam. Carter met Lowry at halfcourt, wrapping him in a huge hug.

"[Vince] didn't start the organization but he kind of put it on the map and continued to make this thing grow," Lowry said. "He's always been a big supporter of mine and the Raptors. He's just one of the greats . . . and to do it in front of him made it even more special."

Calderon tweeted a video message to Lowry saying: "If somebody had to do it, I'm pretty happy it is you. Enjoy this moment and many more."

Carter, who had 10 points on the night, also had kind words for Lowry.

"He's very crafty, he's very smart. He's been around a while, he's seen a lot," Carter said. "His basketball IQ is up there with some of the best in my opinion."

The 43-year-old former longtime Raptor, who recently became the first NBAer to play in games spanning four decades, received a standing ovation during a video tribute to end the first quarter. On the Hawks' first possession to start the second, he hit a moon shot over OG Anunoby, and then grinned like a child when the ball dropped through the hoop.

The Raptors wore their purple-striped throwback jerseys, which Carter once wore when it was simply their jersey. He'll play his final game in Toronto when the Hawks are in town on April 10.

Both the Raptors and Hawks had played Sunday in the hours after Bryant's death. Both games started with teams taking 24-second shot clock violations.

"We've got to kind of move on, and we'll pay our respects, which is what we should do. We send up our prayers, we keep our thoughts and our hearts open, and our minds open, and then we've got to go play the best we can. And that's all I guess we can do." 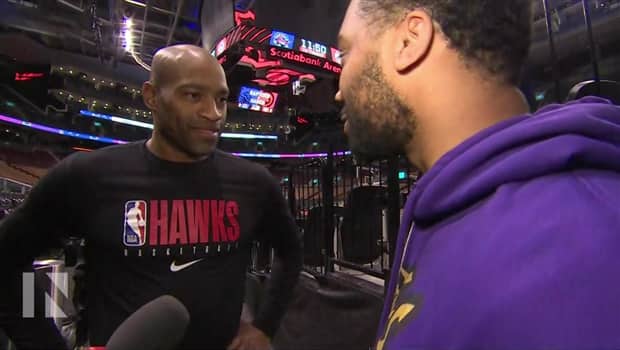 Vince Carter superfan meets his idol, with help and hindrance from CBC

10 months agoVideo
1:52
Herman Hodges missed a chance to meet Carter last year while being interviewed by CBC's Greg Ross. So Ross made it up to Hodges in a big way. 1:52

The Raptors took a double-digit lead in the first quarter on a three-pointer by Siakam, and went into the second ahead 33-23.

Davis's running three capped a 10-0 run that stretched the Raptors' lead to 17. De'Andre Hunter drilled a three with Lowry in his face as the buzzer sounded to end the first half, slicing Toronto's lead to 68-56 at the break.

The Raptors are in Cleveland on Thursday and Detroit on Friday.