How do Raptors stop Stephen Curry? Hit him where it hurts, says Fred VanVleet

Toronto Raptors guard Fred VanVleet says there's no player in the NBA who puts more pressure on opposing defences from the perimeter than Golden State's Stephen Curry. And one way to stop him, VanVleet says, is trying to get into Curry's grill.

'Nobody really wants to banged on, touched, held and grabbed,' guard says of Warriors star

Guard Fred VanVleet and the Toronto Raptors aren't happy with just being in the NBA Finals.

Toronto squares off against the Golden State Warriors in the league final, which opens Thursday night at Scotiabank Arena. The Raptors are making their first NBA championship appearance versus a Warriors squad in its fifth straight final and chasing a fourth title over that span.

"We're happy to be taking that next step but you want to win a championship and you want to win the whole thing." VanVleet told reporters Monday. "It's not about just making it to the final.

"We're not satisfied, we're not happy to be here. We're really hungry and we want to go out here and have a chance to win it. We've earned it, we deserve it and now it's just a matter of going out there and having to perform at a high level on the biggest stage."

The Warriors, led by smooth-shooting guard Stephen Curry, have been the toast of the NBA since winning their first title in 40 years 2015. The only blemish on their previous four championship appearances was losing in seven games to LeBron James and the Cleveland Cavaliers in 2016 despite holding a 3-1 series lead.

Toronto dispatched the Bucks in six games in the East final, clinching the series with a 100-94 home victory Saturday night.

Toronto also swept the regular-season series with Golden State 2-0, but the Warriors reached the final with a 4-0 sweep of the Portland Trail Blazers in the Western Conference final. Golden State will be minus forward Kevin Durant (calf) for Thursday's contest.

And that's a big loss for Golden State as Durant is averaging a playoff-leading 34.2 points per game through 11 post-season contests.

Curry has appeared in all 16 of Golden State's playoff games, averaging 27.3 points per game. What makes Curry tough to defend is his range — he's a threat to score from well beyond the three-point arc.

VanVleet said there's no player in the NBA who puts more pressure on opposing defences from the perimeter than Curry.

"I don't even know if there's a close second," he said. "Obviously from a guard being able to shoot that far out just opens the floor up so much.

"He's just a different kind of player, he changes the entire dynamic of a team . . . of whatever defence you hope to put out there. As a guy who's going to have to chase him around and make it hard on him, obviously there's not going to be any time to relax or take plays off. At the end of the day just go out there and try to make it tough on him and challenge him as best I can."

And one way to do that, VanVleet said, is trying to get into Curry's grill.

"Any player in the NBA likes space, freedom, movement," VanVleet said. "Nobody really wants to banged on, touched, held and grabbed.

"You just got to try to be as physical as you can, slow him down and keep the contest. A guy like that, who is a really good shooter against contest, you can't really give him free looks and let him feel free and easy. 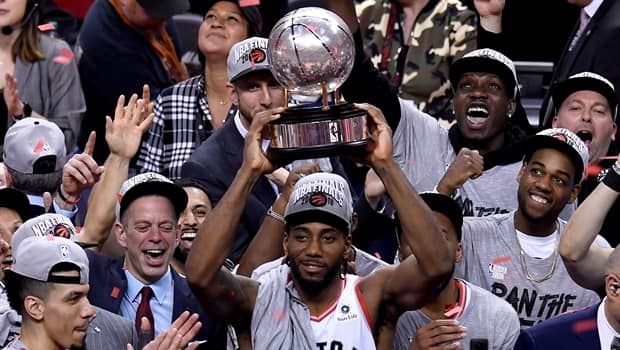 But Leonard, is also a defensive presence, averaging 6.7 rebounds and 1.6 steals per game.

"An offensive scorer who's been scoring at that clip but can still be a dominant defensive player is pretty special," VanVleet said. "That's how you get yourself into some of those conversations as one of the best players to ever lace them up.

"We understand what Kawhi brings to the table and obviously we appreciate him and are glad he's on our side. We're going to need him at a high level this series."