The Toronto Raptors selected Indiana forward OG Anunoby with the No. 23 pick in the NBA draft, adding an agile, physical player with the length of a centre. 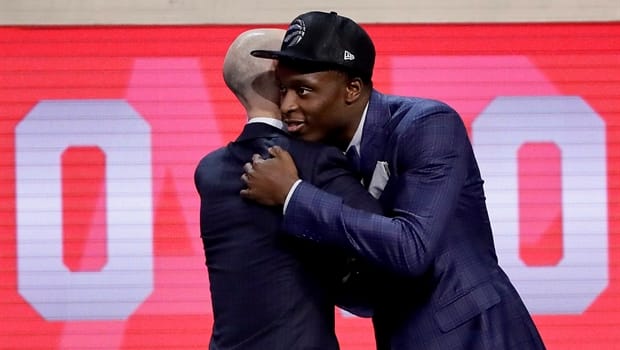 3 years ago
1:05
The Toronto Raptors selected Indiana forward OG Anunoby with the No. 23 pick in the NBA draft, adding an agile, physical player with the length of a centre. 1:05

The Toronto Raptors believe they landed one of the most versatile defenders in Thursday night's NBA draft when injured forward OG Anunoby fell to No. 23.

"Obviously if he doesn't have that injury, I don't think we have a shot," said Raptors president Masai Ujiri.

The six-foot-eight, athletic combo forward averaged 11.1 points and 5.4 rebounds in his sophomore season at Indiana, but his college career was cut short when he tore his ACL in January.

"There were a lot of teams right behind us that were salivating to get him and we were lucky he fell to us at 23," said Raptors coach Dwane Casey.

"He can guard one through five, easily. He's a P.J. Tucker clone, practically. That's something that gives us some toughness and ability to switch things defensively. His size and strength and athleticism is a huge plus for us."

Anunoby met with the Raptors in Toronto a couple of days ago, and was in Brooklyn for draft night, dressed in a smart blue plaid suit and blue bow tie.

When asked what he could bring to a Toronto team that made the playoffs for a fourth consecutive season, and is perhaps a piece or two away from an Eastern Conference championship, he said "I bring a versatile wing defender that can defend multiple positions, and on offence hit open shots, cut to the basket, and then just create havoc on defence."

Anunoby, who boasts an impressive seven-foot-two wingspan, played just 16 games this past season, and the injury added plenty of mystery around Anunoby's stock heading into the draft.

"He's just raw offensively. The injury is the biggest issue to me and then just how good you think he can be offensively. Is he going to come around and be an excellent all-around player? I think he's very valuable just for the fact that he can come in and be a really tall, long versatile defender," said ESPN draft guru Jay Bilas during a conference call earlier this week.

The injury prevented him from participating in any pre-draft workouts, but said his rehabilitation is "two months ahead of schedule.

"I'm starting to do a lot more on the court, I started running," Anunoby said. "I should be back full go [in] October, November."

Casey said he'll head to Los Angeles in the next couple of days to work with Raptors' director of sports science Alex McKechnie.

Brooks drafted in 2nd round

Dillon Brooks of Mississauga, Ont., a forward out of the University of Oregon, was selected 45th overall by the Houston Rockets, then traded to the Memphis Grizzlies. He was the only Canadian to be picked in this year's draft.

The 19-year-old Anunoby — whose full first name is Ogugua — was born in London, but moved to Missouri at the age of four. His older brother Chigbo is a defensive tackle who has been signed by several NFL teams, including Cleveland and Minnesota, but hasn't yet played a regular-season game.

Anunoby confirmed that he would continue to wear his trademark short shorts next season in Toronto.

Brooks, meanwhile, averaged 16.1 points, 3.2 rebounds and 2.7 assists en route to earning Pac-12 player of the year honours this past season.