A rattled DeMar DeRozan, another sizzling three-point shooting night from Cleveland, and the Toronto Raptors dropped a 125-103 decision to the reigning NBA champion Cavaliers. 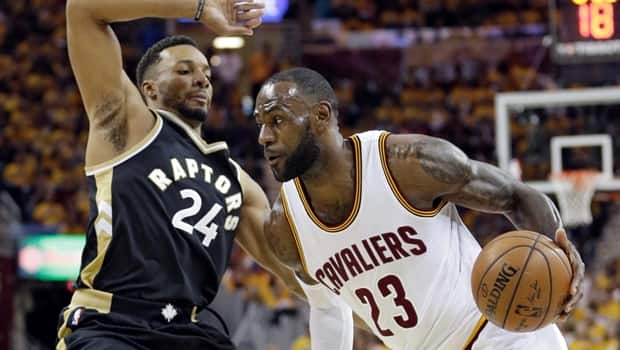 His pride was surely stinging as much as his ankle.

A rattled DeMar DeRozan, another sizzling three-point shooting night for Cleveland, and a sprained ankle for Lowry. And now the Raptors head back home to Toronto down 2-0 in their best-of-seven Eastern Conference semifinal series after a 125-103 rout by the Cavaliers.

"They're defending champs, and they're looking. . . you know. . . that's what they look like right now," a brooding Lowry said. "They're playing extremely well."

Jonas Valanciunas had 23 points to top Toronto, while Cory Joseph had 22, Lowry finished with 20, and Serge Ibaka added 16 points.

DeRozan finished with just five points, on 2 of 11 shooting.

"It sucks. It sucks," DeRozan said. "To lose like we did, to play like I did, it sucks. It's frustrating. Now just having time, having to wait until Friday night to redeem yourself."

LeBron James had 39 points, passing Kareem Abdul-Jabbar for second all-time in post-season scoring, and now trails only Michael Jordan. Kyrie Irving added 22 for the Cavs, who were red-hot from long range, making 18 of their 33 three-point attempts to Toronto's five. Cleveland's 125 points were a franchise post-season high.

In the shell-shocked moments after the rout, the Raptors said they can take some measure of comfort in last year's Eastern Conference that saw them rally to win two at home after dropping two in Cleveland.

"We're in the same place we were in last year," coach Dwane Casey said. "Until a team wins on another team's court, it's not a series. They played well, we shake their hands. . . But we haven't scratched the surface of where we can go. We take our butt-whooping and go home."

Two nights after dropping the series opener 116-105, Casey had predicted more fight from his players in Game 2. They traditionally rebound well after "we get punched in the mouth," he'd said.

But James and the Cavs threw the first swing. The Raptors looked scattered and scared, digging themselves an early 10-point deficit. They managed to cut the Cavs' lead to single digits in the second quarter, but by the time Irving scored on a driving bank shot late in the third quarter, Cleveland waltzed into the fourth with a 99-73 advantage.

"Yeah, we have home in front of us. We have to go home and I don't know, fix something," said a shell-shocked Valanciunas. "Or do something better. Play better. That's what we need to do. How to do that, I don't know."

There were some tense moments early in the second half when Norman Powell crashed into Lowry's leg in a collision under the net. Lowry was down on the court for several minutes before limping to the locker-room. He returned to play most of the third quarter, but didn't return for the fourth.

Wrapped up by double teams all night long, DeRozan, who tugged his jersey over his face in frustration at times, scored his first field goal 37 seconds into the fourth quarter. A Cleveland fan stood and gave him a mocking slow clap.

"They do a great job of protecting the paint and also getting out to our shooters at the same time," said DeRozan, who's scored fewer than 10 points five times in the post-season — the Raptors losing all five games. "I'm just going to go out there and try to make the right passes out of the double, trust my teammates. We missed a lot of shots. I couldn't find a rhythm with all the doubling."

The Cavs twisted the knife in the fourth quarter, amassing a whopping 30-point lead with 9:32 to play when Channing Frye connected on one of his five three-pointers of the night. As the final couple of ugly minutes ticked down, many fans had already left Quicken Loans Arena, which was a raucous sea of yellow T-shirts and white rally towels. A photo of Toronto rapper Drake was shown on the big screen during Raptors' free throws.

The Cavs shot 55 per cent on the night to the Raptors' 47 per cent. Toronto went just 5 of 17 from three-point range.

Last year's post-season, the Cavs routed Toronto in Games 1 and 2 by a combined 50 points. The Raptors rebounded to take Games 3 and 4, eventually going down in six games.

Can the Cavs avoid a repeat of last season?

"Only time will tell, I'm not psychic," James said. "I don't know what will happen in Game 3 or 4, all I know is I can prepare my guys, prepare myself, the coaching staff is going to prepare us and its up to us to go out and do it."

Ibaka got off to another slow start, missing his only four shots of the first quarter. The Raptors were clobbered 13-2 on the boards in the frame, and the Cavs took a 34-22 lead into the second quarter.

The Raptors had a mini 10-5 run midway through the second to pull to within nine points, but the Cavs responded with back-to-back threes and they took a 62-48 lead — identical to Monday's Game 1 — into halftime.

Game 4 is Sunday in Toronto. Game 5, if necessary, would be Tuesday in Cleveland.