Raptors falter in 4th as Bucks come back to win opener

Brook Lopez scored 29 points, while Giannis Antetokounmpo added 24 points and 14 rebounds and the Milwaukee Bucks beat the Toronto Raptors 108-100 in Game 1 of the Eastern Conference finals on Wednesday.

Down for most of the game, clearly rusty at times after nearly a full week off, the Milwaukee Bucks looked very much like a team in trouble.

Until the fourth quarter.

The team with the NBA's best record this season found its stride at the perfect time.

Brook Lopez scored 13 of his career playoff-high 29 points in the fourth quarter, Giannis Antetokounmpo added 24 points and the Bucks closed the game on a 10-0 run to beat the Toronto Raptors 108-100 in Game 1 of the Eastern Conference finals on Wednesday night.

Milwaukee forced Toronto to miss its final eight shots and outscored the Raptors 32-17 in the fourth.

WATCH | Brook and the Bucks steal show in Game 1: 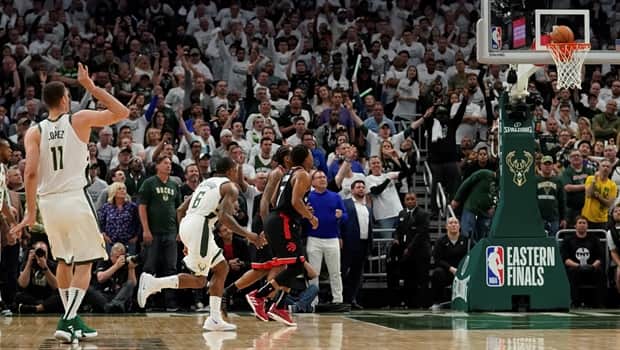 Game Wrap: Brook and the Bucks steal show in Game 1

"I think it speaks a little bit to the character of the group," Bucks coach Mike Budenholzer said. "They just stick with it. I think it's become a little bit of a theme in the playoffs: I think eventually, hopefully, we feel like if we stick with what we're doing good things will happen for us."

Lopez had a dunk with 2:20 left to put the Bucks ahead for good, added a 3-pointer on the next Milwaukee possession to push the lead to four and the Bucks — after trailing for the overwhelming majority of the game — did just enough in the final minutes to grab the series lead.

"I think this game definitely made us better," Antetokounmpo said.

Malcolm Brogdon scored 15 and Nikola Mirotic had 13 for Milwaukee, which closed the game on a 10-0 run.

"We just did a great job of sticking with what we've been doing all postseason long," Lopez said.

"Fourth quarter killed us, 32-17," Lowry said. "They outplayed us in that fourth quarter. They got a little bit more aggressive. They made some big shots, made some big plays. It sucks when you lose like that. But we had our chance and we've got to learn from it."

Lopez added 11 rebounds for the Bucks, who had three players post double-doubles. Antetokounmpo had 14 rebounds and Khris Middleton finished with 11 points and 10 rebounds for Milwaukee, which is now 9-1 in this postseason.

The Bucks trailed for 37 of the game's 48 minutes.

Didn't matter. They stayed just close enough until they could finish with a serious kick.

"The way guys competed and just got after it ... stands out to me," Budenholzer said.

Pascal Siakam scored 15 for Toronto, including a 3-pointer over Antetokounmpo to end the third quarter and give the Raptors a seven-point lead with 12 minutes left.

It unraveled quickly from there. And now the Raptors, who came in on the high of winning a second-round Game 7 on a buzzer-beater by Leonard, have two days to regroup.

"The game is over," Toronto's Marc Gasol said. "We got to look back at it and learn but we can't think too much about it. You come out Game 2 and try to win. You can't replay this one."

With the chants of Milwaukee's motto — "Fear the deer! Fear the deer!" — bouncing throughout the building, the Bucks predictably came out flying.

The flurry was brief.

The Bucks missed seven consecutive shots, the Raptors made four 3-pointers in a span of three minutes, and that all helped become a 16-0 run by Toronto that turned an early 8-3 deficit into a 19-8 edge. The lead got as big as 13 later in the quarter on a fadeaway jumper by Leonard, and the Raptors held the lead the rest of the half.

Milwaukee had a chance to take its first lead since the opening minutes when Antetokounmpo went to the line for a pair of free throws with 8:17 left in the third and the Bucks down by one. He missed both and the Raptors peeled off the next nine points to rebuild a 10-point lead again.

But Toronto shot 5 for 22 in the fourth, the Bucks finally reclaimed the lead, and the Raptors' chance to steal home-court went awry.

"We gave ourselves a chance to win on the road in an Eastern Conference final," Raptors coach Nick Nurse said. "And it didn't turn out."