DeMar DeRozan and newcomer Serge Ibaka continue to propel the Toronto Raptors back up the Eastern Conference standings. 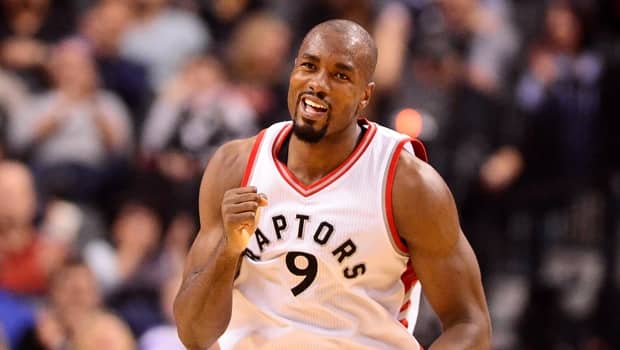 4 years ago
1:50
DeMar DeRozan scored 33 points, and newcomer Serge Ibaka had 18 points and 10 rebounds as the Raptors beat the Portland Trail Blazers 112-106 for their third straight victory. 1:50

Two games since they rejigged their roster, the Toronto Raptors are marching back up the Eastern Conference standings — despite the absence of all-star guard Kyle Lowry.

DeMar DeRozan scored 33 points, and newcomer Serge Ibaka had 18 points and 10 rebounds as the Raptors beat the Portland Trail Blazers 112-106 for their third straight victory.

"We still don't know most of the plays. We're just out there playing for the most part," said P.J. Tucker, who along with Ibaka was acquired before last Thursday's trade deadline.

Jonas Valanciunas added 15 points and seven boards for Toronto (35-24), while Cory Joseph, who started at point guard in place of an injured Lowry, finished with 14 points and six assists and Delon Wright chipped in with 11 points.

Fighting to top of East

DeRozan, who's scored 76 points over the past two games, turned the spotlight on the newcomers in the post-game locker-room.

"Oh man, defensively altering and blocking shots, able to switch out on wings, point guards and able to knock down shots," DeRozan said of Ibaka. "He takes a lot of pressure off, teams just understanding you've got to pick and choose. We have another weapon out there that teams have to worry about.

"It's veteran guys that know how to play the game, keep it simple, go out there and play hard on the defensive end. And as long as we get stops the coaches give us the freedom to just play."

The Raptors, who'd beaten the Trail Blazers 95-91 in Portland on Boxing Day, trailed by 12 points in the first half of the back-and-forth affair, and held a narrow 82-80 advantage heading into the fourth quarter.

Wright scored on back-to-back driving layups to give the Raptors a seven-point lead midway through the fourth, but Portland chipped away at the difference, and when Lillard scored with 1:42 to play, it cut the Raptors' lead to just three. But DeRozan, who'd scored a career-high 43 points two nights earlier in the team's 107-97 win over Boston, replied with five straight points to give Toronto a comfortable six-point cushion with 23 seconds to play.

Tucker grinned when asked about the Raptors' solid closing unit.

"Yeah, it's unbelievable," said Tucker, wearing a gold chain as thick as a snake. "I really like it, especially with me and [DeMarre Carroll] switching all the stuff. We're making them take tough contested twos and then being able to push back at the other end with Serge at [centre] being able to take the rim, it's a pretty good lineup."

Lowry sat for the second straight game with a sore right wrist. Tests revealed no significant damage to the wrist, and Lowry is listed as day to day.

"Not having our queen bee in there and our top guy to hand the ball off to offensively, defensively, three-point shooting, we miss that part of it," Casey said of Lowry's absence.

The three-time all-star guard was animated and vocal throughout the game, jumping up to join the coaches huddles during timeouts.

Casey jokingly rolled his eyes when asked about Coach Lowry.

"I think it's great that he's into it like that," Casey said. "Most guys go down at end of the bench and sit there, eat popcorn, hide popcorn under their seat and everything. "We're gonna put him on the coaching staff payroll. He's got a lot of good stuff, talking to the new guys, telling them what to do which is great.

"But I'd much rather have him out there on the floor with No. 7 on rather than with the coaching staff. . . he knows the offence better than probably some of our coaches. His enthusiasm is infectious and it's one of those things where it rubs off on everybody, the intensity he has in those huddles."