In his second year on the job, Nick Nurse of the Toronto Raptors has been named the NBA coach of the year after leading the team to a 46-18 record before the regular-season was suspended March 11 due to the COVID-19 pandemic.

Toronto Raptors coach Nick Nurse has been named the NBA coach of the year.

Nurse, who has the Raptors on the verge of the second round of the playoffs, was a runaway winner, receiving 90 first-place votes from a panel of 100 sportswriters and broadcasters. He finished with 470 points.

Milwaukee coach Mike Budenholzer was second after leading the Bucks to the best record in the suspended season, earning 147 points. Oklahoma City's Billy Donovan (134) was third.

Raptors guard Kyle Lowry presented Nurse with the Red Auerbach Trophy while the coach was interviewed on TNT's pre-game show before the Bucks faced the Orlando Magic at the NBA's campus at Walt Disney World near Orlando, Fla. 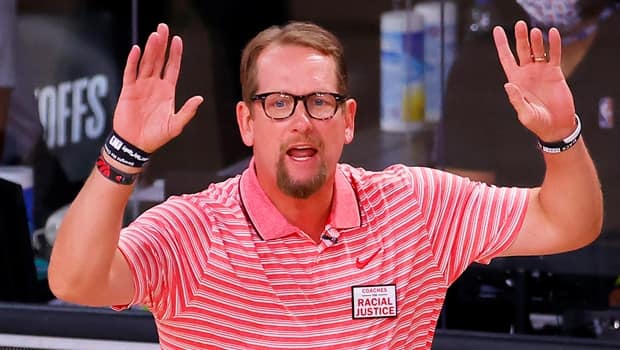 Raptors present Nick Nurse with his Coach of the Year award

"I didn't really figure it out until coach Chandlee appeared on the screen," Nurse said in a videoconference from Lake Buena Vista, Fla., Saturday. "[The panellists] showed my high school team photo, and they joke around a lot and kid a lot, and I thought that's where we were still going. But when coach Chandlee had a message for me I guess that kind of hit home that that's what was going to happen."

Nurse is in his second season as Raptors head coach. The club went 53-19 in the pandemic-shortened 2019-20 regular season and posted a franchise-best .736 winning percentage.

Toronto won its first NBA title last season in Nurse's first year as an NBA head coach, with superstar Kawhi Leonard leading the way. Leonard left for the Los Angeles Clippers in free agency shortly after Toronto's title run, but under Nurse the Raptors haven't missed a beat without him.

The Raptors went 7-1 in the seeding games when the NBA resumed play following a months-long hiatus due to the COVID-19 pandemic. They will look for their first ever playoff sweep on Sunday, when they take a 3-0 lead into their series with the Brooklyn Nets.

Nurse is 111-43 in two seasons. He has more than validated the Raptors' decision to fire Dwane Casey in 2018, even though Casey had been coach of the year that season after guiding Toronto to a 59-23 record.

But the Raptors kept getting overrun by LeBron James and Cleveland in the playoffs. So team president Masai Ujiri decided to part ways with Casey, the franchise's career leader in victories, and promote Nurse, who had been an assistant for five years.

"I think I knew what the job was when I got it," Nurse said. "The number of wins in the regular season had become pretty much irrelevant. It was going to be a building process to see if we could advance in the post season, and from Day 1 that was the message.

"Now that's not always easy to do because the pressure to win each and every night in this league is real. But we were trying to build a little bit, but we were always trying to focus on playing our best in the playoffs. Because, rightly or wrongly, that's how our organization was being judged at the moment."

Nurse has already nearly caught Casey for the Raptors' record for playoff wins by going 19-8 over the last two seasons. Casey was 21-30.

Nurse has been praised for his ability to adjust on the fly and implement oddball defensive schemes that deliver results. His use of the box-and-one scheme, rarely seen at the professional level, helped contain Golden State sharpshooter Stephen Curry at last year's NBA Finals.

Nurse credits Ujiri and general manager Bobby Webster for letting him coach outside the box.

"Masai and Bobby as the leadership of the organization wanted me to go out on a limb and try to shake things up," Nurse said. "So that helps you to be able to go ahead and do that."

Sam Mitchell is the only other Raptors coach to win the award, doing so in 2007.