The Raptors (49-18) improved to 3-0 in the NBA restart at the Walt Disney World bubble, moved closer to clinching second in the Eastern Conference, and swept the season series (4-0) against Orlando.

A big part of the Toronto Raptors' blueprint is that a lack of effort on the defensive end will land you on the bench, says Marc Gasol.

"You'll stick out like a sore thumb," said Fred VanVleet.

The Raptors showed again Wednesday why they're the best defensive team in the NBA, with a 109-99 victory over the Orlando Magic that boosted their win streak to seven consecutive games.

"It's a matter of will, right?" Gasol said. "In our locker room, if you don't have the will or the discipline to play defence, it is going to be really hard for you to see the floor, and that gives the coaches a lot of credit, right? They have high standards defensively, and I think that's what separates the good teams from the great teams. I think that's who we are." 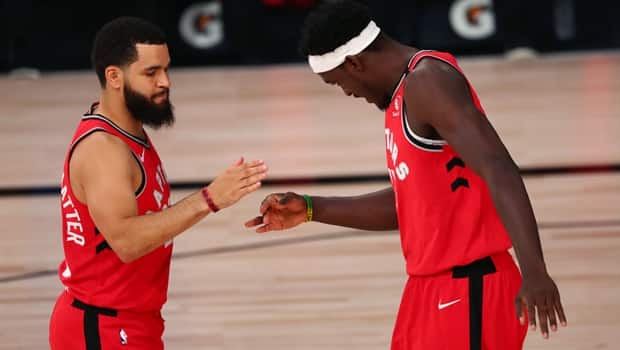 Two nights after his career-high 36 points versus Miami, VanVleet had 21 points and 10 assists top the Raptors (49-18), who improved to 3-0 in the NBA restart at the Walt Disney World bubble, inching closer to clinching second in the Eastern Conference. They also completed a four-game season sweep of Orlando.

Kyle Lowry had a rough 2-for-9 shooting night, but narrowly missed a triple double with eight points, nine rebounds and 10 assists.

But it was the Raptors' defensive effort that earned them the win. They held Orlando to 0-for-9 from three-point range in the first quarter, en route to building a 24-point first-half lead.

"I think it just starts from the top down, obviously Nick [Nurse, head coach] sets the tone, and then it's just a collection of what kind of guys you've got," VanVleet said. "What is your character like? Do you have defensive-minded guys? Do you have guys who are pissed off when they get scored on?

"That's kind of the beginning of it, and then it gets to the point once you've got enough of that, you look bad when you don't play defence. Like you stick out like a sore thumb . . . you can tell when a guy's not on the same page as everybody else, it looks bad, and guys feel that, and you don't want to be that guy ever on the court."

Evan Fournier and former Raptor Terrence Ross had 15 points apiece to lead the Magic (32-37), who lost Jonathan Isaac for the rest of the season when he tore his ACL against Sacramento.

Far more aggressive after the halftime break, the Magic sliced the difference to just seven points early in the fourth quarter.

Orlando's burst was short-lived and by the time Siakam connected from long distance with 3:54 to play, the Raptors were back up by 15.

Some sloppy play down the stretch by Toronto allowed Orlando to get within nine, but that was as close as the Magic would come.

Nurse said the Raptors enjoy playing defence, which can't be said for all NBA teams.

"They pay attention to the game plans, they're basketball guys, they watch the other teams, they study them, they like stopping them, it's kind of an interesting thing that they got going."

The Raptors knocked off Orlando, which could have clinched a playoff spot with a win Wednesday, in the first round of the post-season last year. Toronto lost the series opener and rebounded to win four straight in what Nurse has credited as perhaps the defining stretch of their historic championship run.

The Raptors could face the Magic in the playoffs again in Orlando's backyard. Toronto would technically be the home team, and while a fanless arena in the NBA's bubble might not seem like much of a home-court advantage, Nurse isn't so sure.

Nurse said the NBA has been tweaking the in-game experience, and he likes the results.

"They're learning things about how to put the game on in this setting . . . and who knows what it'll evolve to here two months from now. So I don't want to discount the home court thing quite yet," Nurse said before tipoff.

On Wednesday, Gasol got it going early, spinning to the hoop for the game's first basket and then scoring six of the Raptors' first eight points. A three-pointer by Powell late in the first quarter put Toronto up by 16, and the Raptors led 26-11 heading into the second.

The Raptors maintained a double-digit advantage for most of the second quarter, and when Anunoby drove to the basket late in the frame it put Toronto up by 23 points. A Siakam free throw made it a 24-point lead, and the Raptors went into the halftime break up 55-35.

Looking more like a team fighting for a playoff spot, the Magic came out of the break with a 12-2 run capped by a Ross three-pointer that pulled Orlando to within 10. Wes Iwundu's three sliced the difference to just seven late in the quarter, and Toronto led 78-68 with one quarter to play.

The Raptors play the Boston Celtics on Friday in their fourth of eight seeding-round games.