Trade for Harden? How Raptors could respond if season heads further south

The Raptors are 1-6. More stumbles on the current west-coast road trip could put Toronto in a hole 10 games into the 72-game season. Perhaps this just isn't the Raptors' season. If that is indeed the case, what should they do?

After 1-6 start, Toronto may no longer be a contender to win NBA title

It's safe to say much has changed since the Larry O'Brien Trophy travelled north of the border.

Three of Toronto's five starters from that team, Kawhi Leonard, Danny Green and Marc Gasol, plus one key bench piece, Serge Ibaka, all left for Los Angeles. The title defence season ended in a seven-game, second-round loss to the Boston Celtics. The Raptors haven't played a game in Toronto since March, and now their home is Tampa Bay.

All of which is to say: the Raptors are no longer the pre-pandemic, championship Raptors. Perhaps expectations should change.

Monday night's blowout loss to the Celtics laid it bare: another blown double-digit lead, the Raptors' fifth of the season after losing just four times like that last season. Some flashes from Pascal Siakam, but nowhere near his all-NBA form. No signs of Aron Baynes and Alex Len coming close to replacing Gasol and Ibaka's production. A general lack of shot-making.

"We gotta do this ourselves and probably do a little soul-searching and look ourselves in the mirror and ask what each individual could do better to help contribute to the team and go out there and figure out ways to win," Fred VanVleet said after the game. 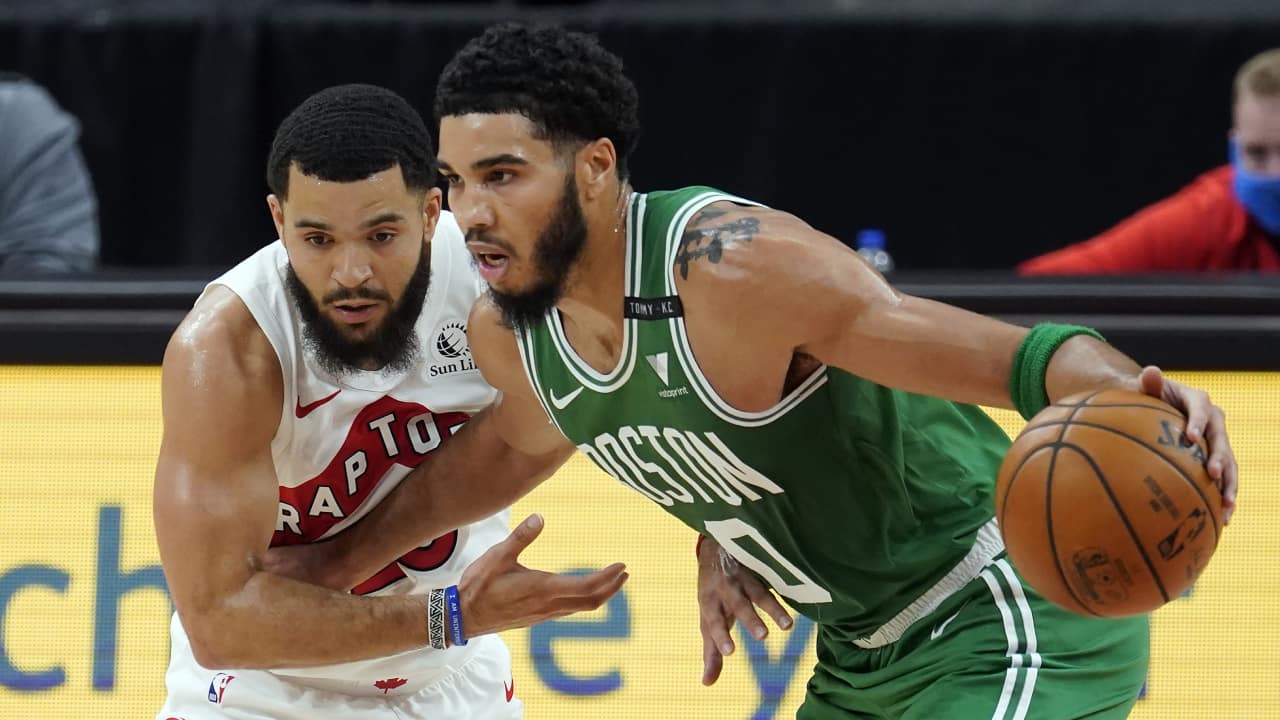 Tatum is too much for Raptors in Celtics win

The loss to the Celtics was followed by a more spirited effort against the Suns on Wednesday, but yet another defeat.

The Raptors are now 1-6 on the season and in the midst of a four-game west-coast road trip, which never makes for an easy swing.

More stumbles in the pacific time zone could put Toronto in a serious hole 10 games into the shortened 72-game season.

Perhaps, given everything, this just isn't the Raptors' season. If that is indeed the case, what should they do?

This section was originally titled "blow it up," but the truth is the Raptors don't have much to sell off besides the greatest player in franchise history.

In the last year of his contract, Lowry's value may be somewhat limited, though the Raptors would likely enter a seller's market due to a lack of tanking teams and the ease of the point guard's fit on any contender.

A potential return would likely include a first-round pick and a prospect of decent value, helping augment the Raptors' emerging nucleus of VanVleet, Siakam and OG Anunoby, all of whom are locked into the team through 2022-23.

Lowry being off the roster would also free up playing time for first-round guard Malachi Flynn. In related news, the team would get worse, though the remaining players could still be enough to make the playoffs, meaning a lottery pick is not necessarily guaranteed.

Conversely, dealing Lowry would be a blow to the team's culture and fanbase, and the end of an era. There is something to be said for having your franchise player retire in your colours. Then again, maybe Lowry leaves for nothing in the off-season anyway.

The trade deadline is March 25.

It's only been seven games. The Raptors are probably still good. But are they title contenders?

In the playoffs, they wouldn't have the best player in series against Brooklyn, Milwaukee, Boston or Philadelphia, and potentially Miami and Indiana too. That's an issue.

Last time Masai Ujiri was in this position, he traded DeMar DeRozan for Kawhi Leonard. And that worked out.

A similar move is staring the Raptors president in the face: James Harden, who reportedly requested a trade out of Houston.

Harden lacks Leonard's playoff bonafides and comes with similar questions about his desire to be in Toronto (maybe he'd enjoy Tampa Bay?). But the Rockets superstar is under contract through next season, and unquestionably would lift the Raptors' ceiling.

The 32-year-old may not fit the Raptors culture; he reported late to training camp after attending a rapper's birthday party and is used to having an offence unto himself — not exactly in line with the Raptors' teamwork ethos.

But it's not like Leonard was a natural fit either. And like Leonard, Harden is a franchise-changing player. Any deal would likely centre around Siakam plus an abundance of first-round draft picks.

It wouldn't be cheap, but it could be a shot worth taking.

There is a pandemic, and the Toronto Raptors play their home games in Florida. That crowd was notably pro-Celtics on Monday.

The loss of Serge Ibaka and Marc Gasol hurts more than some anticipated, though Baynes isn't as bad as he's shown.

Siakam might not be the all-NBA player he was last year, but he'll improve from where he was in the bubble and early in the season.

Get through the season, make the playoffs and then take advantage of the salary cap space that was prioritized over everything else this past off-season. Make every attempt to bring Lowry back. Move back to Toronto for next season.

Maybe being a true contender this season was never in the cards for the Raptors. But that doesn't mean this team should be blown up.

And hey, maybe this was just a seven-game blip worth laughing about come playoff time.