Pascal Siakam and the Raptors are in Oklahoma City on Wednesday to face Shai Gilgeous-Alexander and the Thunder. The 21-year-old from Hamilton is coming off an historic night that saw him record a triple double.

Pascal Siakam knows how tough it is to grab 20 rebounds in a game.

And so the Toronto Raptors forward has a ton of respect for Shai Gilgeous-Alexander, who recorded his first triple-double of his career on Monday with 20 points, 20 boards and 10 assists.

Siakam hauled down 18 boards against New Orleans in Toronto's regular-season opener in November. And so, his confidence surging, he bet teammate Norman Powell that he could get 15 a game after that.

"I was feeling myself," Siakam said laughing. "I don't even know if I got close to that. I stopped the bet, because I was getting two rebounds a game, and it was bad."

"I just know how hard it is to grab that many rebounds," Siakam said. "It's really impressive to be able to do that."

The Raptors face Gilgeous-Alexander and the Thunder on Wednesday in Oklahoma City. The 21-year-old from Hamilton was the best player on the floor when the two teams met two weeks ago in Toronto, scoring 32 points in the Thunder's 98-97 victory. It was the most points ever scored by a Canadian versus the Raptors.

The only other guard to have a 20/20 triple-double in the last 30 seasons is former Thunder star Russell Westbrook. Only three other players registered 20/20 triple-doubles in their sophomore season: Shaquille O'Neal, Charles Barkley, and Oscar Robertson.

Gilgeous-Alexander will be a handful for the Raptors on Wednesday, said Toronto's lead assistant coach Adrian Griffin. The young guard is fast and plays with the versatility and savvy of a veteran.

"It's very rare, a lot of times for younger guys coming into the NBA, that's something that you learn [over time]. That's the Kyle Lowry stuff, 10 to 15 years, and they know all the nuances," said Toronto's lead assistant. "He has great ball control, you really can't speed him up. He plays at his pace and he knows how to go slow-to-fast, fast-to-slow, how to use his size and his strength. He has great command of his game for such a young guy."

The Raptors are expected to have Marc Gasol back on Wednesday. The Spanish big man has missed 12 games with a hamstring injury.

The 34-year-old also had kind words for the Thunder's Canadian star, saying his growth between his first and second seasons has been remarkable. Part of it comes with greater responsibility. He's averaging nine more minutes a night than his rookie season with the Los Angeles Clippers.

"You see it in his body language, his poise. You see his defensive presence. Now you're seeing his shooting a little bit, too. You get to see the growth," Gasol said. "Because the player that he was last year, you saw flashes, you saw the potential.

"Now, they increased his usage by quite a lot, and the responsibility, and you really see what kind of person you also have. Is he a worker? Does he continue to get better? Does he take it for granted? You start to see all those things being answered when you're put in the position of responsibility like he is now."

Gilgeous-Alexander is one of a number of NBA players who's committed to playing for Canada in its last-chance Olympic qualifying tournament this summer in Victoria.

Gasol was a key member of the Spanish team that won gold at the World Cup last summer in China, and said at the time he was surprised to see that Canada had just two NBAers — Cory Joseph and Khem Birch — in China.

"Hopefully you guys get them all to play on the international team," Gasol said after practice Tuesday. "That's going to be the key. Because it's one of the teams with the most potential worldwide. Outside of the US, as far as potential goes, I think Canada is right up there with anybody else. So, you've just got to get them to play."

The Raptors are back home to host Washington on Friday.

Marc Gasol's return to health has been an around-the-clock group effort.

After sitting out 12 games with a hamstring injury, the Raptors centre is expected to play on Wednesday when Toronto visits Oklahoma City.

"Hamstrings can be a little tricky," Gasol said after practice Tuesday. "But thankfully we have a great medical staff. They helped me tremendously every step of the way. And I brought some reinforcements from Spain to work around the clock, so it was awesome."

The 34-year-old Spaniard said it was frustrating to watch from the sidelines.

"Pretty much after the first week you don't feel it as much on normal movements, so you're start jogging, it doesn't feel bad — your body's like, 'OK, I'm ready to play.' And obviously you're not because as soon as you take a long stride, you can re-injure it," he said.

The Raptors have gone 6-6 since the key trio went down in Detroit. Fred VanVleet, who's been sidelined the past three games with a hamstring injury, is the one key player the Raptors are missing.

Gasol is excited to have the team back at near-full strength, but also proud of how the young players responded to the next-man-up challenge.

"To go through it together as a team, go through ups, go through downs and stay even-keel, that's all that matters to me," he said. "That's the beauty of this game, that's what makes you a really good team, going through the processes as a team and getting better each and every night . . . That's what you do it for, to eventually win games as a group because it's a team sport."

The three-time NBA all-star is averaging 6.6 points and 6.6 rebounds in 27 games this year. 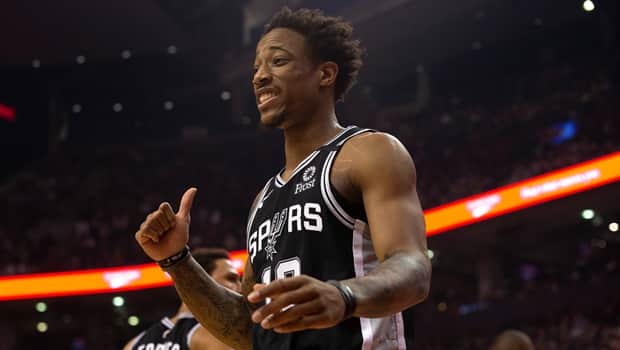 Adrian Griffin doesn't expect much of an adjustment period around Gasol's return to action.

"He knows the game, he knows the game like the back of his hand," Griffin said. "Because his game is predicated on involving others and he's not going out there looking to score 30 points, he's out there to facilitate, run the offence, take the shot when it presents itself, but he's a tremendous team player."

Serge Ibaka has had some excellent games in Gasol's absence.

"That'll be great to have those two," Siakam said. "Obviously you need Serge back out there. And obviously Serge has been playing unbelievable the whole time with all the injuries. He's been great. Having those two guys coming in and out is a nightmare for the other team."

Lowry's college jersey to be retired

Guard Kyle Lowry will see his Villanova jersey raised to the Finneran Pavilion rafters next month.

As part of the team's 100th-season celebrations, the Wildcats are retiring the jersey of Lowry (2004-06) and Ryan Arcidiacono (2012-16) at halftime in separate games next month. Lowry will be feted during the Feb. 26 game against St. John's.

"Kyle brought a toughness to our program that everyone has had to live up to in the years since," Wildcats head coach Jay Wright said. "We're so proud of all his basketball accomplishments, but mostly the man, father and husband that he's become."

Lowry is a five-time all-star, Olympic gold medallist, and led the Raptors to a historic NBA championship last season. At Villanova, he was named 2005 Philadelphia Big Five Rookie of the Year despite missing the season's first seven games after tearing a knee ligament. As a sophomore, he was a second team All-Big East choice and in his two seasons the Wildcats were 5-2 in NCAA Tournament play, advancing to the 2005 NCAA Sweet 16 and the 2006 NCAA Elite Eight.

"Ryan watched Kyle play and learned from him," Wright said in on the Wildcats' website. "He became one of the great Villanova leaders of all-time. His tenacity, intelligence and charisma set an example for all the Villanova guards who followed him."

The NBA champion Toronto Raptors have received the league's first-ever NBA team of the year award.

The Raptors were recognized for their achievements across team business, including ticketing, partnerships, marketing, digital media, business analytics and innovation.

The honour was one of several NBA awards announced at the league's annual sales and marketing meeting in Miami. All 30 teams were invited to submit a nomination in each category for awards recognizing leaders and innovators across key areas, with a committee of league and team executives choosing the winners.

The league noted Toronto was near the top of the league for ticket renewals, total tickets sold and season tickets sold. The Raptors were also recognized for their "innovative approach to partnerships" including Drake's OVO.