OG Anunoby hit a buzzer-beating three-pointer to give the Toronto Raptors life in the NBA playoffs with a 104-103 win over the Boston Celtics in Game 3 on Thursday.

The buzzer sounded, the ball dropped, and OG Anunoby walked toward the bench like a businessman after a day's work.

With half a second left and the Toronto Raptors facing almost certain elimination, Anunoby caught a crosscourt pass from Kyle Lowry that sailed over everyone's heads, and hit a three-pointer to breathe life into the NBA champions' playoff hopes.

"I expected to make it," said Anunoby, who was mobbed by delirious teammates after the clutch shot. "I don't shoot trying to miss, I wasn't surprised."

Lowry had 31 points and found Anunoby with the precision pass with 0.5 seconds on the clock to lift the Raptors to a thrilling 104-103 victory over the Boston Celtics on Thursday. 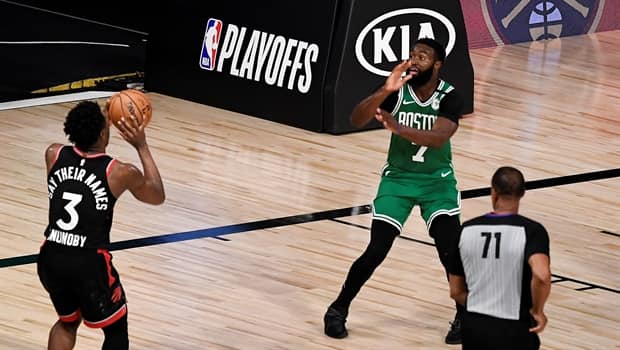 The Raptors dodged a huge bullet in slicing the Celtics' lead to 2-1 in their best-of-seven series heading into Saturday's Game 4. No NBA team has ever come back from being down 0-3 to win a series.

"I'm not sure that that doesn't rank with our gutsiest performances," coach Nick Nurse said.

Fred VanVleet had 25 points and Pascal Siakam, who's struggled in the NBA restart, had 11 of his 16 points in the third quarter. Anunoby, who missed all of Toronto's historic post-season run last year after an appendectomy, finished with 12 points.

Lowry, who played the entire second half and finished with eight assists and six rebounds, said the last play wasn't drawn up for Anunoby. But there were perhaps no better hands to receive the ball than the unflappable 23-year-old.

"That's just what he does, that's him," Lowry said. "I know deep down inside he's excited and he'll get a lot of text messages and he needs the credit, he deserves all the love and celebration he's getting tonight, that kid works extremely hard and it's his moment.

"Let him live in it and then I'll ruin it tomorrow when we're watching film and I'll tell him what he messed up on."

VanVleet is a fan of Anunoby's confidence.

Lowry played like he had no intention of leaving Disney World yet, carrying Toronto with little support through a first half that saw the Raptors' seven-point lead evaporate into a 10-point deficit at halftime.

He said he's received a text from a close friend earlier in the day instructing him to "stop waiting."

"That was pretty much the game plan for me tonight, to stop waiting and be aggressive from the jump. [The friend] was correct," he said.

Who was the friend? Lowry wouldn't say. But suggestions on social media that it was former Raptors teammate DeMar DeRozan whipped Raptors fans in a frenzy.

Toronto locked down on the defensive end after the break, and six consecutive stops sparked a 21-9 run, capped by a Siakam three-pointer, that finally had the Raptors back on top with 3:40 to play in the third.

The quarter closed on a controversial call when Brad Wanamaker kneed Lowry in the groin while driving to the hoop late in the third quarter, leaving Lowry curled on the court in pain. Both he and Nurse were livid, but after the officials reviewed the play Lowry was called for a defensive foul, and Wanamaker's basket and free throw put Boston up 80-76 with one quarter left.

"We've had a lot of gutsy performances from this crew. It's kind of what this group is. . . a lot of guys who have fought their whole lives to get to where they are, amid other expectations," Nurse said.

Easily the coolest human on the planet. <a href="https://t.co/AmZ4TnpYCk">pic.twitter.com/AmZ4TnpYCk</a>

The Raptors were finally moving the ball in the fourth quarter, and when Norm Powell drilled a three with 6:29 to play, Toronto took a two-point lead.

After VanVleet drove to the hoop to tie it up late, Walker found a wide-open Daniel Theis under the hoop for an uncontested dunk with 0.5 on the clock.

It looked like game over until Anunoby took the pass from Lowry to score.

"Really, really happy for him, he played his tail off, man," Nurse said. "Nice that he gets big reward for it because he played so hard all over the court."

Looking to buck the odds

Only six per cent of teams have ever come back from 0-2 to win a series, including the Raptors last season. With Kawhi Leonard in the lineup, they lost their first two to Milwaukee in the conference finals but then won four straight to advance to the Finals.

The big difference in bubble basketball though is that Toronto would have played this game and Saturday's on the parquet floor of Boston's TD Garden having given up homecourt advantage. But in the NBA bubble, homecourt advantage means 300 virtual fans, and little else.

No matter the venue, Boston has had the answer for the NBA champions all season, losing just once in the previous six meetings, including three previous wins in the NBA bubble.

"It hurts and stings to lose," Celtics coach Brad Stevens said. "But we'll just get back to it and get ready for Saturday."

Lowry pushed the pace from the tipoff, scoring 15 points in a first quarter that saw Toronto lead by seven. Walker hit a three-pointer at the buzzer and the Celtics led 33-28 to end the quarter.

The woeful shooting that's plagued the Raptors throughout this series continued in the second quarter. They shot 3-for-13 from distance, and trailed by as many as 10 points in the quarter, and Walker again hit a buzzer-beater to end the quarter and Boston went into the locker-room up 57-47.