It was exactly one year ago Sunday when Jimmy Butler walked into the Miami Heat practice gym, took a seat on a makeshift stage and said he wanted to be part of the team's next title run.

It was exactly one year ago Sunday when Jimmy Butler walked into the Miami Heat practice gym, took a seat on a makeshift stage and said he wanted to be part of the team's next title run.

He'll have that chance.

The Heat are going to the NBA Finals — surprising many, perhaps, but not themselves. Bam Adebayo scored a season-high 32 points and grabbed 14 rebounds, Butler scored 22 points and the Heat won the Eastern Conference finals for the sixth time by topping the Boston Celtics 125-113 on Sunday night.

"A great series. It was so competitive," Heat coach Erik Spoelstra said. "I mean, in many ways, this was a seven-game series, just how competitive it was. Extremely well-coached and well-put together and we are just honoured to be a part of that type of series in the conference finals, and then we get an opportunity for the next stage. Our guys will look forward to it. We're going to try to enjoy it for a night." 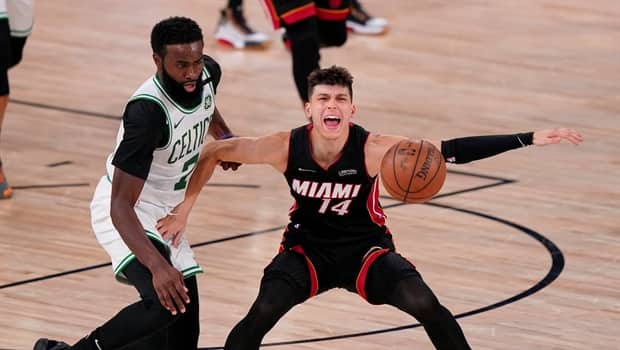 Herro is clutch in 4th quarter as Heat eliminate Celtics

The Heat won the series 4-2 — and now, waiting on that next stage to decide the NBA title, are LeBron James and the Los Angeles Lakers. Game 1 is Wednesday night.

Tyler Herro scored 19 points, Duncan Robinson and Andre Iguodala each had 15 and Goran Dragic added 13 for the Heat.

"We deserve to be here," Dragic said.

Jaylen Brown scored 26 points, Jayson Tatum had 24 and a career-high 11 assists, and Marcus Smart and Kemba Walker each scored 20 points for Boston — which fell in the East finals for the third time in the last four seasons.

'They're the best team in the East' says Celtics coach

"Miami deserves a lot of credit," Celtics coach Brad Stevens said. "They're super physical, super tough, very, very savvy. I think they're the best team in the East and deserve to be representing the East in the way that they have played."

Miami was down by six early in the fourth before regaining control. A 6-0 burst — Herro had the last five of those points, needing only 31 seconds to do so — tied it at 96. Boston took the lead twice more, with Adebayo answering both times, first with a dunk, then a go-ahead three-point play with 6:16 left.

He smacked the floor in celebration.

It's like they knew what was coming. They never trailed again. Herro had a pair of baskets in a 9-0 burst that put the Heat up by 10, Adebayo found Butler for a layup and a 116-102 lead everyone on the Heat bench was on their feet.

"This means everything," Herro said.

And before long, all the Celtics could do was offer their congratulations.

The Heat are the only NBA franchise with six Finals appearances in the last 15 years. They're seeking their fourth title, and this chance didn't come easily.

The Heat had a 5-for-5 stretch from 3-point range in the first quarter, but otherwise struggled again from beyond the arc in the first half. They were 6 for 14 from deep in the first 24 minutes, Boston was 11 for 23 before the break and the Heat took a 62-60 lead into halftime.

And the margin remained two going into the fourth.

Iguodala's fourth 3-pointer — in as many attempts — with 4:20 left in the third put the Heat up eight, before Brown had five points in a 10-2 Boston spurt to tie it. Dragic had a go-ahead layup on Miami's final shot of the quarter and it was 88-86 Heat with 12 minutes remaining.

The Heat scored 35 of the game's final 52 points. The game was theirs. So was the silver trophy that conference champions get.