Los Angeles Lakers star Kobe Bryant will play his final NBA game on Wednesday night against the visiting Utah Jazz. The 37-year-old forward has enjoyed many memorable moments during his prolific 20-year run. 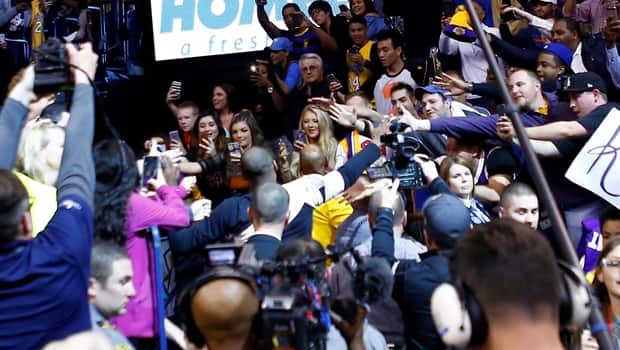 One last road introduction for Kobe

5 years agoVideo
0:29
Kobe Bryant is introduced on the road for the final time on Monday in Oklahoma, as the Lakers star is set to retire on Wednesday. 0:29

Los Angeles Lakers legend Kobe Bryant, 37, will call it a career when he plays his final game Wednesday night against the visiting Utah Jazz at the Staples Center.

It has been a prolific 20-year run for the five-time NBA champion. The "Black Mamba" has racked up countless accolades, collected multiple rings, made seven Finals appearances, and reached the post-season 15 times.

In honour of what will be the finale of his storied career, we look back on a few of Kobe's greatest moments.

It was just the beginning, but Bryant didn't take much time to establish himself as a force in the NBA.

After entering the league in the 1996-97 season, an 18-year-old Bryant scored big in his first all-star weekend by taking the top prize in the Slam Dunk Contest. It was the one and only time he would win it in 18 all-star appearances.

Steps up in Shaq's absence

The 2000 NBA Finals proved Bryant could also handle the pressures of the spotlight in critical situations. In Game 4, he played through an ankle injury and came up huge when Shaquille O'Neal fouled out in overtime.

After scoring just six in the opening half, Bryant pushed the Indiana Pacers to the brink of elimination by netting eight points, which included an alley-oop off a shot from Brian Shaw in the dying seconds of extra time.

Of course, Bryant went on to win his first of five championship titles by helping the Lakers defeat Indiana in six games.

Thankfully it wasn't the only huge alley-oop that Bryant was a part of in his team's 2000 playoff run. In Game 7 of the Western Conference final against the Portland Trail Blazers, Bryant set up Shaq for an alley-oop to start a come-from-behind rally.

This one may be hard for Toronto Raptors fans, but it has been 10 years since Bryant put down 81 points for the strongest individual performance in recent memory.

Only Wilt Chamberlain collected more points in a single NBA game when he tallied 100 for the Philadelphia Warriors in 1962.

Bryant won his fourth championship in 2009 and it was the first time that he wasn't bolstered by a superstar teammate like Shaq.

He proved he could win without that caliber of assistance, finishing the series against the Orlando Magic with an average of 32.4 points per game to be named Finals MVP for the first time.

Bryant went back-to-back, winning his final championship and NBA Finals MVP in 2010. It was much more of a grudge match with the Lakers facing the Celtics two years after falling to them in the 2008 Finals.

It was the first time Bryant was forced to claim a championship in a deciding Game 7 and against a much more formidable team than the Magic were the previous year.

He averaged 28.6 points through the series and was a motivating factor for Los Angeles.

Many won't consider this worthy, as every American Olympic basketball team is stacked with otherworldly talent, but Bryant won Olympic gold medasl in 2008 and 2012. As the biggest sporting stage in the world, it holds up in the discussion of any athletes career highlights.