Everything to know about the FIBA Basketball World Cup

The most important international basketball tournament outside of the Olympics tips off Saturday. Here's how the FIBA Basketball World Cup works and what it means for Canada.

A lot of NBA stars have bailed, but Olympic spots are still up for grabs

The most important international basketball tournament outside of the Olympics tips off Saturday in China. It's a big one for Canada. Here's what you should know about the FIBA Basketball World Cup:

For starters, international basketball supremacy — at least in theory.

Everyone knows the United States is by far the dominant force in the sport. Eleven of the 15 players on this year's All-NBA team are American. Since the Olympics started allowing NBA players in 1992, the U.S. has won six of the seven men's gold medals — including the last three in a row. It also won the last two World Cups, in 2010 and '14.

This year, most of the best American NBA players are skipping the World Cup. That at least opens the possibility that the states's reign will come to an end. But even if someone else wins, no one will actually believe that team is a better basketball country than the U.S. And the World Cup lacks prestige anyway. Unlike its soccer equivalent, it's just not taken all that seriously by most pro basketball players and fans — especially in the U.S.

But the Basketball World Cup is worth watching because of the other thing on the line: Olympic spots. The tournament in Tokyo next summer will have 12 teams. The only country with a guaranteed spot right now is Japan because it's the host. Everyone else has to play their way in — even the U.S.

Seven Olympic berths will be decided at the World Cup, spread over five geographical regions. The top two finishers from both Europe and the Americas get a ticket to Tokyo. So does the top one from each of Africa, Asia and Oceania.

That leaves four Olympic spots. Those will be decided at four separate wild-card tournaments next summer — just weeks before the Tokyo Games. The winners of those get into the Olympics. That's cutting it close, though, which puts pressure on teams to clinch at the World Cup.

WATCH | How Canada can qualify for Tokyo: 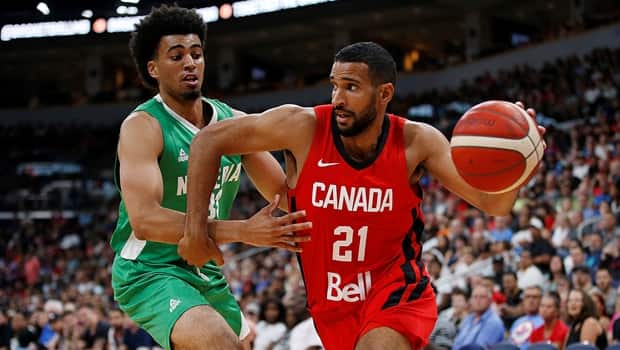 1 year ago
1:29
With the World Cup tipping off in China, Rob Pizzo looks at what lies ahead for Canada on the hardcourt. 1:29

How does the tournament work?

The 32 teams are separated into eight groups of four. Each team plays the three other teams in its group. The teams with the two best records in each group advance.

Those 16 teams are then divided into four groups of four, with teams from the same original group staying together. The result from their first-round meeting carries over, so everyone just plays the other two teams in their new group. When that's done, the top two teams in each group (that's eight total) advance to the quarter-finals.

From that point on, it's single-knockout right through the championship game on Sept. 15 in Beijing.

Who are the best teams and players?

Even though it's sending a B team (maybe even a C or D), the U.S. remains a pretty big favourite. Betting odds posted by Pinnacle imply the Americans have about a 66 per cent chance of winning the World Cup.

You could make a Dream Team from the list of American players not going to the World Cup. They would destroy everyone in China. That squad would have the reigning NBA Finals MVP (Kawhi Leonard) and five of the last six guys to win a regular-season MVP — James Harden, Russell Westbrook, Steph Curry, Kevin Durant (if healthy) and LeBron James. Throw in MVP finalist Paul George, perennial MVP contender Anthony Davis, elite guards Klay Thompson and Damian Lillard and … yeah. Everyone else would be playing for silver.

But a lot of other countries struggled to get their NBA players out for the World Cup too, so the U.S. team is still very strong by the standards of this tournament. The primary ball handler is Boston Celtics guard Kemba Walker, who was an all-star game starter last season with Charlotte. Milwaukee's Khris Middleton is another all-star. Utah's Donovan Mitchell and Jayson Tatum are rising young stars. The roster thins out toward the back, but this is still easily the deepest team in the tournament. And it's coached by one of the all-time greats in San Antonio's Gregg Popovich.

The team with the next-best odds is Serbia, which has All-NBA First Team centre Nikola Jokic and three other NBA players on its roster. After that is Greece. Oddsmakers are giving them a puncher's chance because they have reigning NBA MVP Giannis Antetokounmpo. But the rest of the roster is painfully thin.

What's the deal with Canada?

Man, this could have been great. Canadian basketball has entered a golden age. There's never been this much NBA talent coming out of this country. The World Cup looked really exciting because we'd finally get a chance to see all those guys play together and it seemed like Canada had a very good chance of clinching an Olympic spot — maybe even winning the tournament.

But over the last few weeks, almost every Canadian NBA player pulled out of the World Cup. The bailers included star guard Jamal Murray (who recently signed a $170-million US contract extension with Denver), wing Andrew Wiggins (a former No. 1 overall pick who has disappointed as a pro but still has his own $148-million deal) and big man Tristan Thompson (a recent NBA champion as a LeBron sidekick). Plus RJ Barrett (the No. 3 pick in this year's draft) and Shai Gilgeous-Alexander (a favourite of NBA aficionados who's heading into his second year). Big man Kelly Olynyk was fully committed to playing before hurting his knee in an exhibition game.

Only two NBA players are left on the roster, and they're far from stars: guard Cory Joseph and big man Khem Birch. Coach Nick Nurse, who just led the Toronto Raptors to a surprise NBA title, is one of the more creative and respected coaches in the league. He'll try to get the most out of a depleted roster that at least has some shooting. Solid European-team pros Kevin Pangos and Kyle Wiltjer have both looked good during Canada's exhibition tour. Brady Heslip, who finally joined the team for its final exhibition, is another excellent long-range shooter. Forward Oshae Brissett (technically a Raptor after signing a contract that will get him invited to training camp) put up good scoring and rebounding numbers in the warmup games. But his status is up in the air after he sat out the last one with an injury.

Obviously they'd like to win the tournament, but the main job is to get one of those two Olympic spots up for grabs for countries from the Americas region. You have to figure the U.S. gets one, so Canada will most likely be competing with five countries for the other: Argentina, Brazil, Dominican Republic, Puerto Rico and Venezuela.

In order to place higher than those countries, Canada will almost certainly have to make it out of its group. Remember, only the top two advance, and Canada is one of three solid teams in Group H. Australia is without its best player, 76ers star Ben Simmons, but it still has a handful of decent NBA role players. You may know Patty Mills, Matthew Dellavedova, Joe Ingles and Andrew Bogut. Lithuania has former Raptor Jonas Valanciunas and a highly regarded young NBA player in Domantas Sabonis (son of the great Arvydas Sabonis). Senegal is weak. Canada has to beat them.

Pinnacle has Canada as the third best team in the group, but it's tight. The betting odds imply Australia has about a 37 per cent chance to win the group, followed by Lithuania (34 per cent) and Canada (28 per cent).

Remember, though, Canada's Olympic hopes can't completely die here. There's still the four last-chance qualifying tournaments next July. The 16 teams that do the best at the World Cup without clinching an Olympic spot automatically get into one of those, plus two "selected" teams from each of four regions (Americas, Europe, Africa, Asia/Oceania). It's unclear what "selected" means, and maybe Canada's NBA talent will catch the eye of the selectors. In any case, if it comes down to a last-minute qualifier, we'll have to hope those missing NBA players show up for it.

You can watch Team Canada's FIBA World Cup opener against Australia on Road to the Olympic Games on Sunday at 1 p.m. ET.

In Canada, the entire tournament will be streamed live, exclusively on DAZN.