Hamilton's Jean-Victor Mukama broke out with 28 points as the Honey Badgers defeated the Saskatchewan Rattlers 86-73 at the CEBL Summer Series on Tuesday in St. Catharines, Ont.

Hamilton's Jean-Victor Mukama broke out with 28 points as the Honey Badgers defeated the Saskatchewan Rattlers 86-73 at the CEBL Summer Series on Tuesday in St. Catharines, Ont.

Mukama, averaging 7.6 points in the five previous games, started for the Honey Badgers (3-3) and played more minutes than he had the entire tournament. The Hamilton native and former Raptors 905er caught fire from deep with six three-pointers and added six rebounds and four assists.

Guard Brianté Weber, who scored the Honey Badgers' game-winner, contributed 13 points on 6-of-7 shooting coming off the bench.

Hamilton burst out of the gates with a 30-14 first quarter, but saw its lead quickly erased as the Rattlers (1-4) responded with a 17-point advantage in the second. After a tight third frame, Hamilton broke through in the fourth to pick up the win. 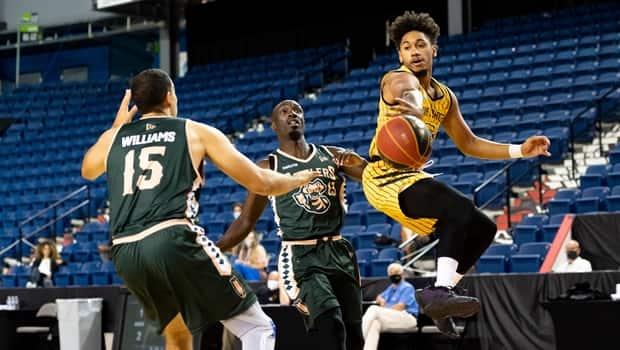 3 months ago
1:00
Jean-Victor Mukama dropped 28 points in Hamilton's 86-73 win over Saskatchewan at the CEBL Summer Series on Tuesday. 1:00

In a do-or-die game for Niagara, the River Lions' Trae Bell-Haynes scored the Elam Ending winner to edge the Ottawa BlackJacks 81-79 and qualify for the knockout round.

Meanwhile, Ottawa's loss means it'll have its own do-or-die matchup against the Rattlers on Wednesday.

Tied at 71 with the target score set at 80, the BlackJacks (2-3) scored five straight points en route to a 79-76 lead. But Bell-Haynes responded with an and-1 to even the score before securing a defensive rebound on the opposite end and racing for a transition layup that sealed the Niagara (2-4) win.

While Bell-Haynes came up clutch, it was fellow starting guard Kassius Robertson who kept the River Lions in the game with 28 points on the night — two shy of the Summer Series high. Guard Daniel Mullings and captain Tyrone Watson also contributed with 11 and 10 points, respectively, off the bench.

Live coverage continues Wednesday with the Fraser Valley Bandits (3-2) taking on the Guelph Nighthawks (3-2) at 5 p.m. ET before the Saskatchewan Rattlers (1-4) square off against the Ottawa BlackJacks (2-2) at 7:30 p.m. ET.

CBC Sports has live coverage of the entire tournament, through to the final on Aug. 9. 3 months ago
1:00
Trae Bell-Haynes scored the game-winner to edge Ottawa 81-79 and qualify Niagara for the knockout round. 1:00
CBC's Journalistic Standards and Practices|About CBC Sports