Despite overwhelming 3-on-3 success, Canadian women will not be in the Olympics

Canadian women have dominated the new Olympic sport of 3x3 basketball this year. But it's not enough to earn them a spot at the Tokyo Games.

The city of Edmonton once boasted the best women's basketball program in the world.

Fast forward to the present, where behind the star power of Edmonton-born twins Michelle and Katherine Plouffe, the city is back in a position of dominance, though not in the 6-on-6 game the Grads played, but rather the new Olympic sport of 3-on-3.

"They were pioneers in women's sport and women's basketball," Michelle Plouffe said of the Grads to CBC Sports. "We're trying to be trailblazers in 3-on-3. It's definitely humbling to be mentioned in the same sentence as that group of women. But we had the same goal: to give women a chance to see basketball played at a high level."

Team Canada's 3-on-3 women's basketball team followed in the Grads' footsteps in terms of winning, too. The six teammates of the Plouffe sisters along with Paige Crozon, Mariah Nunes, Catherine Traer, and Brittany Johnson were arguably the best 3-on-3 team in the world, going 27-7 in winning four international tournaments. They went 19-1 from August onward, outscoring opponents by a total of 138 points.

"Definitely [I] thought that there was no way people could stop us," Traer said. "We beat the U.S. a number of times. We beat [the No. 1-ranked] France early in the summer when we didn't really know what we were doing. Definitely we would have put up a good fight to medal, for sure, at the Olympics." 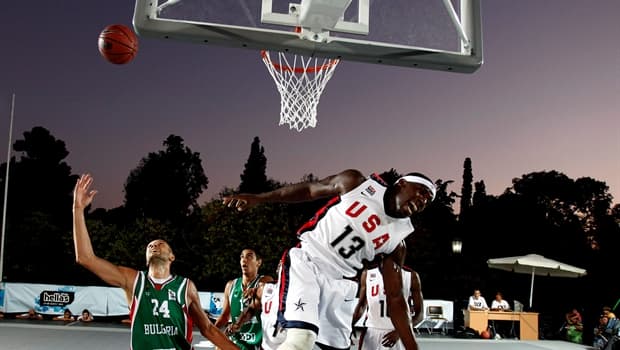 What is 3x3 basketball? An explainer of the new Olympic sport

But despite the overwhelming success, Team Canada will not be playing in the Olympics when the sport makes its debut in Tokyo.

In order to ensure that 3-on-3 basketball would be viable after the Olympics ended, the International Olympic Committee and FIBA decided that the top 100 athletes of each gender would earn points for their national federation. Canada had few sanctioned events and little participation in those events; furthermore, a complex rule dictated Canada could send only one gender to the Games, and the women's 3-on-3 team was ruled out because the country had been represented by a 5-on-5 women's team at the previous two Olympics. Canada has not had a men's 5-on-5 team at the Olympics since 2000, so the men's 3-on-3 was given the nod.

"How could you not let one of the best teams in the world try to qualify for the Olympics? But the system is a little bit more complicated than we had thought," Katherine Plouffe said.

"I was watching [the announcement] over FaceTime with Katherine [Plouffe]," Michelle said. "It was almost like a numb feeling at first because it was just so shocking. It was numb, and then it was just heartbreak."

If anyone can inspire Canada to embrace the 3-on-3 game in the future, it is the women's team. The Plouffes are uncommonly talented for the 3-on-3 game. Both were Olympians for the Canadian women's traditional 5-on-5 team in 2016. They are of a far higher calibre than most 3x3 players and their dominance was palpable.

Michelle was fifth in the series in points per game and first in total blocks; Katherine was second in points and third in rebounds.

The newly established FIBA 3-on-3 women's series did not offer prize money for winning teams. Canada Basketball did not have enough resources to fund Edmonton's women either. Instead, the Plouffes and their teammates were left to cobble together finances from a patchwork of areas, including their own savings accounts. The decision to contribute their own money, however, was not difficult.

"I think I looked at it as an opportunity to get to the Olympics," Traer said. "For me, that was a dream. It's always been my dream to play in the Olympics."

"That was what was fuelling us," Michelle said.

While the women paid for much of their own airfare during the summer, Paul Sir, the executive director of the Alberta Basketball Association, hit the pavement and raised $28,000 to pay for the players' FIBA and tournament fees. Though they couldn't afford to play in every event, they raised Canada's federation ranking from 92nd to 26th in a few months' time.

After dipping into their savings, spending their summers playing this new sport and dominating the competition, the women on Team Canada were frustrated when they weren't invited to the Olympic qualifier.

However, the disastrous end to the season doesn't diminish the positives that Team Canada did accomplish. The highs of winning tournament after tournament, to the lows of not making the Olympics, could all be worth it.

"Obviously, to start something, it's not going to be successful right away," Michelle Plouffe said. "We know that. ... But if we can take a small step in the right direction, and make a small difference, and a small impact, I think it's just getting the ball rolling for women to come after us and take it from there, or continue rolling with them. I think then it will be worth it."

"Hopefully we're getting the conversation going, and we can just build from here."

Canada will have a men's team in the March qualification tournament in India. The men have an uphill battle for Olympic qualification, but Canada could still have 3-on-3​​​​​​​ representation at the biggest stage.