Masahiro Tanaka's seven-inning gem was saved when Aaron Judge prevented a home run in right field, and Greg Bird homered to give the New York Yankees a 1-0 victory over the Cleveland Indians in Game 3 on Sunday night, extending their AL Division Series.

​Good thing for Masahiro Tanaka and the Yankees that Aaron Judge is 6-foot-7.

"He was brilliant," Yankees manager Joe Girardi said about Tanaka. "He gave us everything we needed."

Aroldis Chapman got a five-out save as the wild-card Yankees avoided a three-game sweep by the defending AL champions. With two on in the ninth, Chapman struck out cleanup hitter Jay Bruce before Carlos Santana flied out to end it.

Game 4 is Monday night at Yankee Stadium, with young ace Luis Severino scheduled to start for New York. Cleveland will go with Game 1 winner Trevor Bauer on three days' rest, though there's rain in the forecast.

"I consider this normal rest for me. I enjoy pitching on short [rest]," Bauer said. "If I could draw it out, personally, this is how I'd pitch every time."

New York got a splendid performance from Tanaka in an old-fashioned October pitching duel with Cleveland starter Carlos Carrasco. Tanaka received a big boost when Judge robbed Francisco Lindor of a two-run homer in the sixth.

Bird came through with the huge hit New York had to have when he connected against Miller leading off the seventh. The first baseman was fired up as he greeted happy teammates in the dugout. 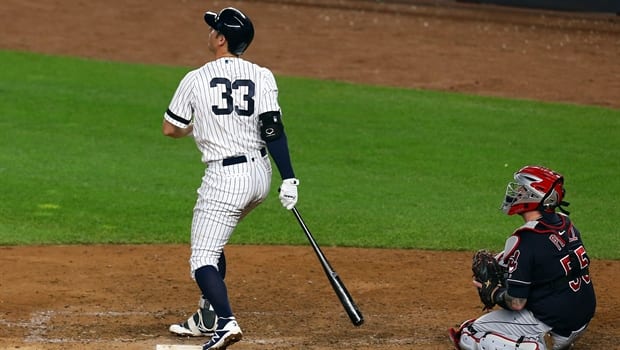 Sidelined by injuries most of the past two seasons, Bird also went deep in Game 2.

"I'm not ready to be done playing and I don't think the rest of the team is," he said.

New York rebounded after blowing a five-run lead Friday during a 13-inning loss in Game 2 that led to heavy criticism of Girardi, booed Sunday night by the home crowd during pregame introductions.

"Not the first time," Girardi said, acknowledging it's no fun to hear catcalls. "I kind of expected it."

This was the Yankees' first 1-0 post-season victory since Game 3 of their 2001 ALDS against Oakland, when Derek Jeter's backhanded flip beat Jeremy Giambi to the plate for a crucial, memorable out.

Judge's grab was the big defensive play Sunday. With a runner on first in a scoreless game, Lindor lofted a sixth-inning drive toward the short right-field porch at Yankee Stadium. Judge backed up to the wall and barely needed to jump to extend his glove above the fence and make the catch, just to the right of the auxiliary scoreboard.

"Who better to reach up there and grab it than him?" Bird said.

The sellout crowd of 48,614 roared and Judge flashed a bright smile. It was the first time the rookie slugger had robbed an opponent of a home run and the first time Lindor had ever been so denied, according to ESPN Stats & Info.

"I had to do something," said Judge, who is 0 for 10 with eight strikeouts in the series. "I wasn't obviously making any contact at the plate, so you've got to make an impact on the game somehow and luckily I was able to do it on defence."

Tanaka tipped his cap in appreciation and held Cleveland down until he was done. The right-hander, beaten 3-0 by Dallas Keuchel and the Houston Astros in the 2015 AL wild-card game, struck out seven, walked one and allowed three hits.

He whiffed three of his first four batters and was aided by two double plays.

"That's the best performance that I've seen from him," Girardi said.

The biggest test for Tanaka came in the fourth, after Jason Kipnis' one-out triple glanced off the thumb of Judge's glove in deep right field and rolled away.

Tanaka beared down and fanned No. 3 batter Jose Ramirez and Bruce, then turned to shout and slapped his mitt in excitement.

"I came here to pitch in these type of games," Tanaka said through a translator.