Guerrero Jr. ready for next challenge with triple-A Bisons

Fans trickled in early to take in batting practice at Coca-Cola Field while stadium workers neatly folded No. 27 Bisons T-shirts outside the gift shops nearby. Buffalo was getting ready for the Vladdy show.

Fans trickled in early to take in batting practice at Coca-Cola Field while stadium workers neatly folded No. 27 Bisons T-shirts outside the gift shops nearby.

Buffalo was getting ready for the Vladdy show.

But Vladimir Guerrero Jr., the top prospect in Major League Baseball, had been proving for a while that he's ready for Buffalo.

After dominating double-A over 61 games, the star third baseman made his triple-A debut Tuesday, officially going 0-for-1 with a trio of walks and a sacrifice fly in the Bisons' 11-8 loss to the Lehigh Valley IronPigs.

Guerrero, the son of the Hall of Famer and former Montreal Expos great with the same name, batted third in manager Bobby Meacham's lineup, but didn't get many pitches to hit early on.

Click on the video player below to watch Guerrero's successful debut: 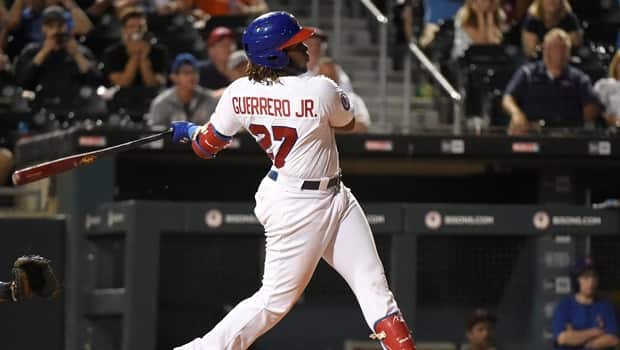 "I went to home plate to swing and they were not throwing anything to swing [at]," Guerrero said through a translator.

"When I go to home plate I just stand there waiting for my pitch and if they don't throw my pitch I'm not going to swing at it."

Guerrero walked in his first three at-bats, coming around to score twice, and showed his defensive side with a couple of neat snags at third base.

He received a loud ovation from the crowd of 9,477 each time he stepped to the plate, and his second walk — on four straight pitches from Ranger Suarez — sparked a chorus of boos toward the IronPigs starter.

Click the video player below to see the fan reception in Buffalo: 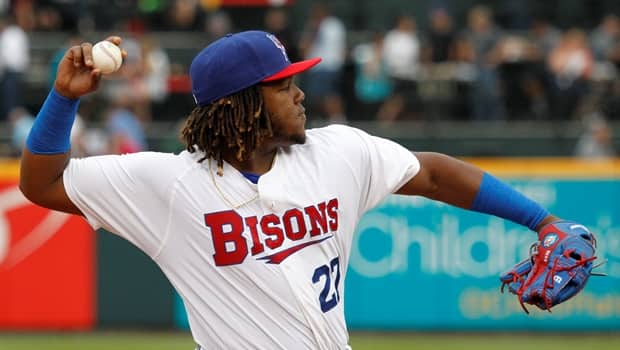 'I don't feel any pressure'

Guerrero picked up his first triple-A RBI with a sac fly in the sixth and grounded out in his last at bat in the eighth.

The performance was enough to impress Meacham, whether he got a hit or not.

The 19-year-old, now a step closer to the major leagues, appeared calm, cool and collected before the game in spite of the massive attention surrounding his promotion.

"I don't feel any pressure," Guerrero told a throng of media members through a translator. "I just try to get better every day.

"I just try to do my job, do the things that I need to do every day in order to get better."

Guerrero put up ridiculous numbers for double-A New Hampshire this season, batting .402 with 14 homers and 60 RBIs despite missing a month of the season with a knee injury.

And he wasn't surprised by those stats.

Guerrero signed a $3.9 million US deal with the Blue Jays as an international free agent in 2015 when he was just 16 years old.

He's garnered increasing attention since then, with MLB Pipeline ranking him the top prospect in the minor leagues.

Meacham called Guerrero's laid back attitude "impressive" in the face of all of that. And the manager isn't worried about the hype surrounding his newest star.

"I like to say if you're confident in your abilities and you believe in yourself and you know deep down that you should be here, [the hype] is just going to come with it," Meacham said. "I think he expected this to come with it, he knows what his dad went through, he's seen big league situations all through his life and this is just part of what he has to go through right now.

"And all the attention, he's earned it."

Guerrero took time to sign autographs for fans before the game, with some asking for his signature on Blue Jays jerseys that were already imprinted with his name and number on the back.

Guerrero said afterwards it was nice to see that kind of support.