Logan Morrison hit the third of Tampa Bay's three home runs in the eighth inning as the Rays rallied for a 7-4 win over the struggling Toronto Blue Jays on Friday. 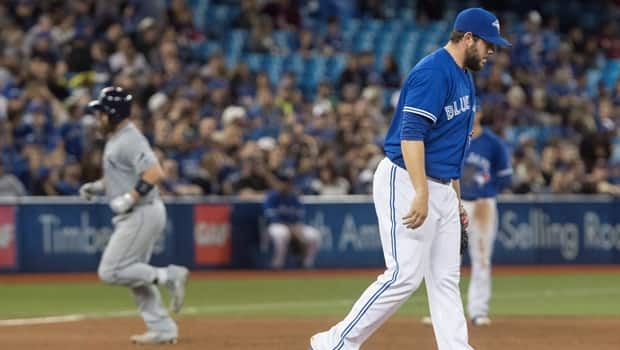 4 years agoVideo
1:42
Toronto blew their 8th save opportunity of the season in 7-4 loss to the Tampa Bay Rays 1:42

Marcus Stroman sat in the Blue Jays dugout with his mouth gaping open and a look of disbelief in his eyes.

He had left the game in the eighth inning with his team up by a run. Within minutes, that lead had evaporated.

Logan Morrison hit the third of Tampa Bay's three home runs in the eighth inning as the Rays rallied for a 7-4 win over the struggling Blue Jays.

"It's just frustrating," Stroman said. "We kill ourselves to be at our best out there so when things don't go our way it's tough.

"We're doing everything in our power to turn this around."

Despite that effort, the losses keep piling up for the Blue Jays (6-17), a team many viewed as strong playoff contenders at the onset of the year.

And for the second time in the past three games, the loss came after Toronto's bullpen gave up a late lead.

Kevin Pillar put the Jays up 3-1 on a solo homer in the seventh inning but the Rays (12-12) stormed back in a thunderous manner.

Corey Dickerson led off the eighth by tagging Stroman for a solo shot on the first pitch he saw, Evan Longoria tied the game with a home run off Jason Grilli (1-3) two batters later and Morrison added to the barrage with a two-run shot off Dominic Leone after Grilli had walked Brad Miller.

"It's really tough," Toronto manager John Gibbons said. "Like that first game of the double-header [in St. Louis] yesterday. We were in a position to win that one and that's the key — when you're in a spot to win you've got to win those games.

"Losing's always tough. Especially the close ones when you're in the driver's seat."

Derek Norris had an RBI single in the second, then added a home run off Leone in the ninth that sent many of the 36,256 in attendance to the exits. A J.P. Howell wild pitch in the ninth allowed Tampa to score its seventh run.

Reliever Austin Pruitt (3-0) pitched three innings for the win and Chase Whitley earned the save.

Jose Bautista hit a sacrifice fly for the Blue Jays (6-17) and Darwin Barney drove in a run on a single. Toronto also scored on a double-play groundout.

Stroman struck out 10 batters and allowed two runs through 7 1/3 in the no-decision.

"Just being aggressive," Stroman said of his solid outing. "Locating with my sinker, mixing in some four-seamers and keeping them off-balance with the slider."

Norris plated Tim Beckham from third base with a single to left field for a 1-0 lead in the second inning. Beckham had reached on a two-out walk and advanced to third on a base hit from Shane Peterson.

A triple shy of cycle

Pillar led off the fifth inning with a double and scored on a Barney single down the right-field foul line. Barney then scored on a Kendrys Morales groundout two batters later.

Pillar, who had a single, two doubles and a walk to go along with his home run, reached base safely five times in a game for the first time in his career.

"Kevin's having a tremendous year," Gibbons said. "He was a triple shy, there was a chance he could have had the cycle. But he's confident, he's running with that leadoff spot, I know that."

The Blue Jays tacked on a futile run in the bottom of the ninth. Pillar led off the inning with his second double, moved to third on a base hit from pinch-hitter Chris Coghlan and scored on Bautista's sac fly.

But Morales popped out and Justin Smoak struck out to end the game.

"We didn't win so it's tough to feel any type of way," Stroman said. "We're struggling right now with the squad to get wins but everyone's doing what they need to be doing between each start to make sure they're prepared and ready to go out there.

"It's just a matter of things turning around for us."