Former Blue Jays star shortstop Tony Fernandez, who won a World Series with Toronto in 1993 and four consecutive Gold Glove in the 1980s, has died at age 57 from a stroke and complications from a kidney disease.

Buck Martinez remembers referring to Tony Fernandez as "the gadget man" when the two played together on the Toronto Blue Jays in the 1980s.

Fernandez, Martinez recalled, could always pull out all the tools when he needed them.

Fernandez, a five-time all-star and one of the greatest infielders in Blue Jays history, has died, according to a statement from the team. He was 57.

The 1993 World Series winner had battled kidney problems for several years. He was first hospitalized with polycystic kidney disease in 2017.

WATCH | The legend of Tony Fernández: 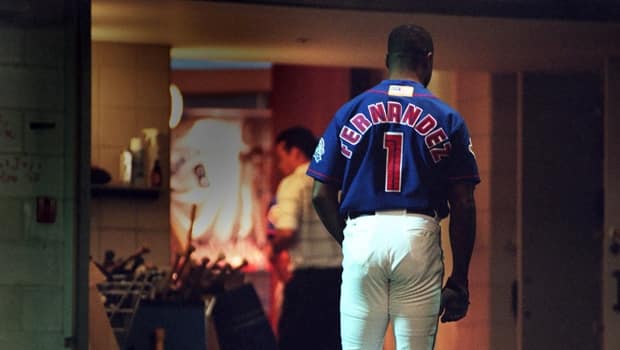 "For me, he was a cornerstone of the winning tradition of this organization when he came up in the early 80s," Martinez, now a Blue Jays broadcaster, said Sunday at the team's spring training camp in Dunedin, Fla. "He kind of solidified the middle of the infield.

"He was one of those multi-talented guys who could do a lot of things to help you win. A terrific person, first and foremost. I feel sad for his family, his wife and his kids."

My heart is so heavy at the loss of former teammate, friend, and Champion Tony Fernandez. My prayers go out to his wife and their entire family. I will never forget this man. He influenced my life in a positive way. He made everyone around him better. RIP my brother. <a href="https://t.co/lMZpgYqKed">pic.twitter.com/lMZpgYqKed</a>

Fernandez was in critical condition in an induced coma at a Florida hospital two weeks ago after developing pneumonia.

A statement from the Blue Jays called Fernandez "one of our club's most celebrated and respected players."

"Enshrined forever in Blue Jays history on the Level of Excellence, Tony left an equally indelible mark in the hearts of a generation of Blue Jays fans during his 12 unforgettable seasons with the team," the team said.

We were playing Cleveland and he pinch-hit in the eighth. His spot had come up in the ninth, but he had gone home. That was Tony.— Ex-Blue Jays catcher Buck Martinez on former teammate Tony Fernandez

"His impact on the baseball community in Toronto and across Canada is immeasurable. Our deepest condolences are with the Fernandez family during this time."

Joey Votto today honored the late Tony Fernández with a message on his cap. A four-time Gold Glove shortstop, Fernández's career spanned 17 major league seasons including 12 with Votto's hometown Toronto Blue Jays and one season with Cincinnati (1994). <a href="https://twitter.com/hashtag/RedsST?src=hash&amp;ref_src=twsrc%5Etfw">#RedsST</a> <a href="https://t.co/dyuh8vVTlE">pic.twitter.com/dyuh8vVTlE</a>

The Dominican-born Fernandez, who spent much of his time at shortstop while also seeing time at second and third base, played 12 seasons over four stints with the Blue Jays. He is the franchise leader in games played (1,450), hits (1,583) and triples (72).

Martinez was Toronto's manager during Fernandez's last stint with the Blue Jays in 2001. Martinez recalled Fernandez's final game, in which he left the stadium early following a pinch-hit appearance in the eighth inning, assuming his day was over.

"We were playing against Cleveland, and he pinch-hit in the eighth. His spot had come up in the ninth, but he had gone home," Martinez said with a laugh. "That was Tony. That's the way Tony was, and everyone understood that. Chris Woodward had to hit for Tony, the pinch-hitter."

I’m so sorry to hear about Tony Fernandez passing. A great teammate and friend. A pitchers dream to have him at shortstop when your pitching. One of the best ever. R.I.P. my friend.

Fernandez's defence also was a huge part of his game. He won four straight Gold Glove Awards with the Blue Jays from 1986-89 and was a five-time all-star.

Originally signed by the Blue Jays in 1979 at the age of 17, Fernandez grew up in humble surroundings in the Dominican Republic.

He first learned to catch using a milk carton as a glove, then went on to win four straight Gold Glove Awards with the Blue Jays from 1986-89.

"He was that talented and that's basically how he built the foundation of a Gold Glove career," Martinez said. "But I think that's why kids liked him, because he was so enthusiastic.

"He brought so much joy to the game and when he ran onto the field at Exhibition Stadium it was a situation where he was playing for the love of the game and that came across to the audience."

Asked which defensive plays by Fernandez specifically stood out, former teammate Devon White recalled one from Sept. 25, 1987 — before the outfielder was even with the Blue Jays — in which Fernandez broke his elbow during a game against the Detroit Tigers.

Toronto was 1 1/2 games up on Detroit in the race for the American League East crown, but capped the season with seven straight losses without Fernandez in the lineup. The Blue Jays would finish the season two games behind the division-winning Tigers.

"We flinched when we saw that [injury] because he was a good guy all around and a good player," White said.

Dealt to Padres in Alomar trade

Fernandez, who made his major-league debut with Toronto in 1983, was part of the Blue Jays' first two playoff teams in '85 and '89 before he was dealt in a stunning, blockbuster trade after the 1990 season.

Alomar, now a Hall of Famer, and Carter helped anchor the Blue Jays as they won World Series titles in 1992 and '93. Carter hit the walkoff homer that gave the Blue Jays the '93 title over Philadelphia.

Fernandez, however, also was a key part of that '93 team. He had nine runs batted in and posted a .333 average over the six games against the Phillies.

The Blue Jays had re-acquired the pending free agent in a mid-June trade with the New York Mets, who had picked him up in a deal with San Diego after the '92 season. Toronto had a hole at shortstop after Dick Schofield suffered a season-ending injury.

"Just him coming back and knowing what he was capable of doing, it gave us a big lift," said former teammate Devon White, now a member of the coaching staff on the Blue Jays' triple-A affiliate.

Fernandez batted .306 in 94 regular-season games for the Blue Jays in 1993. He posted a .318 average in the American League Championship Series against the Chicago White Sox and had a .423 on-base percentage against the Phillies.

Added to Level of Excellence in 2001

After stints with the Cincinnati Reds and New York Yankees, Fernandez fell just short of winning another World Series with Cleveland in 1997 as the Indians lost in Game 7 to the Florida Marlins.

Fernandez returned to the Blue Jays for two more years starting in 1998. He made the all-star game in 1999 before spending a season in Japan.

Fernandez finished his 17-season major-league career playing 48 games for the Blue Jays in 2001 after he was released by the Milwaukee Brewers.

Late in the 2001 season, the Blue Jays put Fernandez on their Level of Excellence at Rogers Centre. Fernandez was the seventh recipient of the honour, and the second infielder after Alomar.

After his retirement, Fernandez was inducted into the Canadian Baseball Hall of Fame and the Ontario Sports Hall of Fame.