No team logo for Roy Halladay's plaque in Hall of Fame, widow says

Roy Halladay's widow says his Hall of Fame plaque will not include a Toronto Blue Jays or a Philadelphia Phillies logo on the cap.

Roy Halladay won't be have a logo on the cap of his Hall of Fame plaque, and Mike Mussina wants some time before giving his opinion to the Hall, which makes the final decision.

Halladay, who died in November 2017, spent 12 of his 16 seasons pitching for the Toronto Blue Jays and four for the Philadelphia Phillies. Mussina was with the Baltimore Orioles for his first 10 seasons and the New York Yankees for his final eight.

Hall spokesman Jon Shestakofsky said in an email Wednesday the decision had been made for Halladay's plaque to have no logo.

Manager Tony La Russa, and pitchers Greg Maddux and Catfish Hunter are among other inductees with no logo.

"We decided. We talked about it," Halladay's wife, Brandy, said after the news conference, flanked by her sons. "There's no way to decide between the two teams, and I know we've spent the majority of our time in Toronto. Toronto gave us that chance, that base at the start, but Philly also gave us a chance to win and the passion that we wanted, and there's no way to choose and so we decided that he'll go in with no team." 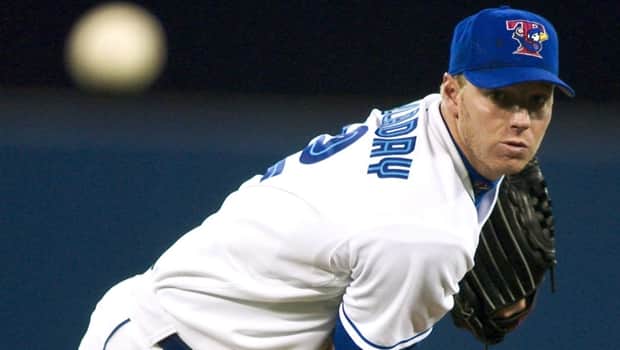 2 years ago
1:04
Former Blue Jays ace, the late Roy Halladay, is one of four members of the Class of 2019 that will be enshrined in Cooperstown. 1:04

Halladay was drafted 17th overall by Toronto in 1995 and represented the Blue Jays at six all-star games.

He enjoyed playoff success with the Phillies — throwing a no-hitter in his first career post-season start in 2010 — and also had a perfect game with Philadelphia against the Miami Marlins earlier that season.

Halladay won the Cy Young Award twice, taking the American League honour in 2003 with Toronto and the National League one in 2010 with the Phillies.

He signed a one-day contract to retire as a Blue Jay in December 2013.

Halladay was inducted into the Canadian Baseball Hall of Fame in St. Marys, Ont., in the summer of 2017.

Mussina was annoyed when asked with the final question of the news conference.

"Made it all the way through this whole thing — you gave him one last question," he told Shestakofsky, who moderated the question-and-answer session.

"I almost split my career down the middle with two organizations," Mussina said. "Right now I couldn't sit here and choose one or the other. They're both instrumental in me sitting here. So, I think that we got a little bit of time here to talk it over with the Hall of Fame and with the people there."